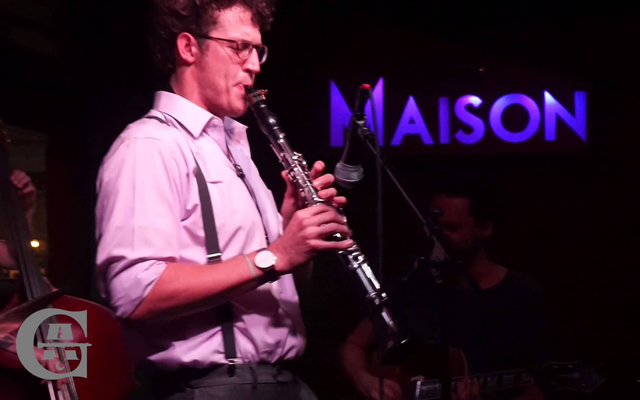 Most –if not all – instruments ‘react’ to the virtuosity with which they are played. But the clarinet isn’t simply an instrument. That black (or burgundy) ‘licorice stick’ doubles up as an unforgiving mistress, especially when not treated ‘gently’ as Sidney Bechet, the greatest of all paramours of the clarinet put it. Somehow, no brass, woodwind, stringed or reed instrument has ever sounded quite like the clarinet, when it is made to cry and whisper as the reed is caressed by the player’s tongue and lips. The sensuous moans and whoops of delight let in on lovemaking when the clarinet and her paramour are locked in an often seemingly illicit embrace. To have watched and listened to Bechet, George Lewis, Alvin Batiste, Barney Bigard, Jimmie Noone and Don Byron and New Orleans’ other beloved clarinettist, Evan Christopher as I did, like a jealous interloper, is to experience this amorous coupling in all its glory with Gregory Agid and his clarinet as well. 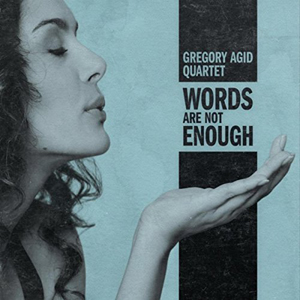 The discovery of a ‘young lover’ in the form of Gregory Agid, a true descendent of such rakes as Bechet, Lewis, Bigard, Byron and Batiste, who fostered Agid in New Orleans, is as exciting as unearthing a relic. Agid has learned how to use long, graceful fingers to caress and arouse his ‘lover’ like a master of seduction. Gregory Agid’s unabashed musical love-making of his “mistress’ has such seductive physical power, that it recalls the fabled, shape shifting character of Triso De Molina’s El burlador de Sevilla y convidado de Piedra (The Trickster of Seville and the Stone Guest), whose name “Don Juan” he might easily claim, not just for his rakish manner, but for the undeniably sinful seduction of this woman, “his clarinet” to produce glorious stories in song and thus ensure womanizing ways still merit a trip to the resurrection. It is wholly appropriate to play three tracks on Agid’s second recording, Words Are Not Enough forthwith: “Prelude to a Kiss”, “Sweetie” and “Undying Love” in that order before listening to the in the order that the songs have been laid out. The former is a combination of lyrical prowess and vocal flexibility sustained by a woody, emotional mood of the music that brings a poetic embrace to life and would have even melted the heart of the man Johnny Griffin called “Rabbit”. “Sweetie” is vivid, playful, and “Undying Love” simply dazzles with the sheer accuracy and synchronicity of pitch and rhythm, dynamism and aural splendour.

Having thus been left speechless, now might me a good idea to take in large mouthfuls of air while listening to the album at reasonably high volume, sitting in a comfortable chair. At the epicenter of Gregory Agid’s playing resides a musician who has cultivated the sophisticated and sonorous style espoused by his most important teacher: Alvin Batiste. Based on the evidence that has ensued in the form of the music on this disc, not only is “the tradition” gloriously intact, but like in the work of Wycliffe Gordon, Michael Dease, Ambrose Akinsmuire, Leigh Pilzer (and her pride of young lionesses), and Ibanda Ruhumbika – to name but a few of an emerging generation. It would not be an exaggeration to also say that just as those musicians do, Gregory Agid disappears into the music and yet manages to subsume his musical personality in spinning a delicate musical spell. He does so in slow chords in different registers which might give way to loud, jagged, broken phrases or pizzicato outbursts underpinned by sustained, muted sonorities. This happens through the music, when you least expect it. And just when you least expect it – as in “Nevermore’ and Salty Dogs” – the music reaches a climax in the final seconds in the form of loud, sliding chords, before winding down in quiet majesty. This is an album to absolutely die for.