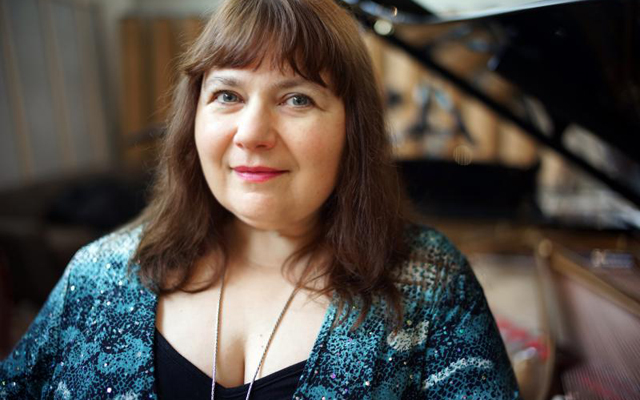 Yelena Eckemoff is a singular musical voice. With every new performance in the studio or on stage Eckemoff puts a greater distance between herself from virtually all other musicians – pianists or otherwise. Every time that you listen to her and believe that that you have finally figured what she is ‘trying to say to you’, or believe that it is safe to give voice to her voice, it changes – not ever so slightly, but dramatically. It’s not as if you don’t know who she is anymore. It’s just that you feel as if you’re meeting someone who looks and sounds vaguely familiar, but then you soon realise it’s someone else; not in a frustrating, or in an agonizing manner either. Eckemoff has just enough of the ‘changeling’ in her to constantly elude you in every sense of the term: she is from the realm of the fays; a Tuatha Dé Danann who comes to life just long enough to make a tantalisingly beautiful record. 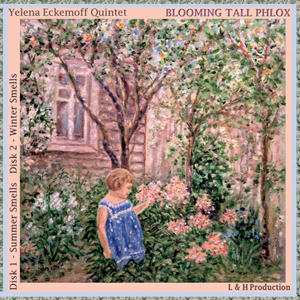 Eckemoff’s Blooming Tall Phlox has been positioned as her tenth album “since shifting gears from the classical music of her early career”. However, in this music one hears ghostly echoes of that music and an ethereal cosmos of other aural palettes, which assault the senses of the brain as if the memory was educing something so vital that it just had to be remembered. There is a science for that. Dr. Lewis Thomas writes about it in On Smell, one of ten unforgettable essays in his great collection Late Night Thoughts on Listening to Mahler’s Ninth Symphony. The magic of the olfactory jumps excitedly to mind because in all the fifteen pieces of music on these two discs, powerful smells trigger a myriad of magical memories, each of which somehow, equally magically, of course, is transformed into a moveable feast of sounds – melodies set free by Yelena Eckemoff on a gloriously tuned piano and harmonised by Verneri Pohjola, a young Finnish horn player, together with Panu Savolainen on vibraphone, Antti Lötjönen on bass and the percussionist colourist Olavi Louhivuori.

Not unexpectedly, Yelena Eckemoff embellishes the music with words – which in this instance have been written in irregular metre. Brought up on a heady mix and constantly changing mixture of classical and jazz music, one is torn between the extremes of Miles Davis – who frowned up on notes to music – and the scholarship of music historians and factotums without whose notes the study of Bach, Beethoven and Brahms was expressly forbidden. In the case of Blooming Tall Phlox your approach to this music will be suitably enriched. Disk 1 recalls the often sinfully delicious aromas of “Summer Smells”, as the pianist choose to subtitle the disk. “Old-fashioned bread store’, ‘Fish fried on open fire’ and ‘Pine needles warmed by the sun’ are particularly alluring. In the former piece, the moisture and viscosity of ‘greasy wooden shelves/(Are) soaked with the hearty odor of generations of/Loaves, baguettes, boules, kuliches, bagels and rolls…’ and somehow Eckemoff makes sure that you are able to separate the harmonically bittersweet berceuse of carefully gauged intensity in the exchanges with Savolainen’s vibraphone.

Disk 2 features music that is just as highly characteristic, intense in feeling, restless (sometimes), harmonically rich and well worth getting to know. This time Yelena Eckemoff conjures “Winter Smells” and each of the seven miniatures, no matter how unexpectedly brief, are equally poignant, slow and often fugal, and concentrated . “Smoke from the house chimneys in frosty air” beckon as the ‘snow crunches under the feet’ herald the welcoming ‘holiday cheer’ that no matter how dark and lonesome it is under ‘the low-hanging winter sky’ the music – especially that released from the resonating bell of Verneri Pohjola’s horn is always beckoning. Throughout, of course, the music is surrounded by a tonal style that embraces a wide array of influences from the traditional and the modern, the preternatural to those anchored in the cold, naked sod. At every turn is a witty interplay between the musicians – whether in the arco playing of Lötjönen, punctuated by the tuneful rat-a-tat of Louhivuori’s drums and Savolainen’s tinkling vibraphone. Always, too, is heard the many-splendoured playing of Yelena Eckemoff – sometimes shining in a short solo whose scampering vivace passages which alternate with the gloss and glitter of a more stately andante.

Yet it is a performance, the like of which will never be the same the next time around because – well – that’s just how things are with Yelena Eckemoff.