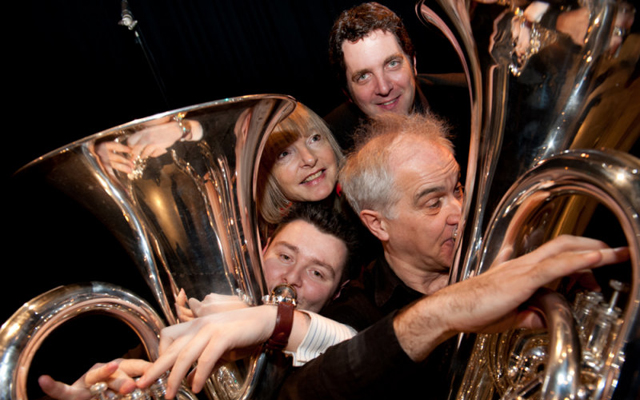 Andy Scott and Group S’ handling of the life-affirming Ruby & All Things Purple which in the hands of this large woodwinds ensemble grows into a full-fledged orchestral experience, embraces the gamut of colours and technical high jinks called for with what sounds like genuine relish. Here also is repertoire marked by its exuberance and transparence, thanks in part to its orchestral dimensions and the ramping up of musical drama a few more notches.

It takes Scott absolutely no time to relax into the music; the first chart “Ruby & All Things Purple” almost immediately revealing all the diligence of a mature conductor doing his duty by the deities of Bog Band Jazz with due obsequiousness. The result is straightforward, frill-free playing, with a keen ear for phrasing and detail. The musicians paint the musical landscape vividly, whether in “Ruby…” or in “Little Glass Box”, “Salt of the Earth” or, 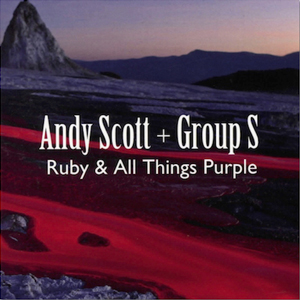 augmented by orchestral guests Barbara Thompson on tenor saxophone and Jon Hiseman on drums, in the vaunted elegance of “La Grande Image”.

None of the pieces are terribly long, which suggests again, that fluff is down to the absolute minimum and that the music is made of sinuous ensemble and soli. And here you have an open and shut case because Andy Scott has employed Britain’s finest and leads the emotional charge himself. There is also the presence of Gwilym Simcock on piano, James Pusey on guitar, Elliott Henshaw on drums and Laurence Cottle – whose only sin is that he steers too close at times to Jaco Pastorius – on bass guitar. Together with this heavyweight rhythm section the winds whip up a heady cocktail of all things purple, and sulphur and fury including mesmeric soli when called upon to do so.

“Sex Bomb” is, for me, where the charge is lit. It is often at towards the end of a recording that musicians toss off phrases and chords as afterthoughts and sometimes, throwing caution to the winds, might even jettison a performance altogether. But on the tenth chart Andy Scott and Group S find every reserve of raw energy and theatricality to bring to the music. There’s plenty left over for “Salt of the Earth” and the finale is gritty, explosive and noble; a revolutionary zeal almost…But don’t get up from the edge of your seat for Barbara Thompson joins Andy Scott and Group S, with Jon Hiseman for one last hurrah on “La Grande Image” before the curtain falls on this splendidly performed and superbly engineered repertoire.