Home Masthead The Purified and Elevated Passion of Satoko Fujii 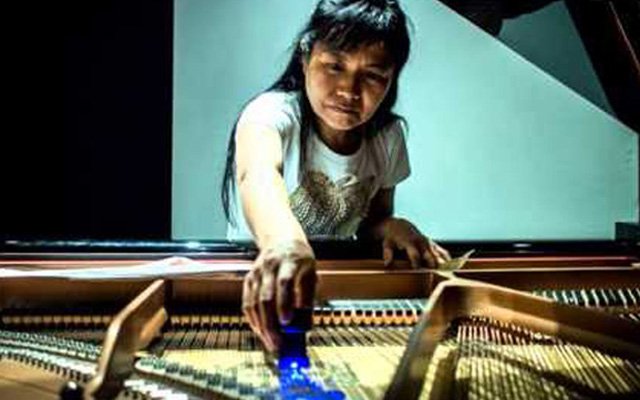 This is a joyous, dancing, five-part piece with Mr Spence conducting and the Orchestra Kobe led by Miss Fujii making the black dots leap off the page. The work features thoughtful, melodic and often slightly mysterious soli with Miss Fujii continuing to ring in the changes in mood, structure and tempo, making for a constantly interesting programme. The considerable degree of balance and integration of melody, harmony and rhythm, of composition and improvisation, of exploration, individuality and tradition is impressively maintained throughout this magnificent long work by Mr Spence. 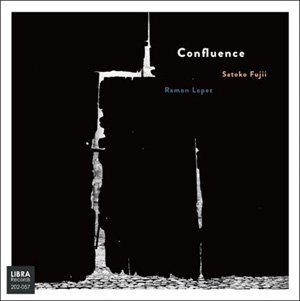 Confluence is a duet album also featuring the Spanish drummer and percussion colourist Ramon Lopez. Duets with drummers are not alien to Miss Fujii – although she is more widely-known for her duets with Mr Tamura – and those familiar with her work will recall piano-drum duets with Tatsuya Yoshida and Tom Rainey. This one with Mr Lopez differs, somewhat from the others. As the title may suggest it is a meeting of minds. But in the burgeoning present and advancing future of Miss Fujii’s life in music her artistry is becoming markedly more probing; infinitely more transcendental than anything she has approached in the past. As piano-drum/percussion duets go her music has begun to describe a musical architecture all its own – considerably different from the ones alluded to in the booklet notes written by Shiro Matsuo and also different from the more experimentally “outward-bound” duets of even Irène Schweizer and Han Bennink, which comprise a geometry of made up of lines and curves, not that different from those of the wild ones of Anthony Braxton and Gerry Hemingway.

On this elemental recording she plays water, while Mr Lopez plays earth and as the two elements collide music that is viscerally energetic ensues. It is a kinetic energy that begins with what seem like waves of water skittering in gentle ripples; then tumbling in foaming, cascades and thrashing waves. Meanwhile, Mr Lopez responds as the rocks and sand would, by answering the rhythm of each melodic wave with reverberating rattles and rolls, ebulliently chattering cymbals that also often hiss and whisper with a kind of diffident sensuousness. The music takes us to many places always with a sense of freedom in the musical voices as the players head into the countryside of improvisation becoming part of a natural landscape that mixes beauty (“Quick Shadow”) and danger (“Run”) and the sound of vivid tastes (“Road Salt”) and dying light (“Winter Sky”). It is an album of deathless beauty. 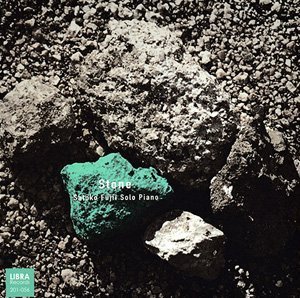 The fourth recording that Miss Fujii has released in 2019 is Stone and it is a quietly monumental and – in the end – a truly thrilling work. On it Miss Fujii’s imagery, although intensely concrete, seems to also traverse realms that would appear reflective, refractive and abstract. Alone with her piano, we see the artist, who begins her expedition with a silent intake of breath and then a sigh before she begins her journey into the bowels of the noble instrument that captivated the greatest composers and players of programmatic and improvised music in the centuries since it was developed. It ends up being a journey into a labyrinth. It is a sort of spiral or infinite journey that will surely lead to The Way through the quandary and confusion of artistic “lostness”.

Incidentally, once The Way has been found – as Miss Fujii has determined in this musical expedition – it must be travelled. It will surely be the start of another, arduous journey that demands even more arduous travel, including one to the nether world, the dark depths. This is the true journey that will result in an ascent by resurrection as the centre of the proverbial labyrinth; the spiral at the heart of the artistic “lostness” that leads the peripatetic musician to the centre of the heart of the artistic work that beckons and must be released – in this instance – from the fingers of the pianist, Miss Fujii. Our senses – if they are fully engaged in the process of listening – will join Miss Fujii as, under an unspoken Law of Cycles, we bear witness as Miss Fujii is led back to herself, producing a kind of self-confrontation through the gentle gong-like ostinato of “Shale” followed by the turbulence of “Lava” until she is led by her artistic endevours to the self-discovery in a performance of Norikatsu Koreyasu’s “Eternity”.

It is a kind of Way to Heaven, which is – as Lao-Tzu once said, “is always with the good man”. Only in this case it is a woman and she is the inimitable improvising pianist Miss Fujii who emerges from the guts of the piano benumbed by the beauty that she hears in her inner ear; something she shares with us as never before on this remarkable recording.