Home Imperatives Rise Like Lions: The politics of Shelley’s “Mask of Anarchy”

200 years after it was penned, Jacqueline Mulhallen explores the politics of Shelley’s great poem

Many poems were written in response to the Peterloo Massacre and were published in the radical press (see Alison Morgan, Ballads and Songs of Peterloo, Manchester University Press, 2019), but the poem which has lasted until our own day and which has been described as the greatest political poem in the English language is “The Mask of Anarchy” by Percy Bysshe Shelley. It was not published in 1819 but in 1832, ten years after Shelley himself had drowned in a sailing accident in Italy. Leigh Hunt, the editor to whom Shelley originally sent the poem, was afraid to publish it in 1819 because of the repressive laws against ‘sedition’, but the poem was still appropriate in 1832 when once again there was agitation for reform of Parliament and he published it then.

It became immediately popular, and remained so among the Chartists and, later, among the suffragettes. In 1911, the striking garment workers of New York (the Rising of the 20,000) chanted it on the demonstrations and so did the demonstrators in Tiananmen Square in 1989. The phrase ‘Ye are many – they are few’ has been used by poll tax campaigners, the Occupy movement and now by the Labour Party with Jeremy Corbyn reciting the lines beginning ‘Rise like lions after slumber’ at Glastonbury, 2017. Its popularity and longevity was perhaps because it was not just a personal response to Peterloo but a political commentary on the politics and politicians of the day and so put the event into context. And also because it is a beautiful, striking and dramatic poem and one which used a style and imagery immediately familiar and popular with working people.

Shelley selected a ballad form, one which is extremely easy to follow and to remember, and which has been popular since the Middle Ages in English, Irish and Scottish literature and later in American and Australian literature. It was the traditional form used to tell of great events from the Ballad of Otterburn to 18th century themes of adventure or injustice and was used by Bob Dylan in the 1960s. Shelley does not use the form slavishly, but varies it. He sometimes adds extra lines to a verse and also varies the rhyme scheme and the rhythm. It is full of imagination and political thought and – despite its ghastly theme – wit and humour. Gallows humour is something the working class have always appreciated. “The Mask (or Masque) of Anarchy” draws on other forms of popular 19th century culture, such as the prints displayed in print shop windows – people would crowd outside to see the latest – carnival, and pantomime with its Harlequinade and fairy story characters and magic transformation scenes. 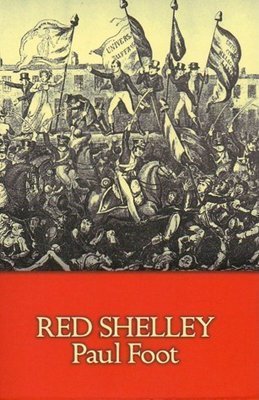 Like other ballads, the poem is told as a vision seen by Shelley as he ‘lay asleep in Italy’, (p. 87) which includes the visionary ideal, the historical, the commentary on current events. The opening lines describe a huge carnival procession, the Prime Minister, Sidmouth, the Lord Chancellor, Eldon, and the Foreign Secretary, Castlereagh, riding in triumph, richly clad. The masks they wear reveal their true nature: Hypocrisy, emphasised by the crocodile Sidmouth rides, Fraud and Murder. The figures would have reminded 19th century readers of the scene in pantomime when the figures of fairy tale lost the huge papier maché heads which portrayed their roles and were transformed into abstractions. The characteristics are interchangeable – all of them can be Fraud, Hypocrisy and Murder – and they would have been easily identifiable at the time. We may supply modern equivalents since the politicians of our own day have different names but have not changed their nature.

Riding across Britain suggests the way in which the ruling class destroy both the environment by constructing their mills and mines, and the working people by imposing their laws, waging war, and, by arbitrarily closing works, cause unemployment and starvation. They all worship Anarchy, ‘GOD AND KING AND LAW’ characterised by a Skeleton that looks like ‘Death in the Apocalypse’ (p. 88) – familiar to workers from prints of Thomas Rowlandson or Benjamin West. Anarchy is wearing a ‘kingly crown’ and Anarchy ‘bowed and grinned to everyone/As well as if his education/Had cost ten millions to the nation’ (p. 89) in a royal gesture – royal ‘education’ is indeed very expensive! The image is comical, but Anarchy symbolises religion, law and monarchy, all that the ruling class claim as their justification for what they do, which cloaks the chaotic system of capitalism. This allows Anarchy to proceed to the Tower of London and the Bank of England to seize the nation’s wealth and then to the Parliament where he has all the MPs in his pocket (‘pensioned’ as Shelley says). The whole parade rouses our horror and at the same time we laugh in contempt – a very healthy reaction when looking at the ruling class as it counteracts fear.

This is interrupted by a startling event. A ‘maniac maid’, Hope (who looks ‘more like Despair’), ‘fled past’. Hope’s wonderful lines

“My father Time is weak and gray
From waiting on a better day;
Look how idiot like he stands,
Fumbling with his palsied hands!” (p. 90)

evoke for us protest after protest, demonstration after demonstration, broken promises, and indeed, poor and frail elderly people who have spent their lives working and bringing up children and whose hopes of a better life for them have been disappointed. Those at Peterloo were hoping for ‘a better day’. We are still waiting.

In a dramatic gesture, Hope lies down to stop Anarchy reaching his goal and we believe she will be trampled. The willingness of the ‘maid’ to die rather than see Anarchy succeed is the first sacrifice in the poem, reminding us that revolution involves sacrifice and bloodshed. It suggests the maidens sacrificed in mythology and fairy tale, but she is also a symbolic figure. Shelley, who had studied the French Revolution for his poem “Laon and Cythna”, was aware of how committed women can be to a revolutionary cause. Through Hope, he invokes his mother in law, Mary Wollstonecraft, and inspired the Chartist women, suffragettes and the New York garment workers who would all love this poem. Hope’s sacrifice produces ‘a vapour’ which grows into another allegorical figure, a kind of medieval armour-clad warrior, a fighting spirit which grows and passes over the heads of men. This spirit kills all the monsters on parade, and Anarchy and his murderers are dead. Hope – no longer like Despair but ‘serene’ – is walking ‘ankle deep in blood’. She is strong again and has inspired everyone else. The spirit of the class has been strengthened by the unity which inspires us, just as it was after the Peterloo Massacre.