Everything about this recording by Cecil Taylor: Return Concert at The Town Hall, NYC, November 4, 1973 screams the word ”Legend…”From the fact that two university undergraduates who ran their proverbially renegade college radio station that played Mr Taylor’s music [and the work of other outbound musicians] 24 hours of the day; to the use of high-end Neumann microphones that seemingly ‘fell off the truck’. And then there’s [naturally] the quality of the recording, extraordinarily evocative booklet notes that bring the whole event breathlessly alive… And the sublime music itself… played by one of the most iconic composers and performing pianists of the 20th century. 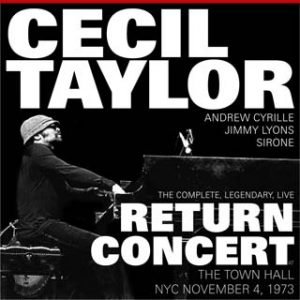 Remember that this performance – and recording – was made in the winter of 1973. Why is the date significant? Cecil Taylor had begun to occupy the high-ground on the outer periphery of the arc of our spinning planet. He was swinging and dancing in a monumental ellipsis, a musician/poet/dancer pirouetting in a balletic arc. His music evoked the rustle of raw silk, and his references were wide-ranging: from is American Blackness to his mother – a pianist and violinist, and dancer – and the path-breaking Europeans, Bela Bartók and Karlheinz Stockhausen, who redefined so-called “art music” from the 1950’s onwards.

Although [relative to the musicians of the so-called American “avant-garde” – Ornette Coleman, Don Cherry and others] Mr Taylor was still very much a musical outlier. The line from Duke Ellington was much shorter and more of a “direct line” so to speak, because, like Mr Ellington, Mr Taylor was a dancer – albeit a lonely one. Perhaps he resembled a ballet dancer more than anything else even when you were listening to the sound of his music [without a visual reference]. In fact, when you closed your eyes, Mr Taylor appeared to be “dancing” [not just evoking dance] on and about the piano as well as playing the grand instrument. 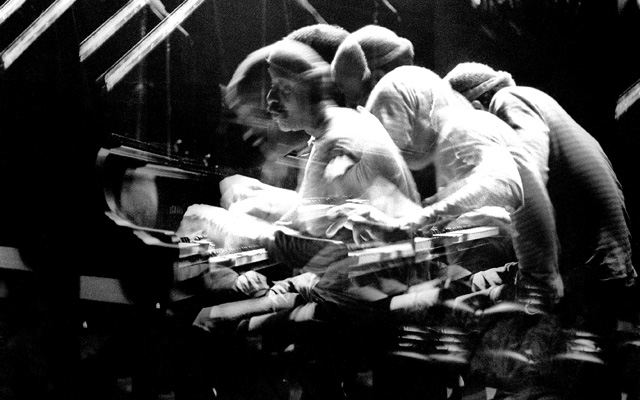 This set him apart from even the Europeans who made an impression on him, and once put that together with his the rhythm of his “African-American Blackness” he was one of a kind, a diamond mined from the source deep inside the throbbing earth from when he was born and raised. And on this very earth Mr Taylor spun on an axis all his own, drawing forward-thinking musicians to himself like proverbial moths to a flame. The Cecil Taylor Unit [Structures] was born out of this cultural/topographical/architectural association.

Reviewing [music or any record of a performance art] can be a frustrating experience; recordings that bode so well on paper disappoint enormously in reality. Others feature fine playing, but the recordings are severely compromised by poor recorded quality. It’s rarely – if at all – that you come across one as spectacular as Mr Taylor’s Return Concert – Live at The Town Hall, and that too, being presented in its entirety.

It’s so eloquent a performance [by all concerned], and so spectacularly recorded. Everything seems to have come together by a set of miraculous circumstances. And so spectacular is the [listener’s] and reviewer’s experience that one is tempted to dance down the street, this music blaring from an old-fashioned boom-box, giving away copies of this record to anyone really. It’s that good…

From 1973 to 2022, it has taken is almost 50 long years since the music was performed for this concert to be available for aficionados of great music – in its entirety. Part of the performance was released – Spring of Two Blue J’s [1974] – was heralded as a high watermark of Cecil Taylor’s music. He had already broken fresh ground with members of this [Cecil Taylor] Unit: alto saxophonist Jimmy Lyons, bassist Sirone and drummer Andrew Cyrille.

All the musicians who were now a “unit” were well-schooled in Mr Taylor’s artistic vision and musical conception. This, it nears mention, was far removed from the musical fast lanes that the pianist had traversed with John Coltrane [Coltrane Time), Hard Driving Jazz (1959)]. The ancestral line was much more defined with Duke and Thelonious Monk – albeit the fact that the line was oblique and fading fast as Mr Taylor raced into the “proverbial blue” sky of his own.

It also bears mention that [historically] only part of the concert – the second set Spring of the Two Blue J’s was released by these visionary producers – Fred Seibert, with Alan Goodman, David Laura and Jeff Adler. Now the first set – the entire “Autumn/Parade” – featuring both the pianist’s solo performance and his quartet performance as well. But this 1973 music had both historical and preternatural value as in the intervening years Mr Taylor had blazed a new trail that went from earthbound to stratospheric, thanks to his evocative melodic, harmonic and rhythmic flights.

Undoubtedly Mr Taylor’s [and the other musicians’] immersion in the streaking arc of this extended work: “Autumn/Parade” defines the “legendary” bit of this release. From right out of the gates Mr Taylor combines a haloed sound with a sense of dance/drama and an unerring instinct for pacing. In the solo passages [or part] of this music, the pianist combines fine-tuned intellectual acumen with a still more vivid palette. The fire-hot opening is a miracle of colouring, combined with a sure visually poetic narrative sense of colouring – as if the music possessed a text as the music grows in turbulence and spectacle.

Time and again you marvel at the confidence, the finesse and refined musicality of Mr Taylor’s playing. It’s the kind of playing, in fact, where comparisons [with Duke and Mr Monk, for instance] cease to matter. In this solo venture, the pianist brings out an almost Wagnerian panache of the writing. Few pianists would dare to drive through those opening chords quite independent [one may add] of his flying fight hand, which often, in turn, seems to drag his left [harmonic and rhythmic] hand in its wake.

At the same time, balancing the sheer variety of nuance in his quieter playing, not the least in the relatively slower movements, with its restrained rhetoric Mr Taylor brings out the music’s core with perfectly judged tempo. In his hands the symphonic range of the music is raptly caught and passed on to the saxophonist, bassist and drummer who undertake this sojourn with him. The dramatic ambiguity and changeability of mood, together with the twisting shifts of key – are all perfectly handled.

Special highlights come when the pianist hands off the music to the first soloist – Jimmy Lyons – and the saxophonist literally takes off into his own stratosphere propelled by the driving energy and drama of the pianist’s creation. And then there is passagework – in both “Autumn/Parade” and [the quartet] moment of “Spring of Two Blue J’s”.

This comes as the pianist hands over to the bassist, Sirone, when the piano falls silent and, after a brief repose, the sound of the contrabass breaks out of the music’s circle of fire, as if it were an errant tongue of fire itself propelled from the core of the blue flame. Thus the piece reaches a new level of expression with the kind of preternatural sojourn, loping and dancing, and flickering – in magical pizzicato “brush” strokes that defined the quartet’s interpretation of Mr Taylor’s musical conception.

This kind of music is up there with Mr Coltrane’s spiritual adventures, and with Charles Mingus’ seminal epic and tone-poem Black Saint and the Sinner Lady. Mr Taylor’s playing is ferociously eloquent, Brecht-like in its dramatic pianism and interaction with the other musical players. The solo piano is superbly sculpted into the torso of the quartet performances of both works. The whole record of this questing, ravishing music is magically captured in a simply gorgeous recording.