The excellent booklet notes accompanying the extraordinary 2020 recording – New York Paradox – by Omer Avital Qantar likens his approach to performance and leadership to Charles Mingus. Ordinarily one would frown on such a potentially vaunted comparison. Bu there is a deep musical – one may posit, even spiritual – kinship between the great Charles Mingus and the younger acolyte, Mr Avital. Consider the fortuitous cultural topography – the heritage – of the young man: Yemenite Jewish melded with Moroccan – one of which produced the great Ofra Haza and the other drenched in the tradition of redolent of the high and lonesome aita and ahwash… not to mention the darkly thrilling guedra of the “blue people”. 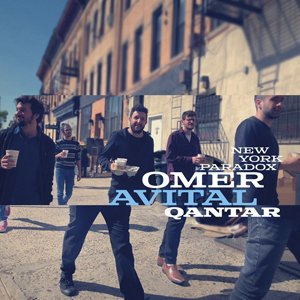 Mr Avital rose to eminence playing with a group of young Israeli artists – among them the ineffably brilliant clarinetist [and saxophonist] Anat Cohen and her brother Avishai Cohen [the trumpeter], drummer Jason Lindner – before descending upon New York to raise his game with the likes of saxophonists Myron Walden and Mark Turner, pianist Aaron Goldberg, drummer Ali Jackson and others. But perhaps his greatest claim to fame may be this marvellous ensemble, Qantar, a group that has grown in the enormous power of its sound, propelled by a deeply bluesy – and more often – rippling, jazzy groove. Certainly this volcanic mix may be experienced all over the repertoire New York Paradox.

But let’s not forget where Mr Avital comes from – culturally-speaking, of course. The eloquent yet sinuous music of this recording speaks to the magnificent collision of the Israeli from the High Atlas and the hefty bounce and swing of the Big Apple. It’s very likely that in Mr Avital’s composition and in his performance guedra rings as true as the blues of the Black American – and it doesn’t get any more real in the comparison with Mr Mingus. Indeed, blue thunder may be all the rage in the depth-defying gravitas and redolent of a rumbling growl in Mr Avital’s playing of his contrabass. This is clear, after all, in the music of “It’s All Good [Late 90s]” and “Today’s Blues”. But there is also a profound tenderness in this music by Mr Avital and Qantar.

This makes it sound almost like the Portuguese sense of saudades and which [again] is not so surprising, considering the fact that the Arabic [Al-Andalus] influence on North African and Southern European culture from the 8th and 15thcenturies. The Umayyad’s [and Almoravid’s] did, after all, also “have a say” in that sense of longing too – being themselves so far away from their original home in the Arabian Peninsula. Consider the wailing longing that forms the fiery undercurrent of “Shabazi”. More than that is, however, the ineffable longing of “Zohar’s Smiles” and – best of all – “Bushwick After Dark.

The apogee of this recording could well be “New York Paradox” – the song. The emotional commitment to essence in this music, its sublimity buttressed by the outpouring of feeling, often completely ignoring metronomic indications of semiquavers make it impossible not to succumb to the mystique of its melody, harmony and rhythm. Of course, Mr Avital does not achieve all of this on his own. He has – with infinite wisdom – shaped this ensemble by employing striking musicians such as saxophonists Asaf Yuria and Alexander Levin to play lead characters in each melody and harmony. And his wall of sound is crafted with a power-trio of his own making, which also includes pianist Eden Ladin and drummer Ofri Nehemya. Each musician is eloquently attuned to Mr Avital’s artistry and vision. This is the kind of stuff that makes for great music such as this… which is just the kind of thing that powered the great ensembles of Charles Mingus, making for the monumental musical legacy that he [Mr Mingus] has left us with…