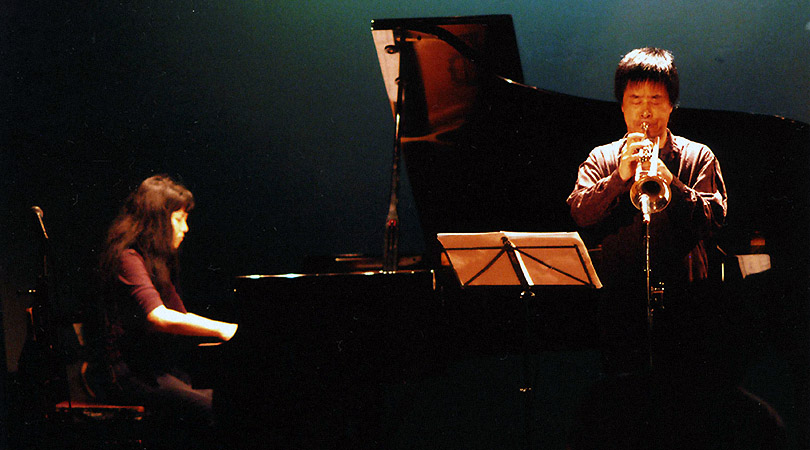 A very long time ago, my father, not known for political correctness, told me how much he admired the Japanese, despite which side of the Second World War they were on. He cited their great skill as water colourists, the concrete of nature of their imagery in Haiku and Tanka. My father was also a died-in-the-wool colonialist who taught me to say “Viva Salazar!” in praise of the erstwhile Portuguese Dictator. But more significantly he an imperialist, believed that most great art—both music and painting—came from dedicated Royal patronage “Look at what Beethoven, Bach and Mozart produced under Kings and Archdukes,” he said perfunctorily, “And as for the Japanese…” he added “they owed everything to God and Emperor…” he added somewhat mystically. It was true that the Japanese were filled with worshipful respect of their Emperor; the throne of Japan was almost a conduit to God, in my father’s mind if you will, although that might not have been entirely true. But most of all he said they were the only nation where everyone bar the Emperor was equal in every respect, had a passion for art, poetry and music, produced impeccably designed and manufactured goods, worked hard and played hard, which meant that they held their Saki well. Above all he announced to nobody in particular that Japan was a nation of perfectionists which had never been conquered throughout history, by “those damn Americans—armistice or not” and did not deserve Robert Oppenheimer’s dangerous toy. And he urged me to love and respect the ancestors without question, the way the Japanese did. 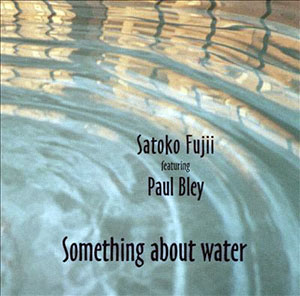 In turn I vowed to remain forthright and absolutely fearless as their samurai, yet to keep pursuing the study of the imagism of their poetry as Ernest Fenollosa and Ezra Pound treatise had done with their study of Noh theatre; to keep an eye out for Seiji Ozawa—a fine conductor of Ludwig van Beethoven and Wolfgang Amadeus Mozart. Later in life I added to this list of much admired musicians the name of Toshiko Akiyoshi, who had come to his attention thanks to a trip to Japan in the 1996s. Then, in April 1997, on my birthday, long before dementia consumed him body and soul in 2001, he bought and presented me with a record—a vinyl no less, entitled Something About Water—by a young pianist, Satoko Fujii (where she stood up to the demanding challenge thrown at her by the mighty pianist Paul Bley); this presentation upon recommendation from his brother in Israel. He waxed eloquently about the cut and thrust of Ms. Fujii’s technique, which prompted him to think of her as wielding two hands as sharp as samurai swords as she played her grand piano as if in praise of the triumph of human endeavour; yet possessing an emotional deportment in her playing as petal-soft as the genteel as the culture and lore of the Chrysanthemum throne… And that is how I first came to hear Ms. Fujii’s challenging music until Ann Braithwaite reawakened the memories of that old record when she sent me Satoko Fujii’s 2009 Tzadik record, Kuroi Kawa—Black River on which Ms. Fujii played piano and accordion, and provided electrifying vocalastics to those provided by her ever-talented doppelgänger in the duo Minamo, Carla Kilstedt, who wailed and bowed her way on violin and trumpet violin. 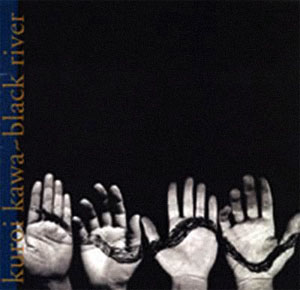 Ms. Fujii’s music is complex and not easy to come to terms with, but I believe that no great music is easy to decode. But when you do; when you reach that inevitable dénouement then its beauty is revealed as if a proverbial flower is opened and inside its petals you will see its life revealed in all its glory. It is like that with the music of Satoko Fujii. Her opening bars of music are usually like a bud tightly shut. You must shut your eyes tight in order to pry open the bulb. However you soon realise that you cannot force that on her. The resistance, however delicate, threatens to destroy the thing of beauty that is unravelling before your eyes. So you must patiently watch as the bud is destroyed and the beautiful chrysanthemum is born. So also is it with Satoko Fujii’s music. Although not always it is largely tightly shut, you must not force the pace, but listen gently allowing the notes and the phrases and the lines that dissolve the bars on the sheets as the music seeps into your soul. I, for one, watch in awe as note after note bursts out of the grand piano; is tossed into the air thick with music. I watch as her fingers crash into the keyboard; or pierce the ebony and ivory like feathers—depending on what the music calls for. I watch as these notes pop into that air and pirouette, their colours changing, the timbre echoing off walls and ceiling. The leap seemingly incapable of falling down; they twist and turn revealing their myriad facets, seemingly interminably, and then and only then they begin to fall down and die. This is a timeless process. Notes never die suddenly. The depressed sustaining pedal allows them to live in the heart and in the inner ear as if they were born to echo there forever. And then the next note is played, and then the next; and then a cluster—a sudden rush of blood to the cheeks; a feeling of being suddenly alive. Lamps are lit bulbs pop and diffuse… flowers are born… clouds dissipate… and the living sun illuminates everything in sight until I am almost blinded by the beauty of what is around me; the notes I not only hear but the narrative that I see unfolding before my eyes… Satoko Fujii is playing a song of joy. 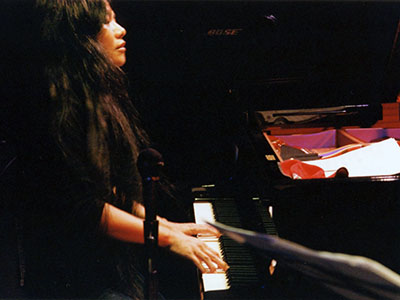 It is wise to prepare yourself before sitting down to listen to Satoko Fujii’s music. Yoga helps. I find that facing the sun in a form that befits worship of The Almighty relaxes the faculties that are required to appreciate any music; more so that of Ms. Fujii. There are several reasons why. My inner ear is required to me especially attentive to the strains of the music. My heartbeat must be steady for it will race every now and then. I must be able to take deep breaths for this is sure to act as a conduit to the soul. My eyes must be shut for that is the best way to follow the music’s narrative as I am taken on a fantastic journey through narrow mountain gorges and through paddies to the roaring sea that feeds them and gives them life. I must keep focus as sometimes I am driven through the streets of and the blinding neon lights of Tokyo or New York or of Milan or London or some other city in Europe. Ms. Fujii is known to traverse a wide and almost intergalactic topography as she pursues the course to the sun in pursuit of the perfect note or phrase. She is more often than not accompanied by her husband, the trumpeter, Natsuki Tamura. Like Ms. Fujii, Mr. Tamura is an astounding player. He seems to occupy a vast landscape of music, prompted, or urged to travel there by the ghosts of John Coltrane and Albert Ayler and his brother Donald Ayler. His Trumpet seems to glorify the solar system in a manner in which few, if any, trumpeters did in this or any age. He sees the sun in all its glory on “Tokyo Rush Hour” a chart he shares with Ms. Fujii whose vision is much the same. 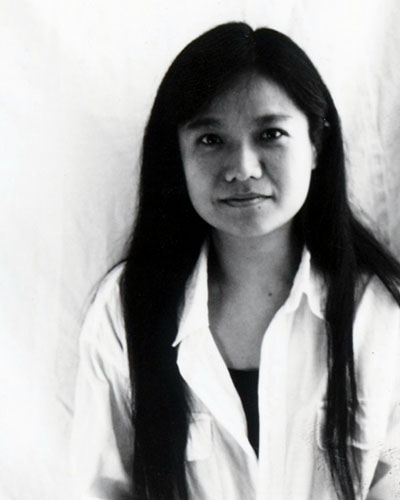 Eyes turned upward they pierce the cityscape encountering shards of glass windows from skyscrapers that are also turned toward the sun. But this squinting of the eyes does not diminish the vision. On the contrary eyes being wide shut, the inner vision is activated and the extra sensory perception talks over. This refracted vision makes for an angular attack on the piano and on the horn. Little is said, but everything that matters is understood. The trumpet pierces through the clouds and the sky en route to the sun. I hear complaints; a trumpet protesting as its sound is bent and vaporised as it nears that searing star. Resolution is a long note echoing on the piano seemingly forever as the trumpet ululates and the thin vibrato stirs up a perfect storm. But I have heard every bit of the blues and in the dying notes I have heard even prophesy for I had breathed deep and relaxed and opened my soul. Thus I was prepared. The tingling in the pit of my stomach is a foretelling of that which is to follow. Nothing can prepare me what is to come next so I shut my eyes and open my vision as I cast my closed lids once again toward the never changing sun again. I breathe deeply as the piano is played by fingers both delicate and brutal. Ms. Fujii hammers the ivory with fists of steel. She is not enraged, but somehow the music is close to being described as so. As suddenly as she attacks and as slanted and angular as that attack is, suddenly the piano dies and the cascade of wild notes is replaced by a couple in the key of C7; the sustaining pedal is depressed hard and a baseline is played. This erudite phrase hangs in the air like the baritone of Paul Robeson. The music assails the senses, but I am prepared. I am in my fourth hour of yoga and the mesmerising ostinato is applied like glue to my soul, which soars and is now singing as Ms. Fujii wants me to.