Home Imperatives Rise Like Lions: The politics of Shelley’s “Mask of Anarchy”

Something has destroyed the anarchic rule – a revolution. Yet this is not the end of the poem. Shelley knew that it is not as simple as that, although courage and defiance and a willingness to risk your own life is necessary if a revolution is to happen. Hope’s action has been repeated down to our own day – but united action and a plan is also necessary. People need to know what they are fighting for and why. Shelley wants to set out why such a revolution is worth fighting for, what the condition of workers is under ‘Anarchy’ and what it could be like. The vivid and dramatic imagery does not continue into the next section. Some words follow which come from no one knows where, but ‘As if their own indignant Earth/which gives the sons of England birth’ (p. 91) had spoken from each drop of blood with which she had been ‘bedewed’. It is clear that this is the blood of the sons of England, whose blood she had ‘felt upon her brow’ and in a later verse she is evidently thinking of Peterloo when she says:

Dew renews and refreshes the grass. The blood that was shed at Peterloo will renew the struggle because of the anger and inspiration it causes. But it should be clear why and what workers are fighting for.

In this second section, Shelley sets out a beautiful and accurate description of what the opposite of freedom is:

“Tis to work and have such pay
As just keeps life from day to day
In your limbs, as in a cell
For the tyrants’ use to dwell.” (p. 92)

Shelley knew the condition of the workers of his own day, and ours, where pay just covers the barest essentials to get by. Hunger, homelessness, rising costs due to financial crises and depressions (as in our own day, post-Waterloo Britain was suffering depression) and the Peterloo Massacre are what freedom is not. In an image familiar to his audience from the Bible he compares the English worker to Christ – ‘All things have a home but one – /Thou, oh Englishman, hast none!’ (p. 93)

Freedom on the other hand ensures enough food, shelter, education, justice, freedom of thought and peace. This is worth fighting for, and a very concrete form of freedom, not just an empty abstract word but grounded in everyday experience of the way the Industrial Revolution had destroyed the lives of working people and how the system was kept in place by GOD AND KING AND LAW, the rhetoric of religion, royalty and the laws made by the ruling class, duty. At this time the ruling class were identifying ‘patriotism’ with these things whereas the working class identified it with a common good. 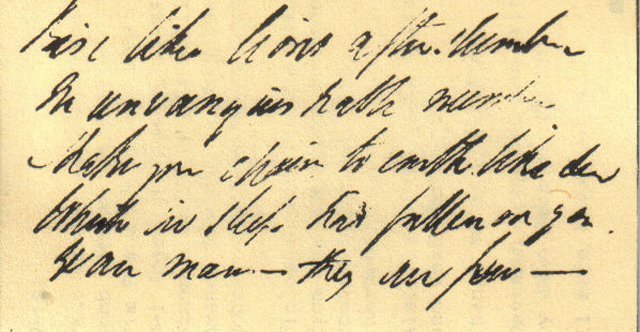 But ‘blood is on the grass like dew’. Shelley suggests another demonstration is necessary, ‘a great assembly’, and another sacrifice. There should be a declaration of freedom from the ruling class ideas. It is to be held on some outdoor place in England and everyone who is sympathetic should attend, from ‘every hut, village and town’, from ‘workhouses and prisons and even some ‘from the palaces’ (those ‘prison houses of wealth and fashion’) p. 96. Then ‘if the tyrants dare’ to attack this demonstration:

“Stand ye calm and resolute…
With folded arms and looks which are
Weapons of unvanquished war.”

The demonstrators are to remain like this while the military attack not just them but also their wives and children. This section is seriously problematic since it is impossible. No one could stand calm and resolute while a child is being slaughtered, and ironically the last person to have done so would have been Shelley. So – did he mean this? 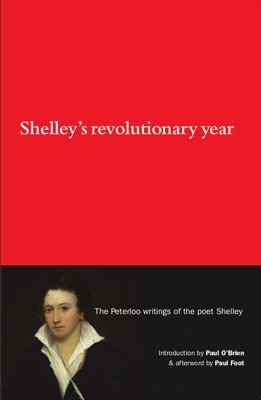 In “A Philosophical View of Reform” Shelley does say that the ‘true patriot’ would ‘exhort’ ‘a more considerable number’ to ‘expect without resistance the onset of the cavalry, with folded arms’. He did think that the attackers would be overawed by this behaviour into holding back. Shelley had learnt politically from the Quakers with whom he campaigned as a young man against the slave trade – meetings, petitions, letters to the press. Quakers believe in non-violence and they had practised facing hostility with calm in Ireland in the 1798 Rising. However, their success may well have owed more to the respect in which they were held than to the tactics themselves. Shelley also probably knew of instances during the French Revolution when soldiers refused to fire on the crowd and believed English soldiers would also refuse. The Manchester Yeomanry, however, was not drawn from the class they were attacking, and they were not sympathetic, as an ordinary soldier might have been. Furthermore, although Shelley admired the ideal of non-violent resistance, there are signs that he was ambivalent about it because he believed that the ruling class will resist violently or, as in his poem “Laon and Cythna”, make a violent counter-revolution. In “A Philosophical View” he frequently puts forward objections to non-violent revolution. Although he believed civil war to be ‘a calamity’, he states that ‘it will be necessary to appeal to an exertion of physical strength’ (p. 83) and that ‘we possess a right of resistance’ (p. 81). And, more vividly, ‘so dear is power that the tyrants themselves neither then, nor now, nor ever, left or leave a path to freedom but through their own blood’ (p. 32).

Just as his ambivalence pervades the prose essay, so it also exists in the Mask, which Shelley presents as a vision. The sections on the demonstration and the resistance to attack are just as visionary as the earlier part. The lines about the gathering of people all opposed to the regime from all over the country to ‘some (unidentified) spot of English ground’ (p. 95) describe an imagined but hardly possible event. All those people would not be able to come together simultaneously, and the ‘spot’ would have to be massive to hold them all. We realise this and when we go on to read or hear about the attack on the demonstration and the resistance we do not take him literally. What is carried away from the poem is the sense that resistance and rising are necessary, whether peaceful or not. The most famous verse beginning ‘Rise like lions after slumber’, is repeated and it ends the poem (pp. 92,99).

The gathering at St Peter’s Field had been peaceful – those who attended were asked to leave their walking sticks at houses along the way to show that they did not intend violence. Ironically, some of those attacked ended by defending themselves with posts and stones they found outside the Quaker Meeting House. And the attackers had been, as Shelley suggests in the poem, universally condemned and shamed. He is commemorating what actually happened, Peterloo itself. The Peterloo Massacre has come down to us in history ‘Eloquent, oracular’, (p. 98) in part because of Shelley’s words.

The phrase ‘Ye are many – they are few’, was one which Henry Hunt used in his speeches. This may appear an impudent borrowing, but Shelley himself used the phrase in his earlier poem, Queen Mab, and it is possible that Henry Hunt knew Queen Mab. By repeating it in the Mask, Shelley emphasised its importance in the movement for reform which Hunt led. Despite massive protests by the working class and partly because of the confused response of Hunt and others, the Reform movement collapsed in the years following Peterloo, although it was to revive in the late 1820s.

Nowadays, Hunt himself is largely forgotten but in Shelley’s poem the words have continued to inspire generations of activists – and at least one activist poet, William Alderson, whose highly praised poem, “May Days”, was intended as a modern equivalent to The Mask of Anarchy, and was published by Counterfire in 2017.