Anyone who has been in an audience – especially right up front – in the early days of the Pat Metheny Group [I was there in Hamburg, in 1985, if my memory serves me correctly] would have been mesmerised by the figure of Lyle Mays, his wiry frame, arched over his keyboard, surrounded and lost amid a great bank of electronic keyboards; lost in the swirling atmospheric soundworld he created with the guitarist; one that was to become a signature sonic universe of the group ever since. What was so hypnotic about the late pianist was not simply his sound; it was also somehow that he had hands simply made almost exclusively for the piano, with ling, slender fingers that lay flat [or were curved] over the keys, which he seemed not to play so much as to caress, or strike glancing blows as if in a blur of feathery movements as his arms swept across the keyboards, jumping from one instrument to another, his body and shock of frizzy blond hair swishing as his body swiveled to play another keyboard at his side. I’ll never forget how little space there was in that club in Hamburg, and yet how enormous Mr Mays seemed as he soloed song, after song.

No musician except, perhaps, his older contemporary, Ralph Towner made such magnificent use of the myriad of electronic keyboards at his disposal like Lyle Mays. Absolutely no one. Period. Others extracted sounds out of the electronic instruments. Mr Mays made music out of them and it was his unique understanding of what digitized sound could do – his unique genius – that enabled him to create a soundworld so unique that it has never been replicated… and now, with him gone, never will. His frail frame towered over the instrument I the same way that Keith Emerson’s did over the massive seminal instrument designed for him by Robert Moog. But Mr Mays’ music is elementally different from Mr Emerson’s. While the English pianist evoked the great European tradition of Handel’s Coronation Anthems with the force of William Blake’s fiery vision, Mr Mays’ music echoed the endless sweep of the poetry of Whitmanesque vistas that became pressed into the imagination even when they were not there.

This ghostly, panoramic vision of Lyle Mays has been poured into what appears to be the last work he created. Eberhard is a magnificent homage to the iconic German bassist Eberhard Weber, who – like Mr Mays did for Pat Metheny – shaped the sound universe of tenor and soprano saxophonist Jan Garbarek, in the early days of the great Norwegian’s pioneering music. 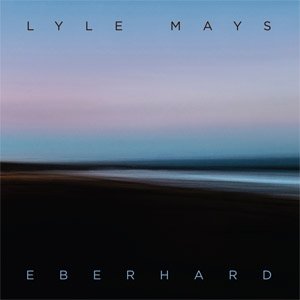 The thirteen-minute opus is unwrapped by Mr Mays, as a collector would a piece of expensive crystal, pealing way its musical wrapping to reveal – at first with just the dark notes of Steve Rodby’s contrabass – the shimmering gem of a piece. The work is conceived of and executed on an enormous musical canvas.

It is a single-movement piece for piano, synthesizers and orchestra, “something between a symphony, a concerto and a large sonata”. Its unusual score features [uniquely] four celli and a contrabass which together with Mr Mays’ exquisite pianism and manipulation of the electronic keyboards, enables him to extract the evocative motifs that spin off from an emotive theme, developed with the entry of the woodwinds, the glassy mallet percussion, and the percussion colours of two other [drummers and] percussionists. The grandiosity of the work reaches its apogee with Mitchel Forman’s great wheezing Hammond B3 organ, built up, of course, after the shimmering phrases played on the Wurlitzer electric piano – all of this momentum is uncorked by the kinetic energy of Mr May’s glorious piano and synthesizers and is crowned by Aubrey Johnson’s splendid wordless vocalastics, conjoined in chorus with the voices of Rosana and Gary Eckert. The work spins and pirouettes with balletic grace, in a great elliptical arc as the profile of Eberhard Weber emerges at the end of it all, as if a chrysalis has been morphed into a butterfly.

Most significantly – despite all the electronics, and post-production lavished upon this work, I might add, by Mr Rodby and the masterful Rich Breen, this work remains one of the most sensitive pieces of music – a work performed tenderly, albeit with hair-raising virtuosity; a supremely eloquent concerto [if you will], that places unique emphasis on the relationship between soloist and orchestra, exemplified by the fine rapport Mr Mays displays with his fellow musicians, as between them they develop a sense of line that sounds as natural as breathing. It is reminder of what we will continue to miss enormously – none more, I feel sure, than Mr Metheny, Mr Rodby, his family espeecially his niece Aubrey Johnson, with the passing of this singular artist: Lyle Mays.