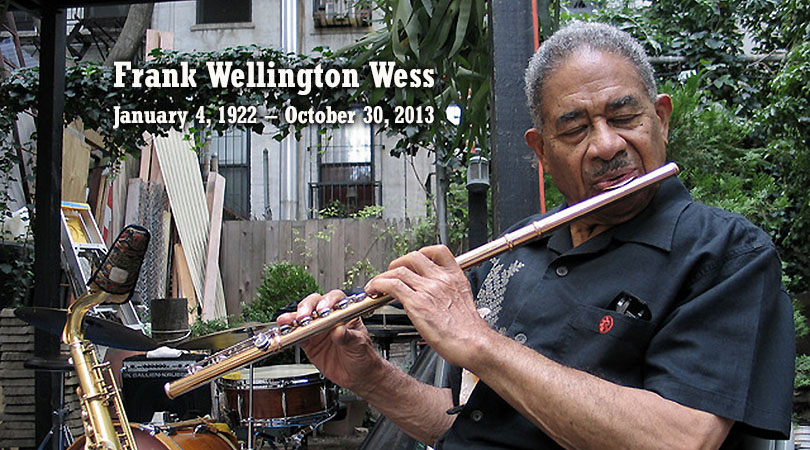 I recently reviewed a record by the great tenor saxophonist and flutist, Frank Wess. I never knew that when I was reviewing Magic 101 it was going to be his last. I even said that I felt he was getting stronger. I suppose I wanted him to be immortal. I am a child like that. When I love someone’s music he is not supposed to die. And on Magic 101 Frank Wess played like that; with so much emotion and fervour I felt he was going to be eternal.

Frank Wess had been playing with that determined softness for years. He played moist and sinewy right through his years with Billy Eckstine and Count Basie; with Clark Terry and with Sir Roland Hanna. In 1968 Mr. Wess made a memorable album, The Jazz Composer’s Orchestra. Then something happened and his reputation swelled to magical proportions. Everyone wanted to work with Mr. Wess. The warmth of his monumental tenor and his lissome, supple flute was something—a sound—that everyone who was anyone in music wanted to have in concert and on record. Kenny Barron, Rufus Ried, Buck Clayton, Benny Carter, Dr. Billy Taylor, Harry “Sweets” Edison, Mel Torme, the delightful Ernestine Anderson, Louie Bellson, John Pizzarelli, Howard Alden, the irrepressible Dick Hyman, Jane Jarvis, Milt Jackson and Frank Vignola, to name but a few. And then there was the Toshiko Akiyoshi Jazz Orchestra where Mr. Wess’ big horn was a feature of that memorable ensemble. Frank Wess made two outstanding records with the legendary Hank Jones. Hank and Frank was released in 2002 and that was followed up by Hank and Frank II in 2009. It seemed, when listening to the records, that two mythical titans had been brought together by Zeus to please not only the gods of Valhalla, but millions on earth as well.

Then Mr. Wess made what I consider to be his finest record. Magic 101 seemed to be the proverbial height of his career. Here he seemed to give it his all. Did he sense that the end was near? Probably not, but when human beings have a sense of mortality they seem to give their best albeit with a sense of vulnerability. This is what makes great men great. I would like to remember Frank Wess as I knew him from his great swansong. And so I quote what I wrote about it in full:

“Frank Wess is not simply one of the finest flutists around; he is also a tenor saxophonist and one with the magnificence of Ben Webster and Coleman Hawkins. His tone is hearty and broad; he plays with deep and soulful emotion, often accenting the end of the odd line with an almost imperceptible vibrato. His annunciation is radiant and so expressive that he can suggest a clear day, or a cloudy one depending on the mood and the narrative of the songs that he plays. He stands rather still when he plays, eyes shut for the length of the choruses, but he blows these with so much swagger that it is possible to imagine a delightful dance that the characters he inhabits might indulge in. Mr. Wess is also an old soul; which is to say that he might blow two—perhaps three—choruses in each song. His improvised melodies are beautifully elliptical and swerve through the air like graceful dancers swirling around and around; his harmonies become unexpected steps they might take as if prompted by the gleaming wax on the soles of their shoes. Together, melody and harmony always caress each other; the one seeming to regard the other with that sly secret glance, speaking volumes through the tenor saxophonist’s brilliant repertoire.

“On Magic 101 with brevity as is his brief, Frank Wess waxes eloquent within the spare architecture of the songs, building like a beautiful of each before handing them off to his worthy constituents: the absolutely marvelous pianist Kenny Barron, who matches the master saxophonist note for note as he constructs whorls of music laden with exciting figurines presented as gravity-defying counterpoint; the bassist Kenny Davis who is at once master of rhythm and of harmony; who looks upon each song with the eyes wide with amazement, gently massaging and moulding the melody of each until it is brought to fruition. Finally there is Winard Harper—drummer extraordinaire—who is the master of shadows and light; a colourist so deft with sticks and brushes that he might as well be painting in polyrhythms with every deft stroke of his hand-held implements. Who needs more when just these players suffice to make music as if it were broadcast by a chorus of heavenly hosts, led by Frank Wess, but followed very closely by Kenny Barron, Kenny Davis and Winard Harper?

“Each of the songs are classics re-visited afresh with the burnished glow of Frank Wess’ saxophone voice; the delicate caress of Mr. Barron’s fingers as well as those of Mr. Davis; and finally Winard Harper—who participates so fully in each song that he is inexorably bethroated to Mr. Wess’ saxophone and they play each song as would artists with brushes. The drummer appears to first etch the melody on his drums with light and shade as he and Mr. Wess trace the outline of the song/picture; then Mr. Davis and Mr. Wess will fill in the details with polyphonic harmony and poly rhythms respectively, making patterns of immense beauty. Songs that lend themselves to this lovers’ caress are invariably classically inclined—as are “The Very Thought of You,” “Easy Living” and “All Too Soon”. This does not exclude the other repertoire from such gentle touches that make them sound like fine art. But there are other characters in the dramatis personae. Kenny Barron is a key figure in the magical potion conjured up by Frank Wess. If Mr. Wess plays the medieval apothecary, then Mr. Barron plays the dancing shaman willing the music to become the body of a beautiful woman. The spells he casts on the music of “Say It Isn’t So,” “Easy Living” and “Blue Monk” are devastatingly beautiful.

“Magic 101 is one of those records that might prove the quirky hypothesis that old melodists never die; not only that, like Frank Wess, they do not fade away, but mature like rare and expensive wine that lingers long after the proverbial inebriation wears thin.”