Home Books Verna Gillis: I Just Want to Be Invited I Promise Not to... 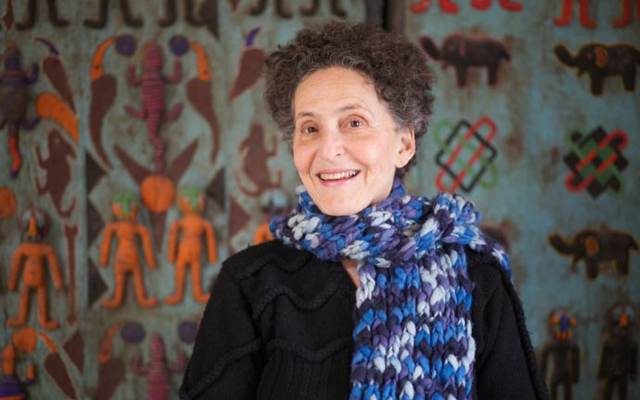 While the world was not paying too much attention – looking the other way, so to speak – Verna Gillis came into her own as a writer with a serious claim to being a poet as well and a very funny comedienne as well. Miss Gillis is, of course, one of the world’s most celebrated ethnomusicologists, who had produced and released 27 LPs and cds on the Smithsonian Folkways and Lyrichord labels featuring music based on field work she did in Haiti, the Dominican Republic, Peru, Surinam, Ghana, Afghanistan, Iran and Kashmir. In addition she is a pioneering “world music” producer who helped develop the careers of iconic artists Youssou Ndour, Carlinhos Brown, Salif Keita, Yomo Toro. And she has also produced the magical music of Roswell Rudd’s late work.

But lately we have come to meet Miss Gillis in her comedic incarnation. In fact, although her stand-up act has not been featured in comedy clubs as frequently as some of the so-called BIG names have, she is worthy of having her name light up the most famous marques anywhere in the world. Her comedy rap is accomplished and even, as is now common parlance in the comedy world, “Badass”. But her wonderful intellect 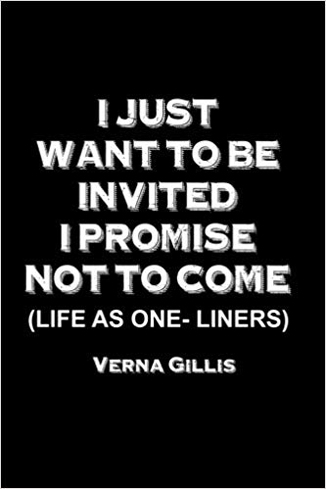 makes her singular style a kind of Groucho Marx meets Richard Pryor Sometimes this takes the form of a short story and at other times she simply delivers devilishly funny one-liners which like proverbial scorpions pack a sting in the tail.

It is this latter form of Miss Gillis’ comedy that fills this slim book with a title that is longer – and equally funny as the one-liners contained within, and that title is I Just Want to Be Invited. I Promise Not to Come (Life as One-Liners). The book, her second, was published in 2012 but is worth remembering – and buying, if you have’t bought one yet. Although Miss Gillis must certainly have been born with a comedic streak in her, the slightly dark humour that informs her work developed later in life, its twists developing greater bite as she grew older and more poignantly when her partner of seventeen years, the great Roswell Rudd was diagnosed with prostate cancer. (Mr Rudd’s spirit ascended and took its place in the realm of the great ancestors, but he continues to live is vividly as ever in the earthly realm for many who know and love him).

Miss Gillis may have crafted the immortal line “Death is a life-changing experience” after Mr Rudd and she were separated in the body, so to speak. That line is not in the book under review, but there are scores of others one funnier than the next I this book. Miss Gillis’ humour is both cerebral and hilariously ribald. She pulls no punches here. Not far into the book, though, she invites us into her life as she knows it. “Welcome to the highlights of my low points,” she says. And then she begins to regale us with the most deliciously beautiful and funny one-liners, some of which hit so close to home that we flinch and laugh at the same time.

“Where did my libido go?” she asks on one page, as she takes on not just the state of her sexuality, but many of ours as well. We can also take comfort in the relevance of her humour even as we hide a blush alone in a room as we read, “Free to Pee, You and Me” (describing adults pads), or “If I’m thinking about peeing it’s already too late!” All this before she drops some fetid depth bombs such as “Shit is fertilizer” and “I was a bed-wetter. Grateful I wasn’t a bed-shitter!” and then hits so hard at her own funny-bone that we almost feel or own “pee” coming on: “What happened to the burning bush between my legs? The bald eagle has landed”.

It’s an all-too-slim book and it’s over quite quickly – much too quickly. Fortunately, though we can keep the book close at hand and re-read its lines/pages over and over again. It’s hard to put the book down once you start, but like all great humour its lines bears remembering and repeating. In fact it’s the next-best thing to listening to Miss Gillis deliver the lines herself. Thankfully, she’s also so full of it that we can take her word for it even when she delivers a proverbial slap to the face as she warns, “It hasn’t been nearly long enough since I last saw you.” Which is when it’s time to turn the other cheek and hope she’ll be back to deliver much more of what she’s just done in this memorable book that’s (still) available in two editions – with and without illustrations.