Home Books Lilian Terry: On and Off the Record with Dizzy, Duke, Brother Ray...
Dizzy, Duke, Brother Ray and Friends: by Lilian Terry
It is very hard, indeed, to find another style of music as so widely influential, accepted, adapted and often blatantly copied than Jazz. It is a young music – only breaking in a series of waves starting at the turn of the 19th century, then in one fell swoop from the late 1940’s, consuming the world in the tsunami of bebop, a rhythmic, melodic and harmonic invention of Charlie Parker, with Dizzy Gillespie, Kenny “Klook” Clarke, Thelonious Monk, and a small group of others, that continues to wash over music across styles including – and probably principally hip-hop, its name notwithstanding.

Jazz is often referred to as the classical music of this era. While that is open to debate, it certainly is the most important progression in musical style, something even classical musicians and instrumentalists from Sergei Rachmaninoff to Maurice Ravel, Igor Stravinsky, Karlheinz Stockhausen, and Vladimir Horowitz to Yehudi Menuhin and beyond have been influenced by in various degrees of intensity. Truth to tell, though, improvisation – the bedrock of Jazz – has always been a part of classical music where it is referred to as the called the cadenza. Thus it might be safe to assume that Jazz is part of the continuum of music, attributable to the inventions that arose out of the Blues, the voice of Africa-American diaspora, to be correct, yet safe to assume also a part of the continuum of humanity, which began, at any rate in Africa.

Sadly, though, historic documentation is relatively thin compared to the historic records of other styles in the musical history. But the history is Jazz is rich in anecdotal records and when one such by the broadcast journalist and singer Lilian Terry comes out in the form of a book it is reason to celebrate. 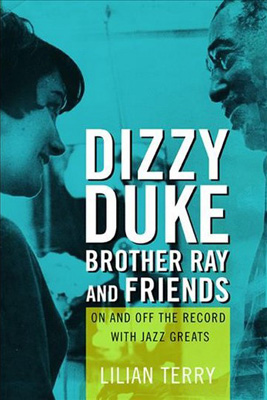 But there is greater reason to praise Dizzy, Duke, Brother Ray and Friends (On and Off the Record with Jazz Greats). It is a beautifully written and often a thought-provoking narrative all achieved in a relatively short space of just 208 pages. This is a rare achievement by any standard.

Drawing on deep-diving interviews that Miss Terry conducted for radio and television, and sometimes informal conversations during breakfasts, lunches and dinners with her subjects. The list is admittedly short: Duke Ellington, Max Roach and Abbey Lincoln, Horace Silver, Ray Charles, Bill Evans and in the largest section of the book Dizzy Gillespie, with whom Miss Terry enjoyed a long and very close relationship. However, given her long and distinguished career in journalism and the fact that she is also a singer who is deeply respected in the realm of Jazz, there much more for Miss Terry to tell us about.

In its current form, however, Dizzy, Duke, Brother Ray and Friends offers an interesting insight into Miss Terry’s own involvement with Jazz for which she has an enormous passion. The book also lets readers follow the development of European Jazz audiences,

especially those whose knowledge may have grown enormously from absorbing Miss Terry’s insightful interviews with the musicians in question. All of those interviews have been conducted with the greatest of skill and with Miss Terry’s gentle hand, guiding her subjects into territories that could not have been easy for them to talk about.

Ray Charles talks about his drug addiction candidly offering sage advice to readers about the perils of addiction. But it is the almost whispered manner in which Miss Terry broached the subject that is extraordinary and her ability to reveal not only the facts as they were revealed but also the inner machinations of how great journalism discloses that which might remain otherwise hidden. This, Miss Terry does by flipping her script between her own soliloquies to her gentle questing style.