Home Music Wes Montgomery In Paris: The Definitive ORTF Recording
There is no such thing as ‘the definitive’ Wes Montgomery recording. Each of his recordings is definitive in their own way because, remarkably, every time Wes Montgomery plays he seems to unearth new aspects of the instrument that he played. Sometimes, tonal colours were the kind never experiences before; other times it would be timbre; again, other times it was the manner in which he improvised soli based on an innocuous set of triads, seemingly inventing a whole new approach to each set. Every Wes Montgomery record seems to come laden with a bagful of surprises. Recently, however, there is the fact that some of his rarest – and finest – work has been unearthed by audiophile sleuth extraordinaire Zev Feldman, backed by the redoubtable Resonance Records (who else) the most recent of which is the album In Paris: The Definitive ORTF Recordings, probably also the best recording (in addition to the Jaco Pastorius recording Truth, Liberty and Soul (Live in NYC The Complete 1982 NPR Jazz Alive Recording).

There is nothing quite like either of the recordings in terms of content (repertoire, booklet, etc.) and production values (engineering, mastering, etc.). There’s a certain irony in the former as far as this Wes Montgomery recording is concerned. Many Jazz musicians from Louis Armstrong, Sidney Bechet and Duke Ellington to Charles Mingus, Bud Powell Anthony Braxton and the musicians in the AACM constellation and scores of other Jazz – and by that I mean Black musicians played some of their finest music before European – particularly French – audiences probably because unlike in the France of today racism was hardly a factor among white audiences, whereas in the US, home of Jazz, a Black had to be in a dive (Slugs comes to mind) or a jook joint (name any one) to be really appreciated. There are, of course exceptions (in the US) and some of Mr Mingus’ greatest work seems to testify to that fact. But France plays an important part in the history of Jazz for more reasons than one.

Hugues Panassié and Charles Delauney are two of the other reasons; Boris Vian is another and that means appreciation of the music without preconceptions like other white American critics. The Office de Radiodiffusion Télévision Française – ORTF for short is yet another and this where the master tapes of this recording come from just as a recent Resonance Records’ Larry Young In Paris The ORTF Recordings (HCD 2022) did. So add the names of Pascal Rozat, Jack Diéval, and André Francis to those of the French writers and archivists mentioned earlier. It was ultimately men like those and organisations like ORTF that facilitated performances such as these. 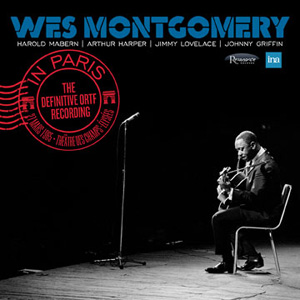 Of course if you argued that Wes Montgomery was just being the genius he was you would also be correct. The guitarist is, after all, quite literally magnificent from beginning to end. However, the pace of the songs on the album doesn’t mean that it ends all too quickly either.

On the contrary, Wes Montgomery seems to take his own time to develop themes and flesh out ideas by allowing them to unfold miraculously in melody after melody and solo after solo. The word ‘wizard’ comes to mind immediately as Wes Montgomery is constantly pulling some magical trick from out of his armoury. Sometimes his lines appear like sharp gashes made by a powerful sorcerer wielding a sharp knife drawing melodic lines with short stabbing gestures. At other times his right hand carves the air in and around his six strings, fingers like those of a samurai swishing his invisible blade in long, balletic curves. His left hand flies across the fret-board, fingers barely seeming to brush the strings as he ‘calls out’ now a chord, now a triad, now an elongated improvisation, always mixing them up and always inventing something new as he beckons the other individuals in the ensemble to follow where he is going. And none of them will be left behind.

This has to be one of the most copacetic groups that Wes Montgomery has every played with. Harold Mabern is superb; the epitome of a soul-mate in the same way that Dizzy was to Bird, or Charlie Rouse was to Thelonious Monk, or Dannie Richmond was to Charles Mingus. Mr Mabern is as inventive as Wes Montgomery pushing the guitarist to go further while developing improvised ideas for melodies, then venturing further into the proverbial unknown himself. His elegant craftsmanship, resonant tone, often redolent of indigo blues is one of the reasons for the magnificence of this set of discs. Never far behind – in fact in the advance guard itself – are bassist Arthur Harper and the drummer Jimmy Lovelace. Mr Harper’s round, voluptuous notes come from the depth of the bass and echo with a gravitas that suggests a rare musical wisdom. Jimmy Lovelace is more, than a mere timekeeper, an elegant melodist too.

Johnny Griffin’s big, smoky tenor saxophone adorns three charts (four songs if you count the medley). His warmth and broad whispering vibrato sometimes recalls Ben Webster, but never long enough to suggest that he (Mr Griffin) is a sycophantic follower. Mr Griffin adds glamour to the music and enriches it enormously. The playing of every one of the musicians on “’Round Midnight” is breathtaking with Wes Montgomery, Harold Mabern, Johnny Griffin, Arthur Harper and Jimmy Lovelace playing well outside each of their comfort-zones. Of course Mr Montgo0mery is especially magnificent in the big solo cadenza at the end of the song. But then you could say the same of his performance on each of the songs. Every piece is played with a kind of languid ease, each melodic variation following the other, his sumptuous tone brilliantly caught in this live recording, now reissued by one of the most iconic labels in Jazz: Resonance Records.