The guitar – that diabolically stubborn instrument – can come alive with noble splendour in the hands of someone who has mastered the instrument; someone who, with soft finger-tips and softer touch, can make each string to sing with but a caress. Wolfgang Muthspiel has that rare ability and he shows it off on Angular Blues, a recording he shares with two other masters in their own respective instrumental realms. Scott Colley, a bassist who plays with the kind of gravitas that few musicians can claim to have and Brain Blade, a drummer and sensual percussion colourist, capable of making drum-skins chant and cymbals shiver with delight. 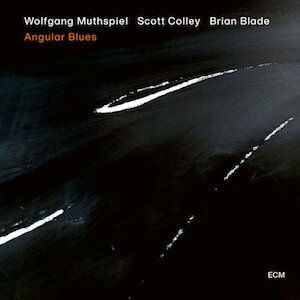 Such is the warmth of the music here that you would almost forget that digital realm which is inhabited to produce it. Mr Muthspiel is clearly a musician who gives a fresh and much-needed lease on life to his instrument. His music – especially with this ensemble – comes from a quiet, dreamy place and it sings with the voice of a bard mixing song and silence in an alchemical manner. Melodic lines are kissed and caressed by Mr Muthspiel in such quietude that bass and drums seem almost intrusive. Of course they aren’t, because their participation in this music is eloquently mannered and provides the perfect atmospheric setting for each song.

Mr Muthspiel explores all of the intricate possibilities and limitations of four fingers, six strings and 19 frets. The easy-looking music is actually often impossible to play (“Kanon in 6/8” and Solo Kanon in 5/4”) are perfect examples. His guitar seems to have an enormous vocabulary of sounds and effects here and each is deployed with astounding

results. Moreover, with the collaboration of Mr Colley and Mr Blade, the music sounds much bigger and more wonderful. “Angular Blues” is lyrical and bittersweet. The melody of “I’ll Remember April” is not so much played as it is embraced by guitar, bass and drums. Mr Muthspiel deploys his vast resources – a range of harmonics, pizzicato and often technique exotica gentle ‘nail sizzle’ and bi-tone tapping’, which, when combined with overlaid digital delay begin to expand his musical soundworld enormously.

This is clearly the music that is individual, inspired, original and daring. With it these musicians enrich the library of recorded music with repertoire that is highly imaginative performed with distinctive style and ornamentation by musicians who are both inspired and inspirational. The adventurous impressionism of Mr Muthspiel, Mr Colley and Mr Blade will delight with each new listening of the music of Angular Blues