There is a refreshing spontaneity and an edgy poetic freshness about all of this music on Standard Deviation – arranged and conducted by Wayne Alpern. The slightly tongue-in-cheek title suggests that Mr Alpern may have “deviated” from his norm or the norm and by this we are to assume that he has, what might be described as a musical norm. But there is no such thing when it comes to Mr Alpern and his musicianship. 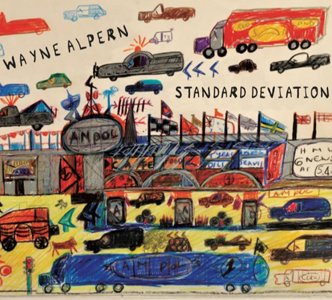 Wayne Alpern’s music is informed by such a wide array of sources, historical periods and musical styles and events that he may be said to have a sort of musical polygynous relationship with the art. However, unlike many curious artists who might fall under the spell of many styles at once, Mr Alpern is able to channel everything that affects his music into a kind of single motivic language – strange and sometimes idiosyncratically tipsy, no doubt – but still fairly intense and quite exquisite as well. To say that it is a kind of Don Quixote meets Milton Feldman in New Orleans and Motown would suggest that it is over the top and overkill, which it certainly isn’t.

Key stylistic movements in music seem to collide in Mr Alpern’s music. But the collision is unique and far from scrapyard exotica. He turns each piece into a unusually attractive miniature. On Standard Deviation the feel of brass is overwhelming. It is not the kind of Second Line brass, but it often feels as if he has been inspired by the raucous intensity of that kind of experience. This is true of the wild pseudo-screaming with which he and the ensemble announce themselves on “Thriller” and how he unlicks the intimacy of “Ode to Billie Joe”. In fact, the “ode” of the latter almost never happens and it’s only because Mr Alpern somehow manages to capture the bittersweet mood of the song that you know he was right about his feeling for the music all along.

There can be no doubt that Mr Alpern knows exactly what he is trying to achieve and that is to shake up your comfort-zone. Everything sounds wonderfully alive about this music. It is bold and brassy, and when the violin plunges into the mix it becomes anxious and mahogany-mellow. But it never loses its dynamism and momentum. Like Mr Alpern and his arrangements, the musicians too breathe life, light and shade, and enormous personality into this music. All round a disc that is a fascinating and rewarding musical experience.