If the phrase “expect the unexpected” were used to describe the work of most artists, it would – in all likelihood – sound terribly hackneyed. Not so in a suggestion of how the music of Wayne Alpern might affect the listener. The reason is so simple and here it is: Mr Alpern has an uncanny penchant for creating – and recreating – musical expression that is so singular that each of his creations becomes a piece in a palimpsest that is all his own. 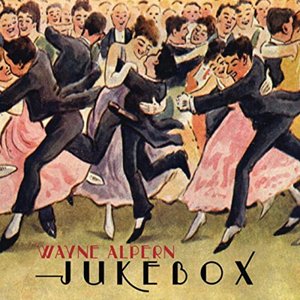 So, how then, ought his music to be described in a sentence? How about an old soul and a superannuated modernist in one body, and mind, whose natural musical gifts are set free like fluttering doves every time he puts the proverbial pen to paper? The “every time” might be a risqué suggestion, but then each time he has released a disc – certainly in the last several years – he has delivered on an unspoken promise of novelty, ingenuity and memorability. The example in question is the album – Jukebox – which contains repertoire numbering 20 songs that belies its name as a “coin=-operated machine that automatically plays selected records or compact discs” for here we have not only the reimaged arrangements of a brilliant musical mind, but the[ir] delivery in a rather unusual combination of voices: reeds, double-reeds and brass, which spring to life from their quietude as a quintet.

The repertoire is made up of seductive arrangements of and standard songs, show tunes and recreated musical forms playfully disguised as celebrated classical musicians – Béla Bartók, Alexander Borodin and Georg Friedrich Händel. All of the music passes through Mr Alpern’s prismatic musical lens which he wields in such a manner that it produces tones and shades that turn dark and light as in “Beauty and the Beast” and “In a Sentimental Mood”, verdant and rust-hued as in “Bartok Chorale” and “Send in the Clowns”; gleamingly metallic “Handel Allegro” and often elegantly matt-finished in “Borodin Over Broadway” or “Have You Seen Miss Jones”.

But the romance of classicism, stage and film is not the only thing on display here. There is also music that swings – Charlie Parker’s iconic bebop piece “Ornithology” is one such example as is the unforgettable Beatles song “Penny Lane”, which jumps for joy, while svelte elegance of “Wonderful Guy” offers us a living display of Mr Alpern’s sensibility for how to make the black dots of music dance their way gracefully off the paper on which they are written. The aforementioned titles have been pulled out of a proverbial hat – this kind of dappled and glimmering effect is heard throughout. It has everything to do with Mr Alpern’s consummate skill as a writer[which is synonymous with arranger, really].

The memorability of this recording also has much to do with the manner in which the members of this ensemble connect with each other as they parley with the familiarity of old friends in a noble conservatoire, as they unfold the gem-like riches of music with uncommon eloquence.