When Elvis Presley died in August 1977, his passing spawned an industry of impressionists who strove for the rest of their lives to look like and sing just like him – in his kind of voice; which later on in their own lives became an oddly near-ludicrous kind of mimicry. Had there been anyone as gifted as Louis Armstrong to do likewise the same fawning kind of adulation would have – in all likelihood – also followed in the wake of Pops’ death. Fortunately for us all that did not happen. However, while honouring Louis “Satchmo” Armstrong has never been an industry for John Redmon, it is certainly something he does with the utmost reverence, love and uncommon elegance. Best of all, it is far away from the kind of fawning mimicry that Elvis’ imitators do, for Mr Redmon is not – nor will he ever be – an imitator. 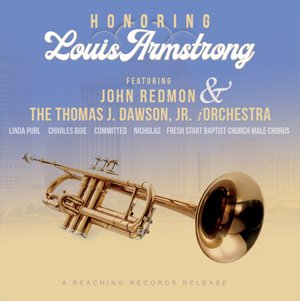 In fact, John Redmon is an authentic artist, born into music and bred in the proverbial fervour of the full-gospel church. And what he does with this eloquent homage to Satchmo is nothing short of unique as he melds that spiritual background into the secularity of Mr Armstrong’s music with uncommon power and elegance. There is no mistaking the memorable raspy growl with which Satchmo often curled into the end of his phrases, but what Mr Redmon also does in his musical homage is to soften the rasp by leaning into the ends of his phrases with whispered eloquence. It is also worth mentioning that Mr Redmon covers the period of music made after that which Mr Armstrong’s bluesy creations made with his legendary Hot Five and Hot Seven dates. This music reminds us of the days when Pops was experiencing his renaissance – after he was discovered by a new generation of listeners, who made him a virtual demi-god. Mr Redmon is also joined in this endeavour by a stellar cast of musicians who include Linda Purl, the late Charles Buie, Phil & Brenda Nicholas, members of Committed – a vocal group from the legendary Oakwood University that produced the group Take 6 – and the Fresh Start Baptist Church Male Chorus.

Mr Redmon has a dark velvet voice laced with a silky smokiness that enables him to turn these popular songs into balladic anthems. He is fortunate to have the prodigious pianist Thomas Dawson Jr. who provides a luscious backdrop for these songs. The arrangements are superb, each with the evocative luxuriant atmospherics. But the echo of the Pops’ legend is reverently unmistakable. The tone is set from the opening “Overture” and the carries on from song to song through to “What a Wonderful World”, a song that is forever associated with Satchmo-folklore. A measure of Mr Redmon’s singular uniqueness as an artist is, nevertheless, unmistakable. You will know this not only from the gospel content on this album – notably “Blessed Assurance” and “Just a Closer Walk with Thee” and “Precious Lord”, but also from the iconic ballad set to the traditional Irish melody of “Londonderry Air”. Finally in a successful attempt to anchor this project both in the here-and-now and the eternal, Mr Redmon sculpts the long inventions of John Lennon’s utopian anthem “Imagine” into a climactic and fitting end to this memorable album.