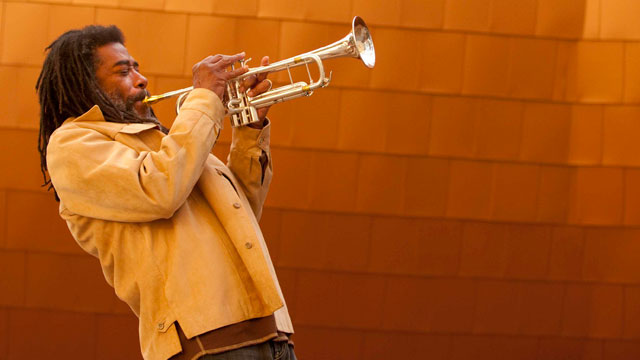 In the epic narratives and in the gorgeous elegies of Wadada Leo Smith lies a heart immersed in the spirituality of the blues. This is not in the relatively modern Anno Domini sense, but his music drinks from an ancient well that predates organized worship and actually resides in one that celebrates the Creator in his awesome glory. This is why Smith is able to make his horn not merely an extension of his lips and tongue, but his heart and soul. His lips and tongue and hence his unique voice is all extensions of these organs that form the temple of his worshipful self. Smith’s voice is truly special indeed. It is neither shrill nor gruff, although these form the extremities of his extraordinary range. However, he plays melodies in short pith lines punctuated by glittering, bronzy hallelujahs and a gravely uttered amen. These lines are like ancient doxologies and reverent refrains played as if he were in conversation with a higher power with who he is pleading the case for the union of an earthly soul.

One of these is “Sarah Bell Wallace.” The real-life character is Smith’s mother, whose radiant personality loomed larger-than-life in the community of her hometown in the Mississippi delta. Smith celebrates her in a long, elegiac chart on his album Dark Lady of the Sonnets. Remarkably, Smith detaches himself from the maternal relationship she had with him and casts her in the context of the community she served. Employing a declarative style, almost like a town-crier, Smith carves a sonic statue of Ms. Wallace. He finishes off characteristics in short, sharp flourishes that appear to be more than merely decorative embellishments. Sarah Bell Wallace is one of two central characters on this wonderful album. The other is “The Dark Lady of the Sonnets” who is actually Billie Holiday (not the lover of Elizabethan poet and playwright, William Shakespeare), but the character in an elegiac poem by the legendary African-American poet, Amiri Baraka. This chart forms the spine of the album. It is a superbly crafted song, and is embroidered with the voice of Chinese vocalist and pipa player, Min Xiao-Fen and the percussion colorist, Pheeroan akLaff. Baraka’s elegiac magnum opus is turned into an extraordinary journey into the life of the great vocalist with akLaff playing a key role in describing her, with his powerful drumming and Smith’s reverent trumpet and flugelhorn.

The other key feature of this album is “Mbira,” which forms music for a ballet and is played in the style of a spiritual form of instrumental music from the Shona peoples of Zimbabwe. The choice of this chart and the music for the ballet is inextricably linked to the drinking of water from the ancient well. Smith ties this all in with glorious lines that shoot out of the bell of his horn. Significantly the Shona people are at the heart of human civilization living near the Great Rift Valley and all of this makes this a rather special theme for a significant album by Wadada Leo Smith.