It is not such a stretch to think of a country as small as Sweden as being one of the greatest repositories of music, not only in Europe, but perhaps in the world too. So to ignore what that country has given birth to as well as curated would be a travesty. Take Jazz, for instance. The specific musical language of the African-American has thrived in Stockholm and elsewhere in upper and lower Sweden long before its icons such as Don Cherry moved there and put a unique stamp on the Jazz coming out of that country. And one label – Caprice Records – has been keeping track of the unfolding history, doing yeoman work with its releases along the way. 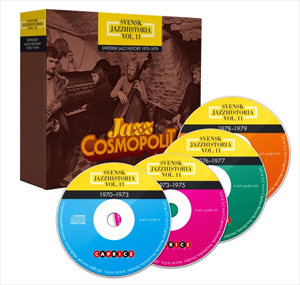 This one under review – Svenska Jazzhistoria Vol. 11 Swedish Jazz History 1970-1979 Jazz Cosmopolit – is a splendid case in point. Take note here: this is Vol. 11 (no less) in the series that goes back to preserving the music of Theodor Pinet , (August 17, 1875 – April 22, 1968), one of the pioneering big band leaders whose music adorns the vinyls of Svenska Jazzhistoria Vol. 1, in addition to seminal charts from the musical Jazzgossen (1958) featuring the artistry of Karl Emil Georg Gerhard (14 April 1891 – 22 April 1964), and scores of other music, not simply valuable for its historical value, but also music that is eminently enjoyable even today.

Admittedly, the 1960s and 1970s were decades of great upheaval in the land where Jazz was first created: the USA, with its post-bebop struggles that empowered voices such as Ornette Coleman, Don Cherry and others, and this revolution with a resurgence of the Blues quickly spread across the pond, and to the UK, France, Germany and to Scandinavian countries Denmark, Norway and Sweden – with rich folk traditions – that quickly put their own spin on things. And it is this heritage that finds its way onto Svenska Jazzhistoria Vol. 11 Swedish Jazz History 1970-1979 Jazz Cosmopolit – all four disc of it. 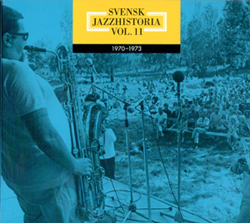 The music is, of course, chronologically arranged with the music on each disc culled from the 1970s decade. Familiar – and famous – names might crop up throughout the repertoire on each of these four discs. For instance, on Disc One (1970-1973) following the viscerally exciting “En Solig Dag På Landet” by Arbete & Fritid and the wild and gorgeously textured “Svit Cosmopolit, (Final Part)” from the famous Swedish Radio Jazz Group, Georg Riedel & Radiojazzgruppen, we find music from Sveda, a monumental meeting of minds such as the Swedish tenor saxophonist Bernt Rosengren and the almighty Turkish percussionist brothers Okay Temiz and Akay Temiz and the great Turkish trumpeter Maffy Falay, playing “Batum” based on a Turkish folk tune. The disc also includes a brilliant rendition of Dizzy Gillespie’s “Manteca” from tenor saxophonist Nils Sandström and featuring Okay and Akay Temiz on percussion and Leroy Lowe on drums. And who can forget “Batiali” from the phenomenal band, Rena Rama, featuring drummer Bengt Berger, bassist Palle Danielsson, flutist Lennart Åberg and pianist Bobo Stenson? 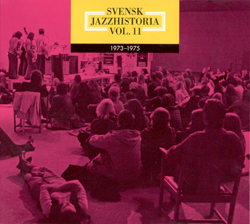 Disc Two (1973-1975) opens with Cole Porter’s “Love for Sale” and features an early Jazz émigré, trumpeter Benny Bailey with the Umeå Big Band. This is followed by a tender song, “There’s Something About Me” featuring Swedish vocal star Alice Babs, who once famously graced the Duke Ellington Orchestra. Here, however, she is part of a group that is led by pianist Nils Lindberg and also features the Swedish trumpet and flugelhorn icon Rolf Ericson (on flugelhorn). The Jan Garbarek-Bobo Stenson Quartet makes its appearance with perhaps the most famous version of Jim Pepper’s great piece “Witchi-Tai-To”. Monica Zetterlund and Steve Kuhn also appear on this disc with their absolutely superb, Sveriges Radio recording of “If You Could See Me Now”. before two great Swedish groups Iskra and Spjärnsvallet make their appearances with “Solsken Över Ångermanälven” and “Pojkarna” respectively. 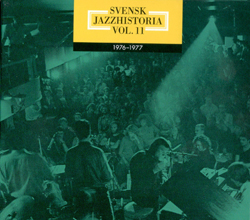 The second half of the decade begins on Disc Three (1976-1977). Radiojazzgruppen, fronted this time by baritone saxophonist Lars Gullin opens this set and features a mighty solo by the saxophonist on an extended extract from “The Aching Heart Of An Oak, (Part II & III)”. This disc also contains memorable charts such as “Funky Roots” by the group Häxmjölk, the visceral “Trabajo para Egba” by the band Egba that features the thundering vocals of the legendary Sierra Leonean musician, master drummer and father of Nenah Cherry, Ahmadu Jarr who accompanies himself on congas and a battery of traditional percussion. Also not to be missed is “High Society” by trumpeter Bent Persson, from his tribute to Louis Armstrong Louis Armstrong’s 50 Hot Choruses, an irresistible performance by the Sansara Music Band, “Birth Cry, Part 1” from its eponymously-entitled 1977 disc, and the return of Okay Temiz leading his band Oriental Wind, who perform the traditional Bulgarian tune “Les Noto”. 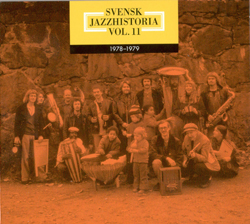 The final disc in this box, Disc Four (1978-1979) features such classic charts as Carla Bley’s “Ida Lupino” from the group Nexus, “Ping Pong” from alto saxophonist Crister Boustedt’s Quintet, “Skånsk Vinter (Winter In Skåne)” from Mamba, an ensemble featuring the twin trumpets of Tim Hagens and Rolf Ericson. Also on this disc is a sumptuous “Mardi Gras in New Orleans” by Sumpens Swingsters. And return assignments from Rena Rama, who play the beautifully ornate “Lisas piano”. Featured on drums on this outing is Leroy Lowe, who replaced Bengt Berger who was, at this time between Ghana and India, fine tuning his approach to an idiomatic dialect that would soon come to be called “world music”. This disc, and the monumental box set concludes with music by the powerhouse, all-female band Tintomara – “Dagen Efter (The Day After)” that features the breathtaking flute expeditions of Katarina Fritzén, together with pianist Elise Einarsdotter, electric bassist Jenny Wikström and drummer Marita Brodin.

There is, of course, a slew of tracks to explore on each of the discs, as can be seen from the listing below. Best of all is the 188-page booklet that comes with this package. It comprises eight fabulously researched essays including a 1970s historical overview of the Swedish Jazz scene, a wonderful essay on Rena Rama’s India expeditions, a profile of the icon, Lennart Åberg and another on iconic pianist Monica Dominique, and best of all, perhaps the brilliantly-written “and documented