Home Music TJP: Peace and Love
In the cultures of Africa, Europe, China, India, and the Americas, the greatest storytellers have been either the poets of the spoken word, or the poets of song. Either way their poetry of feeling has forever defined their work during their time and, eventually for generations to come. The vocalastics of Paul Jost fall into that latter category. Although his is a short history, in just three albums he has already made his mark among the elite of his art. His extraordinary 2017 album Peace and Love with TJP (The Jost Project) finds him skittering and gliding through gloriously re-harmonised repertoire (by himself and long-time cohort and vibraphonist, Tony Miceli), and his voice, as priceless as the rarest of raw-silk, sounds more magnificent than it ever did in Can’t Find My Way Home (Dot Time, 2013) and Breaking Through (Dot Time, 2014).

Perhaps the real reason that Paul Jost stands head and shoulders above any other vocalist in his art is he appears not only to let the music speak to him, but first immerse himself in the stories they tell. Thus the trees in a landscape (of “Shenandoah” or “America” of Simon and Garfunkel or Simon Ward), for instance, or the burbling of a brook (in Tom Jobim’s “Waters of March”), even the very translucent silence itself (of “Hush” and “Whiter Shade of Pale”) 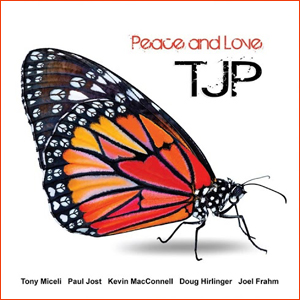 become the sap that infuses his voice as he makes all of these songs come alive like some miraculous, mystical awakening. His phrasing is no less miraculous and in his pristine articulation, Mr Jost dips into a colour palette that is not only most unusual, but also vast and encompassing of an impossibly wide register.

The nature of repertoire is not – never has been – an issue that would affect the outcome or the quality of a Paul Jost and TJP recording. Still, it is intelligently selected and always flawless. Eventually one is left with the impression that (if song history were to be wiped out) it would appear the music in question has been created for no one but Paul Jost. In reality, of course, Mr Jost makes each song his own; which is why he has been spoken of as a worthy successor, among male vocalists, to the legendary Mark Murphy. On evidence from the three albums he has recorded so far, this proposition is put beyond doubt. In every one of his songs – including these on Peace and Love – whether he is breathing the air of the wistful, the world-weary, the melancholy; or savouring the head-winds of a soaring, joyful flight, his voice floats and weaves with clarity and precision, often accented with some emotionally-attuned virtuoso harmonica playing as well.

Lest we forget, Peace and Love is also a TJP recording. And as such Tony Miceli, bassist, Kevin MacConnell, drummer Doug Hirlinger, saxophonist Joel Frahm and the gorgeous voices of the Philadelphia Arts Chorus have a very large share in the beautiful outcome of the album. Their individual roles in creating the unique atmospherics (for instance on songs such as “Hush”, “Get Together/Waters of March” and “Time of the Season”) and around which the album is built is unique and irreplaceable. Still it is for the voice of Paul Jost that aficionados of great music will die for.