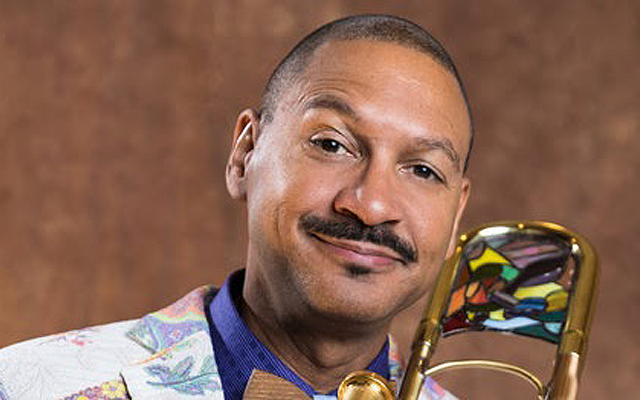 The word ‘Marsalis’ – a proper noun no less – has also come to be apocryphal, certainly in terms of American heritage, and specifically in the Afro-American art of Jazz. However, it pays to pause a moment and spare a kind thought for someone other than Wynton Marsalis to signify all that is eponymous with that sacred art for first came Ellis Marsalis Jr, patriarch of the dynasty that, let’s be sure also includes, musically speaking, the saxophonist Branford, the drummer Jason and of course, trombonist Delfeayo Marsalis, who, for those somewhat less initiated is first among equals. But lest we have a tendency to forget because of the high profile of Jazz at Lincoln Center, Delfeayo Marsalis remains in the trenches (them being in NOLA), broadcasting every so often with an album and/or a stage performance that takes your breath away.

Is Kalamazoo, one might assume, par for that proverbial course? It’s hard not to think of the record as being a finer work of art than Delfeayo Marsalis has produced in his young and distinguished career. And here’s why. First of all this is because listening to the record unfold from the initial bars of “Tin Roof Blues” (onwards) listeners will feel as if they are being treated to a history lesson on the high art not only of the Blues and Jazz, but of the very art of the trombone. A note or two into Delfeayo Marsalis announcing the song, one feels the presence of Al Grey, begat by Trummy Young, and JJ Johnson…woken from the long, long sleep of kings and dramatically conjured by the raw-silken gravelly tone of Delfeayo Marsalis’ trombone. 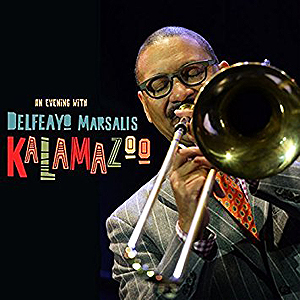 Second is the presence of the reticent doyen of Jazz, Ellis Marsalis Jr himself. And that is another history lesson in itself; save that for a longer evening, savouring cigar and expensive cognac, and the smell of endless heritage and old mahogany in a vaunted library…

Mostly, however, greatness may be measured in transcending the standards that might apply to the so-called earthly realm. Every note you’ll hear propelled out of the bell of Mr Marsalis’ trombone is played as if life depends on it. There is nothing obvious about notes and phrases. Each one seems to impel the black dots to leap off the page. Every piece here – and I mean every note in every piece here – is played with languid and supreme ease, each melodic variation following the other, quite inexorably, Mr Marsalis’ sumptuous trombone sound brilliantly caught in this live recording. There’s an unhurried quality to his approach, a lived-in character to his phrase-making that is born of the fire and brimstone of youth melded in with the well-honed values of experience. As a result each beautifully-crafted arrangement of a beguiling array and sensuousness is lovingly crafted into classics such as “Autumn Leaves” and “If I Were a Bell” and “Do You Know What It Means To Miss New Orleans?”

Finally, none of this praise could be justified without recognition for the musicians who also appear on this great recording. Ellis Marsalis Jr is the supreme master of expressionist colours. His playing, as ever, is marked by a sure sense of harmonic delineation in pieces as much in “My Funny Valentine” as it is in the authentic Blues works: “Tin Roof Blues”, “Introducing The Blues”, “Blue Kalamazoo” and in especially in the classy original “The Secret Love Affair”, a beautiful lament which is played with visceral passion and musicality. For the articulacy of his arco and vocalese solo in “If I Were A Bell” alone, you could nominate bassist Reginald Veal as the ‘man to beat on the bass’ and drummer Ralph Peterson plays with the kind of power that makes him a worthy successor to the great polyrhythmist, Art Blakey. It bears mention also that vocalist Christian O’Neill Diaz and drummer Madison George – both of whom appear on “Blue Kalamazoo” are no side-show either. Like their formidable senior band mates, they too are completely attuned to Delfeayo Marsalis’ vision and artistry. For these reasons alone this record is one to die for.