Home Music Tina Raymond: Left Right Left
The witch-hunting Joseph McCarthy may be long gone, but the enemy of true socialism is the wishy-washy liberal democracy practiced almost anywhere in the world particularly in the noisiest part of the world: America, the loudest voice when crying foul about Human Rights. So to find artists who create explicit works in the name of socialism is refreshing, even when the artist(s) in question – in this instance, the drummer Tina Raymond who seems to do so at least in her booklet notes to Left Right Left – seem(s) to take a ‘softer approach’ to the vexing question of politics in art. But this is – if anything – only perplexing as far as the notes are concerned. The music is quite another matter.

In many ways Tina Raymond has done what most, if not all, musicians (and probably all artists too) want to express: a sense that they are on the side of the underdog, the oppressed, the dispossessed; the wretched of the earth. What’s even more remarkable is that she has done it through instrumental music which is extremely difficult to do effectively given that her efforts precludes the use of words (and therefore polemics). Consider “Pastures of Plenty” and “Union Maid” – both by Woody Guthrie, and “If I Had a Hammer” by Pete Seeger, iconic American artists known for their Marxist ideals; “Lift Every Voice and Sing” the “Black American National Anthem”— written as a poem by James Weldon Johnson in 1900 and 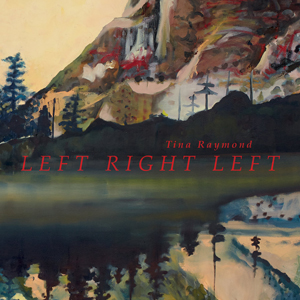 set to music by his brother John Rosamond Johnson in 1905, “Saigon Bride” by Joan Baez, also known for her vocal leftism… Even without the songs’ lyrics Miss Raymond has managed to not only make a powerful political statement, but do so in a superbly artistic, yet unselfconscious manner.

One of the musical devices that seem to have served Tina Raymond extremely well throughout this repertoire is Dissonance. In “Battle Hymn of The Republic”, for instance, Miss Raymond beats out a terrific military tattoo as Art Lande makes his rambling foray into dissonance with a series of disturbing phrases culled from Julia Ward Howe’s iconic melody and Putter Smith rocks an unsteady beat. Suddenly, in one fell swoop, all semblance of balance and even the expressive safety net of the song (its words) is gone; abandoned in favour of challenging the music to express literally everything. In classical music this is quite common but in that style of music the artist has access to (sometimes) over a hundred musicians and a variety of instrumental timbres to achieve this desired result. Meanwhile Tina Raymond does this on the drums; and moreover even without brass and woodwinds to better the chances of achieving the intended result of this music: to show empathy for the human condition with such quintessentially poetic style.

Clearly Tina Raymond is more than a drummer. Her musicianship is of the highest order and she thinks metaphorically, something that enables her to get much deeper than the skin of these songs. In the Woody Guthrie, the Pete Seeger and the Joan Baez songs – three of four songs that she has arranged for this trio, she has captured in nuanced sonic images, the poetry of the lyrics without even using them. One of the ways in which she has – seemingly magically done this – is by slowing the tempo just that little bit so to give the feeling of an interminable dance of life so to speak. Also, by slowing down the time, she has eschewed any rhetoric or didacticism, which not only opens up the ‘songful-ness’ of the music but throws brings new meaning to these old songs. What a wonderful way to shut down the metronome and showing just how wonderful her sense of time is. Rarely, if at all, has an artist in almost any style of music been able to express outrage for the wretched of the earth with so loud – and yet so lyrical – a voice.