Home Music The Heliosonic Tone-tette: Heliosonic Toneways Vol. 1
The recording of these seven “Heliotones” (and their component parts, where applicable) celebrates the golden jubilee of The Heliocentric Worlds of Sun Ra by the grandmaster Sun Ra, and his iconic ensemble the Arkestra. That odyssey was recorded between April and November 1965 by the band that had been together since 1952. Inspired, no doubt by those earth-shattering musical events the multi-instrumentalist Scott Robinson has brought together The Heliosonic Tone-tette, a band beholden to the ideas envisioned by Sun Ra, interpreted here in these seven “Heliotones”. This extraordinary musical adventure by Mr Robinson is certainly not his first one in which he has utilised his myriad wind instruments (some of which are much too complex to explain in this short work) in a search for new tonal pathways. But this one is certainly different from all others.

The work – for it is a monumental sixty-minute and then some orchestral procession in which the listener is led slowly through ever-changing musical scenery, viewing the same landmarks (called “Heliotones”) from constantly evolving perspectives in a sort of colossal ‘triumph of Heliocentric Time’. This exposition of the music’s tomography is tonal rather than chronological – typical of the music of The Heliocentric Worlds of Sun Ra; indeed typical of the world of Sun Ra, himself. In the hands of (and from the instruments that sing at his lips and hands) Scott Robinson and The Heliosonic Tone-tette have created a work 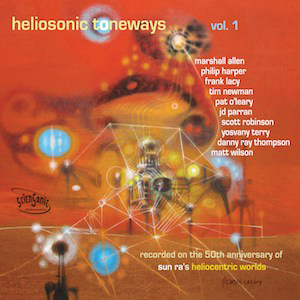 of hauntingly sombre lyricism – powerfully muted for most of its length, but rising every now and then in a series of vast shattering climactic moments. Through it all Mr Robinson is locked in an interminable dance with the venerable Marshall Allen, Frank Lacy, Philip Harper, JD Parran, Yosvany Terry and Danny Ray Thompson (the other Arkestra alumnus) among others.

As each of the segments (there are eleven if you count ‘a’ and ‘b’ segments) instrumental signposts stand out: the melodic fragment for horns and the responses of Pat O’Leary’s contrabass and Matt Wilson’s drums, timpani, Korean gong, and dragon drum which is heard on “Heliotone 3b”. These remind us of Scott Robinson’s – and of course Sun Ra’s – lyrical gifts, all the more for never being overindulged anywhere across this first volume of Heliosonic Toneways. After taking being inspired (if only in name) from Sun Ra’s helical metaphor, The Heliosonic Tone-tette improvises further on its musical mission by seemingly organising the ensemble into ‘tonal strata’ whose shifting relationships evoke the massive natural forces that shape the planet and its sun and the tonal rivers that ensue from both these life-giving entities.

Sometimes these ‘tonal strata’ stack up immensely; at other moments, they thin to the most diaphanous textures of their instruments; but always there is a sense of returning to the same (helical) point, only to discover that the view has changed in the interim. On top of these (eleven) seismic musical processes, Scott Robinson (with The Heliosonic Tone-tette and its aristocratic tonal tussles with one another) creates a virtuoso orchestral superstructure whose riotous details suggest the teeming surface life of the Earth in all its protean tonal variety. Heliosonic Toneways Vol. 1 can surely be counted among the stellar recordings of any period and one can only wait with bated breath for Vol. 2