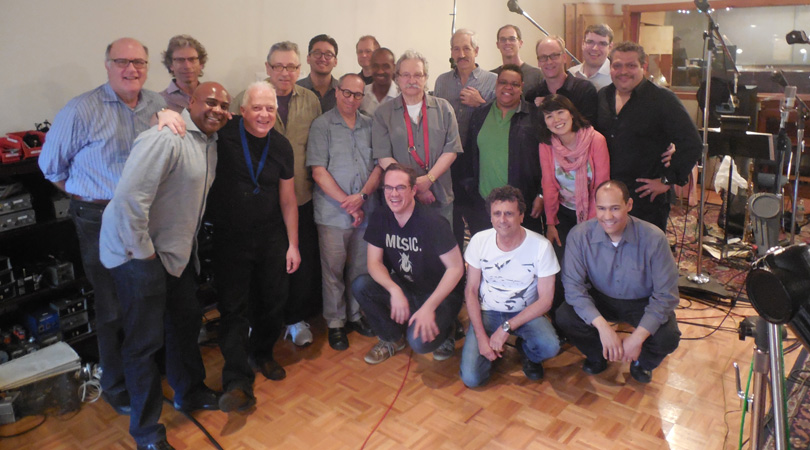 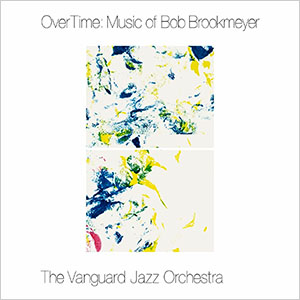 There is a recording that Bob Brookmeyer did in 2006, a few years before he died, entitled Spirit Music, which is probably the most appropriate title he ever gave one of his albums. Indeed his music—all of it—came close to the connotation of spectral music. He will be remembered for embracing the voices of the instruments of a big band. The trumpets, French and English horns, trombones, reeds and woodwinds (clarinets, oboes the bassoon, flutes and saxophones) gave the music he wrote and arranged a voice that was rich in texture and burnished and gleaming in timbre. This is how his music is remembered in a magnificent recording, OverTime—Music of Bob Brookmeyer by the Vanguard Jazz Orchestra, as the Thad Jones—Mel Lewis Orchestra came to be called after the death of Mel Lewis in 1990. This recording has been made under the direction of alto saxophonist and flutist Dick Oatts who has masterminded the performance of Mr. Brookmeyer’s arrangements for this superb 16+3 orchestra. It is a landmark event, perhaps one of the finest big band recordings made in the last decade, if not more. And it is not only the arrangements of Bob Brookmeyer that have made it so.

The performances of the artists here, all starts in their own right, are collectively as stellar and stronger on the works’ dramatic element in what could easily be described as its spiritual dimension. If it ever gets nominated for awards, which much of Bob Brookmeyer’s work did, it would be deemed Hors Concours although it ought to win because of its packaging. But more so because of the music, all of it, which is singularly beautiful. “Suite for Three,” is a piece in three sections and for three brass and winds is hair-raisingly dramatic for its content and execution. The voice of the horns is so elegant the music might have well said to have been sung here. “Skylark,” with its multiple textures is equally beautiful even in its resonant dissonances and Bob Brookmeyer’s arrangement of it might easily have said to be made up of latter day Renaissance polyphony. Such is its superb craftsmanship and timeless beauty. It is laudable to have such a varied selection of longish works composed by Mr. Brookmeyer on a single CD, so much so that it leaves the listener wanting more—a double-CD of more of the same perhaps, but then it is appropriate to settle for this one, especially after listening also to “Big Time,” “XYZ,” measured and exquisite pieces; and “At the Corner of Ralph and Gary.” But surely the crowning glory is the piece, “Sad Song.”

None of this, of course, not even the finest work by Mr. Brookmeyer, would have been possible were it not for the superb work of this big band under the guidance of Dick Oatts. The players are not simply accomplished in their own right; they give of their best in a manner that fashions the finest work in an ineffable way. Individual details are striking throughout and the sense of beauty is regarded every time a phrase or a line is sounded. In fact the one word to describe the effect of this album on the ear would be “monumental.”

About The Vanguard Jazz Orchestra

Founded as Thad Jones/Mel Lewis Jazz Orchestra and so named until 1990. Thad Jones, who was featured in the Count Basie Orchestra, and LA based drummer Mel Lewis, who played with Stan Kenton Orchestra, started the band in 1966 with some of the top studio musicians in NY. The beautiful melodies and unique arrangements of Thad Jones enchanted the audience. The mixture of the music from diverse backgrounds created the innovative sound and the band was quickly recognized as a world’s class big band. Read more…