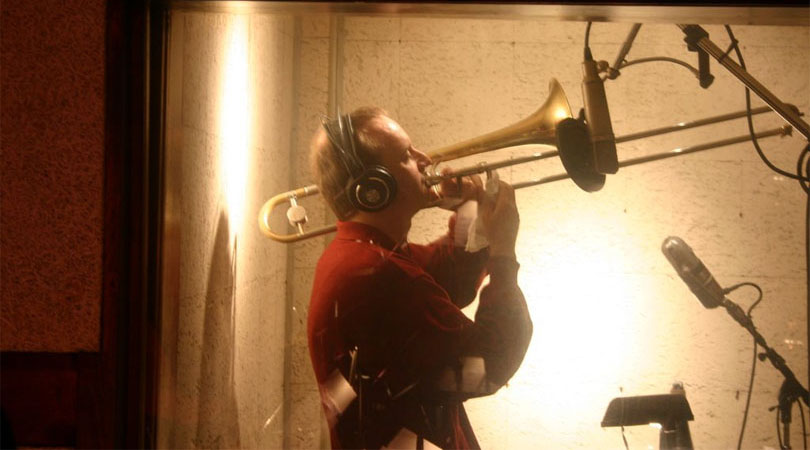 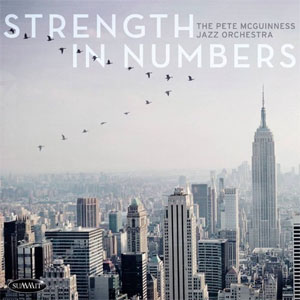 There is something about a large jazz ensemble that, like its symphonic counterpart, is quite breathtaking. It seems that the music comes from a deep place in the musicians’ hearts and from a magical palette; with wondrous colours, whirling and twirling zigging and zagging as the notes and lines are woven into a singular musical tapestry. The mystical tones and mighty timbres from brass and woodwinds; from growling bass and mesmerising drums are jumping and dancing an interminable dance of the delighted soul. This is the music of The Pete McGuinness Jazz Orchestra playing one exquisite chart after the other on Strength in Numbers, only the second record made by Mr. McGuinness as leader. This album shows that the trombonist and vocalist, composer and arranger. Clearly Mr. McGuinness is a masterful writer and his work has been characterised by writing informed by the intelligent and sophisticated use of short gestures and sometimes long ones too. And writing thus Mr. McGuinness seems to have developed musical literature seemingly inclined towards the music of the wonderful Bob Brookmeyer the great Thad Jones; only that Mr. McGuinness’ work is of a singular nature, informed by a celestial thunder followed by the hissing calm of soft voices “singing” in brilliant counterpoint. It is clear that Mr. McGuinness has developed a language and dramatis personae rich in the interaction of various protagonists with spellbinding music on their lips and in their hearts.

It is hard to single out a single chart for special mention, but the music of this album is superbly announced by the exquisite and skittering piece, “The Send-Off,” a chart that by its very excited and beautiful nature of its motivic gestures set in the jibber-jabber of horns talking with a superb drummer, Scott Neumann, with the piano mediating. It is in this highly charged atmosphere that the tone is set for a magical series of charts to follow. And these seem to tumble one after the other from the pen of the writer. With writing so beautiful, it is hard for soli not to follow suit. From tenor saxophonist Tom Christensen to pianist Mike Holober, bass clarinetist, Dave Reikenberg, bass trombonist Jeff Nelson and alto saxophonist Marc Phaneuf and tenor saxophonist and trumpeter Chris Rogers… and musicians who play in the ensemble, each musician is a master of his own instrument and makes a joyful noise as they play the writer’s soulful and sophisticated lines. It is as if each of the charts speaks the reasons and the rhymes of music arising like the spreading brightness of a dawn of a new day. Here is music, such as “What Are You Doing For The Rest Of Your Life” and “Trixie’s Little Girl,” and “Spellbound” as well as the Stephen Foster classic “Beautiful Dreamer” and more that appears to have been first etched with some light and then some shadow, forming the outlines of a beautiful series of pictures that are then filled in with details coming from harmonic patterns of immense beauty.

The bass, in an orchestra filled with exquisite brass and woodwinds, is often forgotten as it lies in the back of the ensemble but in this orchestra it is something special. The magnificent Andy Eulau is a true magician. He takes music and, in all too brief soli, shapes it by moulding and massaging the melody until it is brought to an all new state of being more exquisite than when it was last heard. However, in truth, this recording belongs to Pete McGuinness, a great craftsman who creates an enduring art and from whom many more beautiful things are expected in the time to come.

About The Pete McGuinness Jazz Orchestra

After years of performing with and writing for numerous jazz big bands, Pete finally decided to realize his life-long dream and front a large jazz ensemble of his own. The Pete McGuinness Jazz Orchestra was formed in 2006 and immediately began performing in NYC area jazz clubs. It features all of the various aspects of Pete’s musicianship – as a trombonist, composer/arranger, and jazz vocalist. Pete’s music for the band is a reflection of all the many great jazz writers Pete has loved and been influenced by throughout his life, including composer/arrangers Bill Holman, Bob Brookmeyer (a former teacher of Pete’s), and the late Thad Jones, as well as more recently established voices, such as John Fedchock and Maria Schneider, creating a sound that is uniquely his own.

With a line-up of some of NYC’s very best big band players and jazz soloists, there is a variety of exciting and interesting personalities in the group which help spur Pete’s various arrangements on (see “galley” page to view photos of all of the musicians in the band). Like Pete, most of the players have spent time with many other well-known jazz big bands, including the Woody Herman Orchestra, the Lionel Hampton and Buddy Rich big bands, the Maria Schneider Jazz Orchestra, John Fedchock’s “New York Big Band”, The Vanguard Jazz Orchestra, and others. Some of the musicians, such as trumpeter Bill Mobley and pianist Mike Holober lead full jazz orchestras of their own.

In September of 2006, the band went into New York’s famous Nola recording studios to record its debut CD, “First Flight”. Pete was ably assisted by legendary trombonist-arranger ­bandleader John Fedchock, who acted as session producer, and later provided the linear notes for the finished CD. In January 2007, the band and the CD project caught the attention of the A + R people at Summit records, and the CD was set for release. In June of 2007, “First Flight” was put out nation-wide. This was followed by “Strength in Numbers” in 2014.