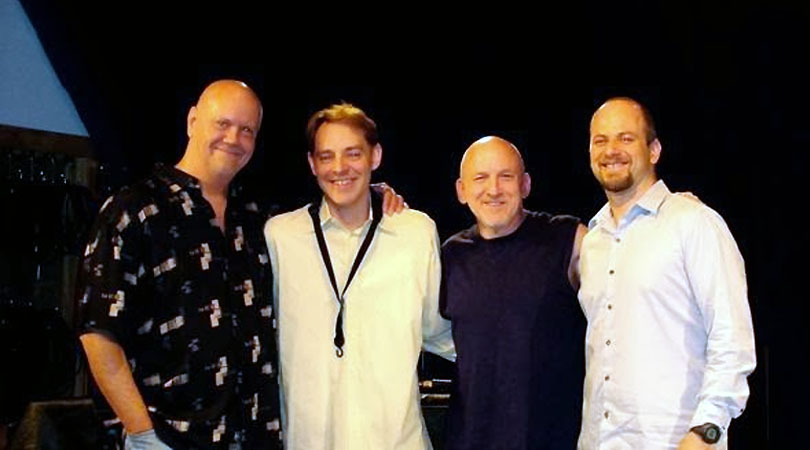 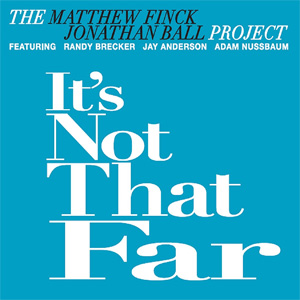 The title of this album The Matthew Finck—Jonathan Ball Project: It’s Not That Far might seem innocuous; even diffident and non-committal. In fact titles like this have become so commonplace—names attached to the word, “Project” that they often pass like ships in the night. If the music is not heard and listened to even once, that is. Then they are often appreciated as this recording ought to be. As a tenor saxophonist in a piano-less ensemble is also not unusual—Sonny Rollins did it very successfully and if that analogy is extended to all saxophones, then Ornette Coleman almost always recorded with one, so there is precedent. Then the group has to make amends for all of the above. That is, if the quartet is not the Matthew Finck—Jonathan Ball quartet. Then there is no need for any apology. The tenor saxophonist and the guitarist are an awesome tag team. Their melodies have been cast with sophisticated counterpoint and the harmonies make sweet music. Many of the songs are played at a sensuously slow pace with the broad and sonorous voice of the horn enticing the rolled gold notes of the guitar into an interminable dance of seduction. So the musicians do not really need a rhythm section as heavyweight as Adam Nussbaum on drums and Jay Anderson on bass.

However now that the duo have this celebrated partnership to glory in they make the best of it. And for the record, that is not difficult at all. The drum and bass partnership of Adam Nussbaum and Jay Anderson have been around for over a decade and have performed honoris causa and a good remuneration, no doubt, in bands such as John Scofield’s and both understand the importance of listening. This is why they are considered among the most sophisticated and cultured rhythm sections in the business. Here the duo shows that they are no less cognoscente of the tenor saxophone and the guitar. And what a difference that makes. Jonathan Ball is able to modulate his big, round and warm voice so he can play bug phrases in silken voiced sotto voce when the music (“Levin’s Impression”) calls for it; and then he can wrestle with the flugelhorn of Randy Brecker on “Gentle Soul”. And Matthew Finck, ever the graceful cohort, glides in and out of the proceedings, empathising with Mr. Ball and rocking it when the need arises.

And then there is “Geppetto” which is surely headed for classic status. The chart, based loosely on Wayne Shorter’s “Pinocchio” it is a suave masterpiece and showcases the mastery that Mr. Ball has over his big horn. The tug-of-war between Mr. Brecker and the rhythm section follows until Matthew Finck brings calm to the proceedings. This is clearly a chart that is light years ahead of the rest; a chart that is light years ahead of much of the music that is composed and played today and for that and the performance the ensemble deserves five stars. The group also makes another classic of “The Way You Look Tonight”. Add it all up and this is a truly fine recording. Pity about the name of the recording.

Track List: It’s Not That Far; Gentle Soul ; Levin’s Impression; I Thought You Had Gone; Conundrum; East 86th; Geppetto; The Way You Look Tonight; Get Up!.

The outstanding guitarist/composer educator Matthew Finck’s remarkable musical journey literally began at birth; and through its progressive twists and turns has now hit a new plateau with his current co-led ensemble: The Matthew Finck Jonathan Ball Project. In between lies a fascinating story of influence, inspiration, search and discovery that has led to Matthew’s reputation as one of the most respected and versatile guitarists on the New York scene.

Through his father – prominent saxophonist and teacher who worked steadily in jazz ensembles, Broadway pit bands and with top name entertainers in the Borscht Belt and all over the U.S. – Matthew was surrounded by a wide assortment of musical and popular artists since childhood. This “second family” included such diverse figures as jazz artists Roswell Rudd, Anthony Braxton, Frankie Dunlop and Ed Summerlin, composer Meyer Kupferman, choreographers/dancers Maurice Hines and Mercedes Ellington, and popular entertainers Milton Berle, Sammy Davis Jr. and Jackie Mason.

The influence and inspiration that stemmed from these childhood experiences took firm root as the young man took up the guitar, and by the time Matthew entered high school, he was sitting in regularly alongside his father and Rudd in the Granit Band, a fixture on the Hudson Valley scene. Graduating cum laude from Long Island University in 1997 he soon after became a fulltime member of the New York scene. A flurry of musical activities were set in motion, but none more affecting than embarking upon a five year period as a regular on the Harlem scene, participating in the organ combo tradition that was such a major part of its storied history. The camaraderie with the other musicians and the interaction with the most appreciative audiences solidified Matthew’s sense of musical expression and its effect on the listener. Surrounding this constant element in his career, Matthew continued to pursue his guitar skills with a variety of notable teachers, including Eddie Diehl, Gene Bertoncini and Jack Wilkins while also honing his compositional talents.

Over the past 15 years he has performed and recorded with such fine artists as Steve Wilson, Dennis Mackrel, Randy Brecker, John Medeski, Heather Masse and Roswell Rudd, recording and touring the U.S. and Europe with the great trombonist. An extremely versatile musician, Matthew has performed with the Hudson Valley Philharmonic with Ronan Tynan and Chris Barron (of the Spindoctors), as well as backing up such popular singers as Nell Carter and Tony Martin. He also freelances in a variety of settings including blues; rock and funk, leading his own funk band Fat Mink since 2005, and composes and performs music for video games. Widely recognized as an innovative teacher, Matthew has always included education as an important element of his overall vision and imperative. He currently teaches at College of Saint Rose in Albany and is pursuing his Masters in Music at SUNY Purchase.

As full as his schedule is, the Matthew Finck Jonathan Ball Project is his primary musical focus these days. With a stellar lineup on their new album – including Randy Brecker, Adam Nussbaum and Jay Anderson – It’s Not That Far marks just the beginning of what promises to be a remarkable journey. Currently performing in the Northeast, a tour is in planning and the second CD will be recorded soon, adding a Hammond B3 to the mix. For Matthew, this is the new point of departure of an already rich journey of musical expression.