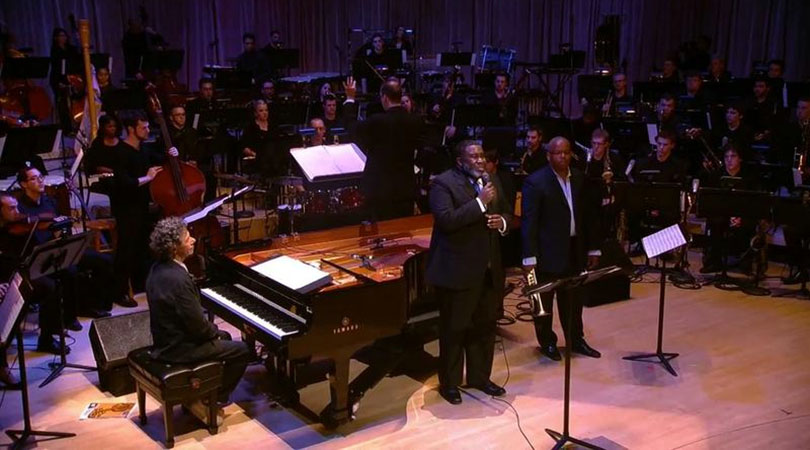 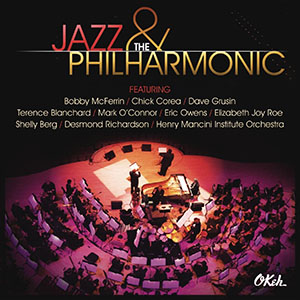 A Philharmonic Orchestra featuring appearances by stellar jazz artists… some might suggest that it has been seen and heard before, beginning with Norman Granz’s JATP. But something of this magnitude that has brought together your artists in a Philharmonia together with the likes of vocalist Bobby McFerrin, pianists Chick Corea, Dave Grusin, trumpeter Terence Blanchard’, violinist Mark O’Connor and the classical singer Eric Owens and the dancer Desmond Richardson (in the accompanying DVD). Now that turned out to be something truly special; something absolutely memorable. And there are manifold reasons why, some of which are certainly not circumstantial. To begin with musical director and pianist Shelly Berg’s suggestion that this was taking the idiom of jazz to the very roots of classical music is a very credible one. After all Bach, Beethoven and Brahms… and all the classicists added great cadenzas—improvised passages—to the music they wrote. Thus the suggestion is that what is known as jazz music is all part of the cultural ethos of classical music as the idioms are related in that they not only use scales that are similar, but at some time both music idioms have been wholly or at least partially improvised. Not only that, much of jazz today is also written; programmatic in some if not almost all its compositions. Certainly if the music of Jazz and the Philharmonic is any indication this is not only at least partially true, but quite a successful marrying of the two, the musics being apart by only a few degrees of separation.

The second suggestion, and this is entirely because of this recording, is that the two idioms of music can be played together not only forming a successful programme, but a very memorable one at that. If the listener turns an ear to charts such as “Fugue in C Minor,” which features Terence Blanchard slanting the vaunted lines of his trumpet across the monumental baritone of Eric Owens; or to “Mountain Dance,” where Dave Grusin and Mark O’Connor rise to the occasion to suggest some sort of double-concerto with the Henry Mancini Institute Orchestra, a Philharmonic made up of young graduates, some of whom include Elizabeth Joy Roe, Terence Blanchard and Desmond Richardson… It is certainly something that is quite breathtaking and bodes well for further collisions between the two musics. One of the most memorable performances actually comes from Elizabeth Joy Roe, a pianist of overwhelming virtuosity, who also plays—as she does on “The Man I Love” and “Solfeggietto”—with exquisite expression and a keener sense of nuance; something that gives rise to extraordinary gesture and motivic brilliance, all coming together in a performance of utter genius. The other memorable performance comes from Terence Blanchard who turns his mastery of the trumpet into a devastatingly beautiful assault on the senses. Of course the stars also came out for this performance. Bobby McFerrin is something extraordinary; an artist of rare and unbridled genius who lights-up the stage no matter whether he is soloing or playing with an ensemble. Then there is Chick Corea who always lets it slip that he is classically orientated even when he plays jazz. And Eric Owens, singing with a deep sense of gravitas recalls to mind the great baritone Paul Robeson.

Finally there is Shelly Berg, a pianist of such grace and a musician and musical director of bountiful ideas and enthusiasm. Mr. Berg conducts with absolute understanding of score and plays the piano as if it is about to consume him; indeed does consume him musically speaking of course. This package is also memorable because the CD and the DVD—although the fare is similar—seem so different that it is also possible to enjoy each so separately. This is rare indeed and the reason is that the concert was treated with a different script; to produce a visual experience the likes of which could be enjoyed independently of the audio-only one. None of this would have been possible without the great producer Phil Ramone, who tragically died after the production, and to whom it has been rightfully dedicated, and Larry Rosen as well. Both of these fine gentlemen whom ought to be remembered as an integral part of this extraordinary and unforgettable musical experience.

About Jazz and the Philharmonic

In addition the project features violinist Mark O’Connor, whose career has been based on the intersection of classical music and American folk music, Met opera star and YoungArts alumnus Eric Owens, classical pianist and YoungArts alumna Elizabeth Joy Roe, choreographer, dancer and YoungArts alumnus Desmond Richardson, YoungArts Master Teacher Shelly Berg and the Frost School of Music ‘s acclaimed Henry Mancini Institute Orchestra, conducted by Scott Flavin. The historic event is a collaboration of the National YoungARts Foundation, the Frost School of Music, the Adrienne Arsht Center for the Performing Arts, and JAZZ ROOTS: A Larry Rosen Jazz Series. The all-star concert event was presented and filmed at the 2,000-seat John S. and James L. Knight Concert Hall at the Adrienne Arsht Center on January 11, 2013.

Two years in the making from concept to broadcast, the project harkens back to seventy years ago when producer and impresario Norman Granz expanded the scope of the jazz audience from clubs to classical concert halls, staging an all-star jazz concert at the Philharmonic Auditorium in Los Angeles. The July 1944 show marked the first Jazz at the Philharmonic concert that grew into an institution with Granz assembling internationally touring ensembles for the next four decades. In February 2014 this project will expand on the concept by bringing together world-class artists, composers, arrangers, and a full size philharmonic orchestra to audiences around the planet. John Richard – CEO Adrienne Arsht Center for the Performing Arts – states: “Jazz and the Philharmonic was a truly historic moment in American music history that was only possible with the incredibly enthusiastic cooperation of four musical institutions. The concert represents Miami’s growing status as a music destination and is a testament to the power of music to unite us all.”