Home Music The Art Ensemble of Chicago: We Are On the Edge

The monumental repertoire that The Art Ensemble of Chicago has contributed to the continuum of music is a whole library in itself as critical to human history and culture – especially Black culture – as anything by any artist through the history of humanity. It’s not difficult to see why. Few groups of musicians have endured for as long as The Art Ensemble of Chicago, that vociferous voice of the Association for Advancement of Creative Music (AACM); not even Duke Ellington’s orchestra, Sun Ra and his Arkestra, and the Modern Jazz Quartet. But more importantly given that the group has been continuously refreshed by the infusion of the new voices and ideas that have become a part of the core foundation created by Roscoe Mitchell, Famoudou Don Moye, and Lester Bowie, Joseph Jarman and Malachi Favors Maghostut – the latter three continuing to exert considerable influence in thought and action from the spirit world, and by the music they left behind. This is music that has always defied category, its idioms culled from the vocal and musical traditions of the African origin of civilisation and from the music of the western and eastern world that arose from the human diaspora that peopled the edges of the world. 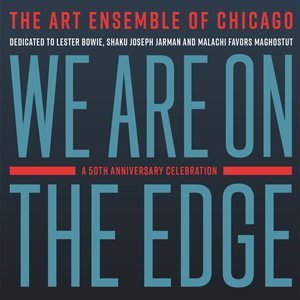 How appropriate, then to celebrate its 50th Anniversary with a recording that celebrates just that form We Are On the Edge is just that; music that is the cutting edge of art expressed by a collective humanity in the realm of sound. Add to that the fact that by the sheer force of its visceral energy this music has come to be the standard for generations of musicians to follow not only now, fifty years since it first found expression in Chicago, but in all likelihood this music will last long after its original creators have gone. The simple fact is that new generations of musicians have bought into the ideas and concepts of The Art Ensemble of Chicago which has bred culture that is now genetically entrenched in all forward-thinking musicians. This presentation adds an impressive element to the Art Ensemble of Chicago’s repertoire that was recently also celebrated by ECM Recordings with a gigantic 17-disc boxed set. Like that retrospective this is also a phenomenal collection of primal music, but it is almost all newly prepared and performed in the studio (Disc One) and on stage during Edgefest in Ann Arbor, MI in October 2018.

And it is thunderous, earth-shaking music, its melodic and harmonic elements to the music provided by Mr Mitchell, Hugh Ragin, Fred Berry, Nicole Mitchell, together with Jean Cook, Tomeka Reid, Edward Yoon Kwon and Christina Wheeler, buffeted by the rumbling viscosity of the three basses of Silvia Bolognesi, Jaribu Shahid and Junius Paul together a wall of percussion led by Famoudou Don Moye, with Dudù Kouaté, Enoch Williamson and Titos Sompa. The earth-shattering sound atmospherics are turned into a dramatic modern opera of our time with the poetry and lyricism of the vocalastics and recitatives of Moor Mother, Rodolfo Cordova-Lebron and Christina Wheeler. Although the music of Disc One and Two have not been conceived as a connected suite, the manner in which this music works inevitably turns out to form its own musical continuum with one piece leading into the next. Listeners can sense this right from the starting gate when The Art Ensemble of Chicago rips out the music of “Variations and Sketches from the Bamboo Terrace” onwards.

The manner in which the repertoire has been scripted enables it to swell in powerful waves and crescendos from “Chi-Congo 50” through the two parts of rises of “Jamaican Farewell”, the two parts of which have been separated by profound interludes. Taken together these two volumes of music might easily be said to describe a gigantic perceptual landscape of the heart and mind, a monumental, two-hour-plus sojourn that begins in the studio and ends outdoors with even greater energy and excitement as experienced on the perennial masterpiece by the Art Ensemble of Chicago, which is the twenty-minute “Tutankhamun”. Throughout the listener is led slowly through ever changing scenery, as if viewing familiar landmarks of an orchestral procession from constantly evolving perspectives. This seemingly geographical, rather than chronological, approach to time is typical of the sonic topography of The Art Ensemble of Chicago. Thus the music of these discs through their haunting and sombre lyricism is powerfully muted for most of its length, but rising to its proverbial climax at the centre of Disc One and from “Tutankhamun” on Disc Two, to its vast shattering climax. In its instrumental and vocal parts this music forms an eloquent and elegiac palimpsest to modern American culture expressed through its rich blackness that will always remain “ancient to the future”.