Home Music Ted Nash Big Band: Presidential Suite (eight variations on freedom)
The oldest freedom known to man, even older than any of the recorded event represented on this Ted Nash recording is the freedom to roam and enjoy the fruits of his earth-home. The inescapable truth is that first ‘home’, whether we like it or not, was Africa. There is ample paleontological proof of it to be found in the path-breaking work by Cheikh Anta Diop: The African Origin of Civilization: Myth and Reality. The proof of this truth, that is contained in the Miocece Epoch – that the entire human race is “African” – is the most inconvenient historical truth of all historical truths. As in the dimly lit halls of academia, so also in the corridors of Eurocentric power, such a discussion in the context of art does not sit comfortably at all. Just try telling that truth and see how far you’ll go. Not very far – even though we’re in the year 2017. However, it behooves us to acknowledge that we are asked to be witness to the “giant steps” we have taken in these monumental eight variations on freedom by the Ted Nash Big Band, in that uniquely authentic African idiom – Jazz.

Another historical fact that ought to be seared into the memory of all of us in Canada and the United States of America is that all of us including those of us who were forcibly brought here came after the first migrations out of the Rift Valley that took place when erstwhile African populations walked out of that continent and across land-bridges to Northern Europe, or canoed their way to Canada and North America. Suddenly the holes in the history that we have come to accept as our own appear larger than we will ever be willing to accept. And then there is this other – for want of a better term to describe it – strange and magical cosmic even that we have all been inexorably drawn into; one that welcomes Donald Trump a man more at odds with and ignorant of human history into the White House, following eight years of President Barak Obama, a man so acutely and completely aware of human history. The timing of all of these events alone ought to qualify Presidential Suite (eight variations on freedom) by Ted Nash as more than merely some kind of Dickensian coincidence; but an inspired act of God. 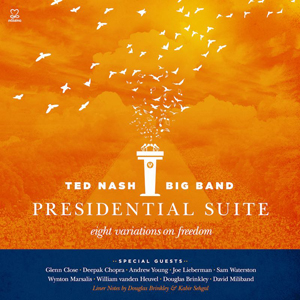 Despite the monumental missing piece of Native American freedoms, this Presidential Suite (eight variations on freedom is a substantial work of art. It successfully melds two forms of expression – the spoken word and orchestral performance (both written and improvised) into a seamless whole. Undoubtedly Ted Nash’s immersion in post-colonial history as we know it is everywhere apparent. This is coupled with his inspired fluency in orchestral performance and together these two factors have combined to make this performance a monumental experience. Nash combines a haloed sound with a sense of drama an unerring instinct for pacing. In passages such as Nehru’s “Spoken at Midnight” he combines the intellectual acumen of Jane Bunnett with a still more vivid palette. It’s not always left to Nash, however and in the shadowy opening of “This Deliverance”, as David Miliband reads Winston Churchill’s iconic speech, the late Joe Temperley’s baritone is a miracle of colouring combined with a sure narrative sense, as involving as if it possessed a text as the music grows in turbulence and menace.

Time and again, you marvel at the confidence and sureness of the individual players in the Ted Nash Big Band. It’s the kind of playing filled with finesse and musicality that goes way beyond performance where comparisons cease to matter. In each of the eight “freedom” narratives Nash brings out a kind of “Beethovenian” panache of writing by balancing the sheer variety of nuance in the timbral values of brass and woodwinds with restrained rhetoric brought out by perfectly judged tempo. Almost celestial in the wondrous ethereal beauty is “Water in Cupped Hands” the essay by Aung San Suu Kyi and its mystical narration by Glenn Close as it melts in and out of Dan Nimmer’s piano solo, which draws you in seductively but inexorably, revelling in the manifold beauties of this piece and its Lied-like narrative. The Presidential Suite is particularly impressive in the driving final, eighth movement “The Time for The Healing of the Wounds”, Nelson Mandela’s tribute to liberty read by Andrew Young, with a vocal and trombone solo by Chris Crenshaw. In this driving finale that contrasts so vividly with the rest of the band, a transition from innocence to menace and from bleeding to healing so beautifully conveyed by a band sounding for all the world like an instrumental ‘Erikönig’.

I cannot help making this personal and I am sure that at some point Ted Nash also intended for this music to be taken personally. Thus I find myself unable to forget my 4th of July moment, if you like. In November of 1985, when Ronald Reagan was President, I was hired to work at The American Indian Heritage Foundation in Falls Church, Virginia. My life was changed that day, when I bussed it down to meet Dr. Wil Rose and his wife, Princess Pale Moon Rose. Day after day I experienced through the reading of historical documents most Americans had not ever heard about, much less read. I became entranced by the traditional music and dance of Michael Walking Eagle, which I took in together with everyday rap-on-race lunch breaks with my life-coaches, Princess Pale Moon Rose, and the football factotum, Marshall Williams, both of who took me ‘in’ and also completely re-educated me about the history of the ‘stolen freedoms’ of the Native American and the Black American. What an introduction to ‘freedom’ and the American Way; at the hands of a quiet Black man – my first non-jazz-musician teacher – and a Cherokee family whose fight to regain access to ancestral burial grounds I had joined. It’s a ‘freedom’ variation I find missing on this recording, but then even as I am left breathless by this fine work by Ted Nash, nothing about life surprises me anymore…