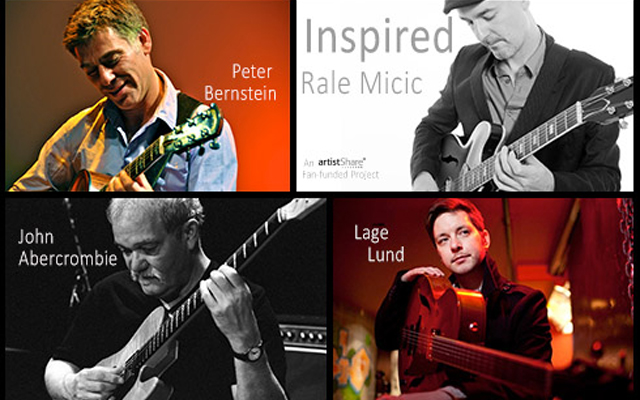 There has not been, nor will there likely be, a dearth of guitarists acknowledging a very large debt to and paying homage to Jim Hall. However, the nonchalant, playful charm of Hall’s musical genius can neither be masked, nor underscored with greater profundity than in the exquisite performances on Inspired by this quartet that includes John Abercrombie, Peter Bernstein, Rale Micic and Lage Lund. Each of the guitarists frames this recital with sizeable performances either solo, in duo, trio and quartet formations. In all instances the music takes the form of a vignette that is hushed and reflective, where the guitarists purr seductively and there are numerous magical moments gifted to the listener by each of the musicians throughout the recording. 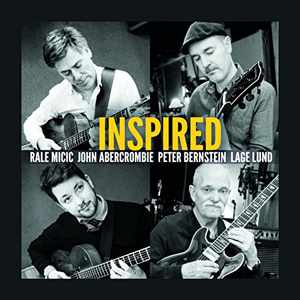 One cannot help but feel that Micic, Bernstein and Lund look to John Abercrombie to lead with the sublime delicacy of his thumb and finger picking. It should come as no surprise that this should be so. Abercrombie’s artful musicianship is well-formed and well-suited for this purpose. His maturity and his style remain deceptive, his limpid, euphonious tone artfully leavening his logical, but nonetheless oblique and unpredictable melodic thinking. It’s just the kind of thing you would want to draw into the music if you were Micic, Bernstein and Lund in the first place. As if to capitalize on this priceless gift from Abercrombie each of the others adds his own warmth, swelling dynamics and subtle inflections to three of Jim Hall’s original compositions on this recording: “Dream Steps”, “Bon Ami” and “All Across the City”. In each of these three charts the Inspired guitarists prove adept at creating monumental, all-pervading ensembles while leaving – in each instance – breathing space for the voice of the individual. The pieces played solo – “Alone Together” by Micic, “My Ideal” by Bernstein, “Body and Soul” by Lund and “Embraceable You” by Abercrombie – a performances of insurmountable beauty.

In other cases – music in which they perform as duos, trios or in the instance of the quartet performance – the guitarists offer individual voices, crucial textural components and complex meditations on the interactions between visceral humanity and the vitality that each of them brings to the music. Although one is hard-pressed to single out any particular song to make a case for this, “All Across the City” the one quartet piece on the album is the epitomé of this sublime interaction. It really is a flawless record where a quiet bravura element is present no matter where or to whom the listener’s ear is tuned into for, from end to end, the music seems to flow unimpeded as if gleefully egged on by the ghost of Jim Hall himself.

Track List: Dream Steps; Alone Together; Bon Ami; My Funny Valentine; I’m Getting Sentimental Over You; All Across the City; My Ideal; I Should Care; Body and Soul; I Hear a Rhapsody; Embraceable You.