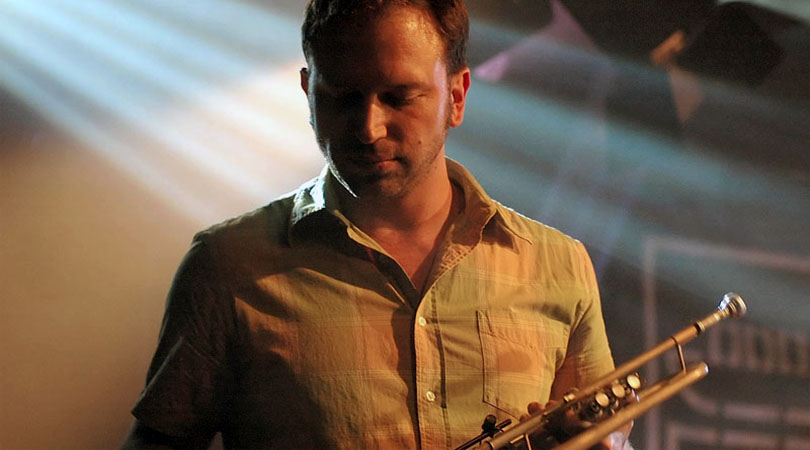 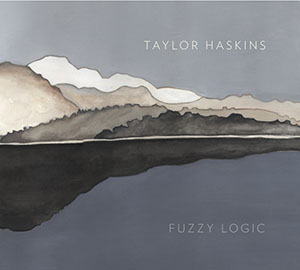 Of course there is no piano in Taylor Haskins’ somnambulating recording, Fuzzy Logic. A piano simply would not do; there is no room for an instrument of fixed pitch because the idea is to make sound that is infinitely variable; music that is infinitely variable. Thus, only the drums keep the rather indeterminate pulse going. Every other instrument, from the trumpet to the guitar and bass; the violin, viola and the cello bend and curl notes to make music of infinitely intervallic modes and musical episodes. The music is hauntingly beautiful, not only because of the Native American drone flute that Mr. Haskins employs on “Somewhere I’ve Never Travelled,” or the melodica that wails at the end of the record, on “Take It With Me”—both beguiling titles for mesmerising music that seems to sizzle or glisten, depending on whether the music appeals as something that evokes a caravanserai at noon traversing the dreaded route from Mali to Timbuktu, or whether the music is felt in the cracks and whiplash-like chill of Antarctica. And even though the drummer Jeff Hirshfield creates a logical pulse around the charts, either guitarist Ben Monder or the strings players will inform the music with such an elastic form that lines will echo ad infinitum, creating not a double helix of contrapuntal lines, but a wave form of indeterminate crests and troughs.

Riding this wave, with considerable virtuosity and superb control is the main protagonist, trumpeter Taylor Haskins. While Mr. Haskins appears to be a considerable intellect, he is also a musician, who feels the music of his creations with body and soul—and not simply in a cerebral manner. His manner is to blow his trumpet in a brazen manner, using few if any mutes, yet creating a softness that is reminiscent of Clark Terry and Miles Davis, However the trumpeter has a singular voice and makes surprising twists and turns in the long, loping lines that he shares with the stellar guitarist, Ben Monder. Mr. Haskins also plays with abject humility and eschews the sardonicism of Miles Davis and the puckishness of Mr. Terry. Instead his music burns with fiery control and weaves and pierces the musical tapestry creating as much warp as it does weft. So in a sense Mr. Haskins works his horn as if he was creating fantastic tapestries that tall timeless stories and are awash with gorgeous colours that are both warm and cool and, above all, absolutely beguiling. Mr. Haskins also plays this ethereal music with flawlessness and astounding fluidity. The trumpeter is aided and abetted by the remarkable guitarist, Ben Monder, who plays his instrument as if it were bowed con arco when it is actually played pizzicato. Thus the guitarist also plays with a palette that appears to create viscous warmth in the colours he uses.

It would be remiss not to mention the bassist, Kermit Driscoll, who—however reticent he may sound—is actually an important member of the ensemble and creates the most beautiful counterpoint with the ineffable Mr. Monder. But make no mistake this is a trumpeter’s record and it remains one of the finest examples of ethereal playing in a long time.

Taylor Haskins is being hailed as one of the most original new voices on the trumpet today. Downbeat magazine declared him one of ’25 Trumpets for the Future’, stating that Taylor displays “a probing, adroit lyricism and a gift for complex, imaginative composition.”

Taylor has performed and toured with a wide variety of groups over the past 20+ years; he currently performs and records with Guillermo Klein’s ‘Los Guachos’, the Dave Holland Big Band (with whom he won a Grammy™ award in 2005), the Alan Ferber Expanded Ensemble, the JC Sanford Orchestra, Jamie Baum’s Septet+ and the Joel Harrison 19, amongst others. Taylor holds a Bachelor’s degree in music performance (UNH, 1993) as well as a Master’s degree in music performance & composition (Manhattan School of Music, 1996).

To date, he has released four recordings of his compositions under his name: “Wake Up Call” (Fresh Sound), “Metaview” (Fresh Sound), “American Dream” (Sunnyside), and most recently “Recombination” (Nineteen-Eight). Two new projects will be released in 2014, the first of which will be “Fuzzy Logic” on Sunnyside Records. This is a recording of mostly original chamber-ballads that adds a string trio to Taylor’s quartet.

In addition to his own recording projects Taylor has been composing music for media for over 15 years, and in the process he has scored dozens of national commercials and has contributed music to major motion pictures. Taylor worked for the cutting-edge music production studio tomandandy™ for nearly 6 years composing music for everything from television commercials to films, art installations and fashion shows, as well as helping to develop proprietary music software that implemented artificial intelligence-based technology, and which eventually received a U.S. patent.

Originally hailing from New Hampshire and having lived in New York City for 20 years, Taylor now resides in the Champlain valley region of upstate New York.