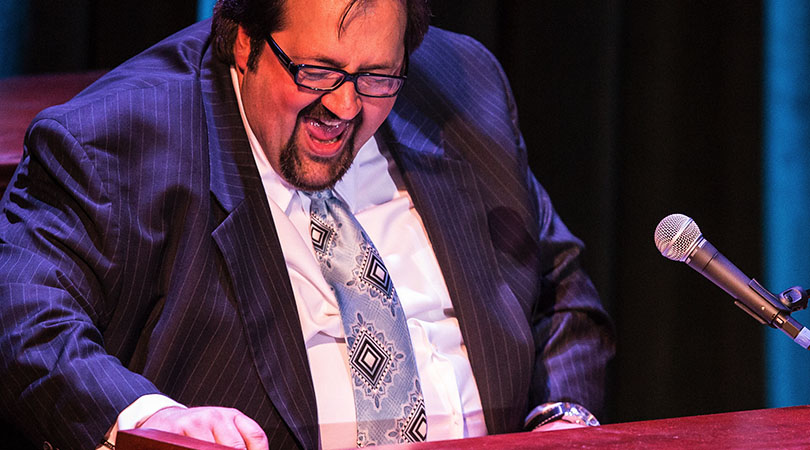 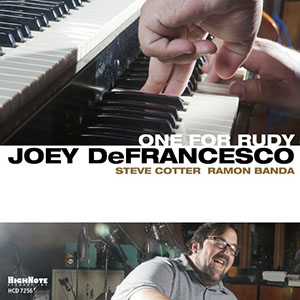 Listening to Joey DeFrancesco can be a thrill; although it can sometimes be a little trying as well. Trying because he sometimes gets so carried away with his own virtuosity that he tends to overplay his hand—his right hand, to be precise—with which he might tend to play one too many notes, almost undoing his own beautiful soli. On this album One for Rudy his virtuosity almost comes apart on the majestic Freddie Hubbard standard, “Up Jumped Spring,” a song on which he gets much too swept away and begins to play a series of florid arpeggios; and once he starts he just cannot stop himself and almost tears apart his own solo. Mr. DeFrancesco does set things right in the end by letting good sense prevail and does pull off a rather exquisite version of the song in the end. But it seems that he just cannot resist some over-the-top harmonising when he loses himself in the music. So why is Joey DeFrancesco still a thrill? Well, with his foibles on this album, he is still one of the finest Hammond B3 players on this planet. And here is why: Mr. DeFrancesco has impeccable taste. Consider the same “Up Jumped Spring”: His opening arpeggios separated by intervallic minors; or minor variations is breathtaking to listen to. The manner in which he paces himself in that opening, varying the pulse as he dallies over some notes and lets his hands rustle over others is also quite beautiful. Then there is the exquisite emotional element of the song: Few organists—indeed few pianists—can make the listener gasp and cry and jump for joy as Joey DeFrancesco can and he does so on this song. It is truly a pity that the excellent solo comes apart when he turns to the arpeggios in the middle section of the solo. However, by the time he comps softly behind the drum solo of Ramon Banda, all is forgotten.

All is forgotten also because of the spectacular version of “Stardust,” which Mr. DeFrancesco plays with some histrionics and voluminous and viscous notes, letting them slide off his Hammond B3. This is possibly the best chart on the album; it is slow, elementally melancholic and despite being somewhat sad, it induces a beautiful reverie in the listener, despite being awakened by the yell of the notes as Mr. DeFrancesco chops out his amazingly beautiful solo. “Goodbye” is also played in a similar vein, with beautiful and dense clusters of notes; making the emotion of the song so hard to take as some of those notes pierce the heart. Perhaps it is the slow sentimentality of some of his music drives Mr. DeFrancesco to distraction. But there is plenty of redemption on this album. “I Don’t Wanna Be Kissed” is beautifully played; the Miles Davis and Bud Powell chart, “Budo” is played with astounding flair. His take on “Monk’s Dream” is even better. Here Mr. DeFrancesco seems to have the essence of the song, a blues, which is played with wondrous slashing notes that imitate the angularity of Thelonious Monk’s original. He also performs exceptionally on “Way Out West,” but once again his penchant for too many notes almost makes the song come undone. But soon better sense prevails and this chart also comes out a winner.

With all its shortcomings and showboating, Joey DeFrancesco still manages to make this album swing and just as well. He is paying homage here to one of the finest engineers to grace the other side of a recording studio, Rudy Van Gelder. And Mr. DeFrancesco does do so in the grand manner with One For Rudy both the album and the chart as well.

Joey DeFrancesco comes from a musical family. His Grandfather Joseph DeFrancesco (his name sake) was a reed man. And of course his father “Papa” John DeFrancesco is a fine jazz organist in his own right. At the age of 4 Joey began taking a strong interest in the organ. By the time he was five, he was playing Jimmy Smith songs verbatim. As the years went on his interest and love for the organ and music grew stronger.

From the ages of 5-10 his father would bring him to his own gigs and let him sit in. At 10 years of age he began to play in a Band in Philadelphia, which featured legendary players Hank Mobley on Tenor Saxophone, and “Philly” Joe Jones on the Drums. At 16 he signed an exclusive recording contract with Columbia Records, releasing his first record “All Of Me” at 17. This record was single handedly responsible for the great resurgence of the Hammond sound in popular music. Also in his 17th year he was called on by the great Miles Davis to join his band, and toured all over Europe. It was at that time that Joey, inspired by Miles’s sound, picked up the trumpet & started playing. To this day, Joey continues to play the trumpet, very similar to the style of Miles. At 18, Joey began touring with his own quartet. At 22, John McLaughlin called him along with drummer Dennis Chambers, to form the group the “Free Spirits”.

This band toured extensively for 4 years. Joey has been around the world and back dozens of times with his own trio, but also playing and recording with some of the greatest musicians in the world such as, Ray Charles, Bette Midler, David Sanborn, Arturo Sandoval, Frank Wess, Benny Golson, James Moody, Steve Gadd, Elvin Jones, Jimmy Cobb, George Benson, John Scofield, Joe Lovano, and many more. He has won the Down Beat Critics and Readers poll ever year since 2002, as well as Jazz Journalist award, and countless others. In 2004 Joey was nominated for a Grammy for his record “Falling In Love Again”, and again in 2010 for his release titled “Never Can Say Goodbye”. Currently, Joey continues to tour with his own group, and tours with David Sanborn. Joey has played a key role in the development of his signature model organ, called Numa, by Studiologic.