We hear so many trios these days and their music – pedestrian at best – has resulted in us running the risk of missing a truly important – even great – one when it comes along. But thanks to John Zorn and Tzadik, there’s not much danger of the Sylvie Courvoisier Trio receding from our memory. Not for a long, long time to come. Clearly this trio is not like other musical triumvirates since the power-trios of the past and I mean Bill Evans, Paul Bley et al. Its sinuous connection of the distance between brain and fingers makes the inner machinations of three brilliant musicians work as perfectly a sort of unified central nervous system. The musical blitzkrieg that ensues is quite breathtaking. 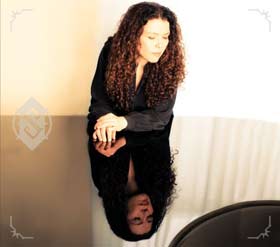 So perhaps the wait (for the next BIG trio) has been worth it after all because the one-to-a-part performances by Sylvie Courvoisier, Drew Gress and Kenny Wollesen have the heat to make your blood run faster. I don’t mean heat of the hard-driven kind, so often encountered today; on the contrary line is always respected, tempos are up there with pace – no matter how many rhythmic changes there may be in a given space – but never over-pushed, and the instruments are allowed to speak now with energy and excitement, now with warmth and humanity. There is plenty of detail, but it is natural and never fussy and the ornamentation is always clever, sometimes humorous, often delightful.

Add to that technical excellence. The exactness with which the three musicians articulate their respective semiquaver and demisemiquaver, their chord groups and imaginative couplings and soli – in each of the nine extraordinary compositions by Sylvie Courvoisier is nothing short of masterful. I mean listen to the scurrying magnificence in the chopped rhythms of “Double Windsor” or the mischievous humor of “The Charlier Cut” and “Inscordatura” or the tender whimsy of “Pendulum” and the jaw-dropping twists and turns of “Downward Dog”… and you have the ingredients of something memorable.

What really shoots this recording to the top of the pile, however, is the sheer joy of it, the spontaneity and the tireless, surging musical energy of its many sudden feints and sallies. How grippingly, for instance, the tension climbs in the often rather polite “Double Windsor”, how liltingly the off-beat theorbo strums add springy definition when you least expect them; and how invigoratingly the taut energy of the notes in “To Fly To Steal” release a glorious chain of suspensions, and the witty interplay of the final bars spills over into a final-note twiddle that is pure natural exuberance.

Such things are what we have come to expect from Ms. Courvoisier, of course, but in these pieces her musical personality finds a home so congenial that it simply bursts through the speakers. Much of this has to do with the extraordinary relationships she enjoys with Drew Gress and Kenny Wollesen. Not that it is all uniform bonhomie. We see this immediately in “Double Windsor” with a slow movement of concentrated stillness and lyrical beauty and a gently coaxed finale that one could even consider as deliberately distanced, while in “Corto” with its delicate dynamics, relaxed tempos and free-spirited attitude to rubato, likewise creates a winsome expressive world of its own.

There is no doubt that Sylvie Courvoisier has the ability to empower the minds and bodies of the rest of the two musicians around her. Granted they are her peers too and the result is performances with a wonderful sense of mutual fun and team-play. This really has been the hallmark of all of the great trios of the past in all of their recordings and though they still stand up well today they are easily surpassed by the rich and free-flowing musicianship of this exhilarating release. Perhaps that can be ascribed to the unbridled genius and evolution of musicianship of the three musicians in question here, but another factor is that there is no more inspirational musician working today than Ms. Courvoisier, in whose company surely no piano could sleep in hands of such excellence.

Sylvie Courvoisier is a pianist, composer and improviser. Born in Lausanne, Switzerland, Courvoisier moved to New York in 1998 and has lived in Brooklyn since that time. Courvoisier has led several groups over the years and has recorded over 25 records as a leader or co-leader for different labels, notably ECM , Tzadik and Intakt Records and 30 cds as a sideperson. Read more…
See more by photographer Frank Schindelbeck…