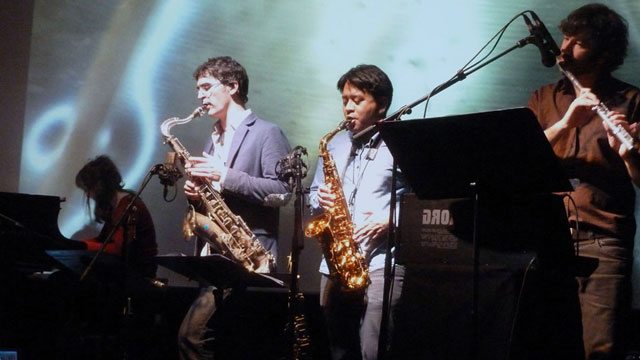 Here we have something very special, and a good deal more than “just another” Moondog. What or who am I speaking of? For the uninitiated—and I too was one once upon a time—Moondog, born Louis Thomas Hardin—was an American composer, musician, poet and inventor of several musical instruments. He was blind from the age of 16. In New York from the late 1940s until he left in 1972, he could often be found on 6th Avenue between 52nd and 55th Street wearing a cloak and Viking-style helmet, sometimes busking or selling music, but often just standing silent and still. He was widely recognized as “the Viking of 6th Avenue” by thousands of passersby and residents who had no idea that this seemingly homeless eccentric standing on “Moondog’s corner” was a respected and recorded composer and musician. He grew up, playing drums early in his childhood, moved to Batesville, Arkansas where he lived until 1942, when he got a scholarship to study in Memphis, Tennessee. Although the majority of his musical training was self-taught by ear, he learned some music theory from books in braille there. Hardin moved to New York in 1943, where he met noted classical music luminaries such as Leonard Bernstein and Arturo Toscanini, as well as legendary jazz performer-composers such as Charlie Parker and Benny Goodman, whose upbeat tempos and often humorous compositions would influence Hardin’s later work. One of his early street posts was near the famed 52nd Street nightclub strip, and he was well-known to many jazz musicians and fans. 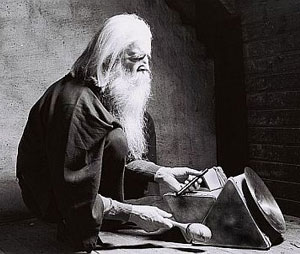 It was 70 years ago that Moondog began to inhabit the New York streets and hit clubs and dives where jazz was heralded as The Music, as well as the hallowed halls of symphonic orchestras. It was at the latter that he wrote music, which at first blush appeared to be like Erik Satie’s, but was more melodious, less repetitive. Moondog’s music took inspiration from street sounds, such as the subway or a foghorn. It was characterized by what he called “snaketime” and described as “a slithery rhythm, in times that are not ordinary… I’m not gonna die in 4/4 time”. Many of his works were highly contrapuntal, and he worked hard on perfecting his counterpoint, criticizing Bach for his many “mistakes”. Far from being debunked as an eccentric hobo, Moondog’s music was well respected by the cognoscenti and recorded albeit rarely from the 40’s to 1989. All of his music was transferred to braille by his dedicated student and archivist Ilona Sommer. And now along comes Sylvain Rifflet and Jon Irabagon to revive what would most certainly have been lost in the libraries of Westphalia. Perpetual Motion is more than Moondog reportage, It is a towering masterpiece or as the title of the disc puts it: A Celebration of Moondog. The music has all of the candour, intensity and drama of Moondog’s journey. It has been worked through from there, consolidating a love that would deepen as the project came to fruition in 2014. 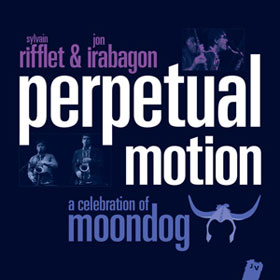 Dialogue in sound, from start to finish… that’s what these memorable performances are about. Time and time again, on both CD and DVD you can freshly appreciate how one instrumental wonder takes its cue from another; how what you could never have imagined is suddenly and exquisitely brought to life with deep sensitivity and meaning. Why? Probably because Sylvain Rifflet and Jon Irabagon, leaders of this small ensemble. The style here takes warmth and rhythmic solidity as starting points much as Moondog himself did on his regular haunt of the New York Street and also on the recordings he made for some major labels. Note the rocking saxophones of Mr. Rifflet and Mr. Irabagon in the profoundly beautiful “Heat On The Heather” and the gutsy attack of the saxophonists’ in “Aska Me”. Not for him the anxious aggressive interpretations; the discs are all the better for the elegiac oration, oppressively dark, though fairly transparent. All of the music is played with pomp and circumstance and in its reticence the music sounds absolutely superb.

The music is scored for two saxophones, guitars, flutes, piano and percussion and treated metals. It emphasises the eccentric side of the composer. In the 14 movements is music that works its way from the cool of ”Oasis” to the mysterious “Black Hole”, the fleeting gentleness of “My Tiny Butterfly” and the progressive angularity of “From The Jazz Boom No 2” and “From The Jazz Book Extended”. Its quirky character resurfaces in one of Moondog’s most bizarre creations – ““Nero’s Expedition” – the brief interlude in which each instrumentalist takes on the archetype, such as composers who played in the so-called Avant garde movement. The DVD has some priceless footage of Moondog himself and interviews with Saul Smaizys who, it appears, was one of the few people to send time with the composer in his elemental state on the streets of New York. And then there is the footage of the music especially that which includes the children’s choirs. Being virtually live not every detail is perfect, but it will take a very critical ear and eye to notice what isn’t. Under Mr. Rifflet’s direction the finale’s hymn-like opening is beautifully played, the colossal final climax overwhelmingly, the quiet close held as if on a single breath. Both Mr. Rifflet and Mr. Irabagon are inspired by each other to give off their best. The rest of the ensemble is likewise, inspired to give off theirs too Camera direction takes a predictable route of centering on prominent instrumentalists, though never to the point of eccentricity, and the sound quality is excellent. All in all, an exceptional production.

French musician living in Paris, my main instruments are tenor saxophone and clarinet. I also play flutes and toy instruments such as music box, toy piano and metalophone. I studied saxophone with Pascal Dupont, Michel Goldberg and Philippe Portejoie. Graduated from Paris conservatory I’ve played in many French and European big-bands: Le Gros Cube (Alban Darche), Le Sacre du Tympan (Fred Pallem), Pandemonium (F. Jeanneau) etc … As a sideman I performed with musicians such as Riccardo Del Fra, Michel Portal, Aldo Romano, Kenny Wheeler, Didier Levallet, Joey Baron… Between 2002 and 2011 I lead French band called Rockingchair. In 2007, we received a « Django d’or » and several other awards for our first album. The second album of the band called 1:1 was released in 2010 on German label Enja. Read more…