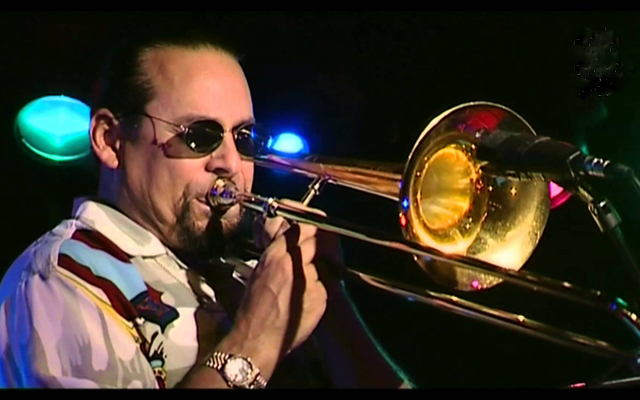 Steve Turre may well qualify to be the ‘Renaissance Man’ of the trombone. His breadth of knowledge of the instrument’s history coupled with his deep and emotional connection with Jazz, and his incredibly pure bloodline – a lineage that includes JJ Johnson, among other masters – make him a keeper of the proverbial flame, as it were. Over the years his compositions have reflected his technical ability as well as an innate passion and have come to be recognised as important resources for the language and literature of the trombone. On Colors for the Masters he not only worships at the altar of his musical ancestors, but also goes well beneath the surface of music by JJ Johnson, Thelonious Monk, Wayne Shorter and Antonio Carlos Jobim, and, of course, his own meticulously-crafted originals. 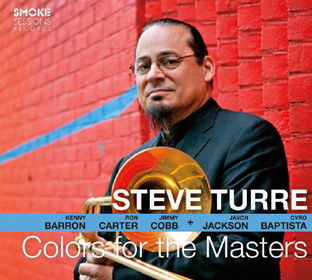 In doing just so, Steve Turre plumbs the depths of his own genius, showing off not only his chops but their expressive skills. However, it is also fair to say that his voice is a glowing work-in-progress, highlighted by a flowing liquidity whose bright timbre often veers into the playful, the tender and the darker aspects of his instrument. These qualities – all of them – are especially suited to music of fresh and lively sentiment as typified by the songs on this disc. Anyone listening to this performance, for instance, is hard-pressed to find a better interpreter of the ballad as he does on ‘Quietude’. Similarly could there be a better trombone versions of Wayne Shorter’s ‘United’, or Thelonious Monk’s ‘Reflections’, or for that matter, of his mentor, JJ Johnson’s ‘Coffee Pot’? There is no need to answer this rhetorical question.

Turre does not shine a spotlight on that other instrument – or battery of instruments – that he is the master of: sea shells. But he does so on Antonio Carlos Jobim’s ‘Corcovado’. The 7 minutes and 18 seconds bristle with Turre’s hip energy and feature extraordinary instrumental sound combinations such as honking and elemental howling buttressed by the sweltering tone of his trombone, Ron Carter’s dark bass, Jimmy Cobb’s thundering drums and the twinkling, radiant percussion of Cyro Baptista. These musicians are very much reference points for album, with the growing giant of the saxophone, Javon Jackson on four tracks to complete this extraordinary performance.

The title track which has the heart grabbing melodies and technical sound to become an overnight hit is Steve Turre’s way of giving thanks to all those who came before him – including this bassist, pianist and drummer. Throughout, the musical experience is engrossing, lively and provocative. But it is also tremendously entertaining. Todd Barkan’s detailed liner-notes provide context without detracting from the musical impact.