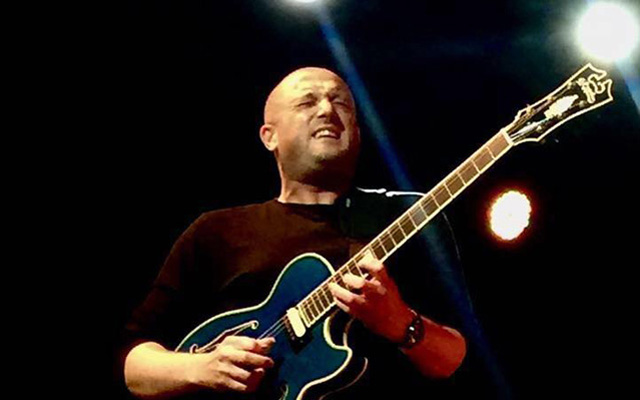 Fabrizio Sotti’s life-affirming celebration of the guitar and music made on it is memorably captured on this disc Forty. To stretch a point even further, the recording of (mostly) Sotti’s music is a feast for performer and listener alike. The Italian-born improviser writes in a style that is at once accessible and piquant, clearly structured yet full of fantasy. Fabrizio Sotti has an uncommon knack for moulding works of vital expressive content. 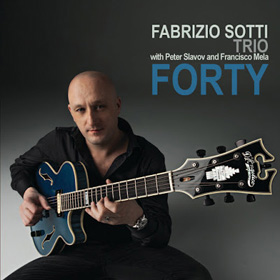 The repertoire – nine of the ten songs on this record – appears to be fairly recent revealing Sotti’s debts to previous masters but also his distinctive way of rendering material in his own singular way. Titles don’t even begin to describe the wonderfully angular music. ‘Dangerous Walk’, for instance, far from being full of foreboding is in fact a score of vibrant design whose rhythmic vivacity and thematic unfoldings are matched by an atmospheric sense of sonority. ‘Beginning Now’ is a skilful, swinging piece that is quite interestingly complex and challenges the dexterity and control of its interpreters. ‘Thalia’ a ballad written for Sotti’s daughter is the epitome of a ‘heart-song’. ‘How Insensitive’, the only song not written by Sotti lives up to its title in the way the thematic images evolve throughout the score.

The guitarist’s music requires the services of artists who can tame formidable technical beasts and bring colourful delineation to a multiplicity of moods and textures. Bassist Peter Slavov and drummer Francisco Mela are just such musicians. Their performances are crisply articulate, rich in contrasting hues and attentive to the panoply of significant gestures that make Fabrizio Sotti a composer of notable inventiveness and magnetism. Add that to the fact that he is a young guitar master on his way to a rarefied realm and you have quite a musical find.

Track List: Redemption; Dangerous Walk; Is That What You Think? Beginning Now; How Insensitive; Thalia; So Far So Close; Forty; Into to The Bridge; The Bridge.