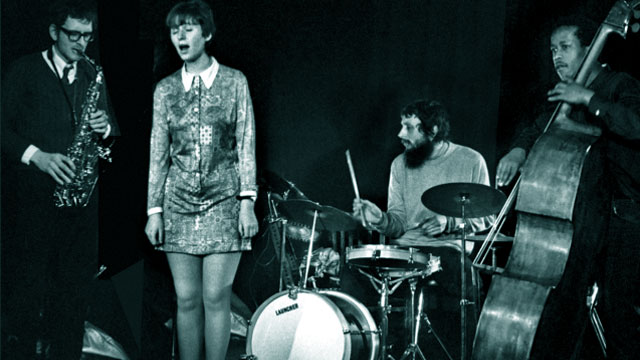 The ethereal beauty of this recording combined with the unbridled ingenuity of the improvisations contained within, are two of the most important reasons why they have not only survived, but also why they are still relevant today. The music seems to come from another place or places, depending on whether their spiritual-ness is a factor; but more likely from that quintessential fifth dimension. Clearly, the voices of Pepi Lemer, Maggie Nichols, Carolann Nicholls and the ineffable Norma Winstone make this happen. But it will not pay to stop there. Consider the harmonics of the reeds and winds. Their long and elliptical lines loop like parabolas around the voices criss-crossing the vocalastics in multiple dimensions giving the impression that the music actually forms a sort of weightless and moving ovoid around the melody. There is also the strong affinity with Webern as well as its Stravinsky-like atonality, dissonance and odd metres. Admittedly much music that came after Stravinsky and then Webern could not escape their sphere of influence. However the musicians on this record have a clear understanding of time and place and, while under the influence of, they display remarkably original voices. This accounts for the breathtaking nature of the music and listening to it gives the impression that the likeness of it has never been experienced before. Moreover, with every hearing the music grows exponentially upon the listener, who hears something different each time until it is almost unbearably exciting.

The remarkable musicianship of the vocalists is matched by the playing of the other musicians—drummer John Stevens, pianist Peter Lemer and the electric guitarist Derek Bailey. Saxophonist and piccolo player Trevor Watts seems to have an almost surreal epiphany as he falls in line with the formless vocals. On the first “Familie” saxophonist Evan Parker and flutist Brian Smith sound as notionally light; even weightless as a the proverbial feather. The dynamics of the group is defined by the approach to harmony. This magnificent collectivism of the music—for that is the only way it can be described for now—is inspired. There is a Zen-like stasis that defines the response of the musicians to time. The extraordinary musical worship of harmony that swirls around the melody is sometimes heraldic, sometimes mystical and always magical. “Oliv I and II” are both exemplary and show how musicians could circumnavigate convention and yet remain familiar in the sense that they can be understood and appreciated in the ordinary scheme of things. Even masterful and sometimes rarefied schematics in the music become touchstones for the listener in a manner that is far from being obscure and yet is original and innovative. The incorporation of wailing and howling like the wind as well as the wonderfully faraway sounds of the stuttering arrhythmia of John Stevens’ drums is a good example of this kind of playing.

Here is another record by the label EMANEM that confirms the belief that smaller entities are preserving the history of music in a more relevant manner. Their dogged pursuit of originality and musical excellence is bereft of commercialism. It is unlikely that this is a profitable business, but any venture that makes available music so wonderful deserves unstinting support from even the most unlikely listeners.

About the Spontaneous Music Ensemble

The Spontaneous Music Ensemble (SME) was a loose collection of free improvising musicians convened beginning in the mid-1960s by the late South London-based jazz drummer/trumpeter John Stevens and alto and soprano saxophonist Trevor Watts. SME performances and recordings could range from Stevens-Watts duos to gatherings of more than a dozen players. As critic Brian Olewnick writes, the SME emphasised an “extremely open, leaderless aspect where a premium was placed on careful and considered listening on the part of the musicians. Saxophonist Evan Parker observed that Stevens had two basic rules: (1) If you can’t hear another musician, you’re playing too loud, and (2) if the music you’re producing doesn’t regularly relate to what you’re hearing others create, why be in the group? This led to the development of what would jocularly become known as ‘insect improv’ — music that tended to be very quiet, very intense, arrhythmic, and by and large atonal… Read more…