Home Music Sons of Kemet: Black to the Future

The music of the Sons of Kemet belongs to and is evocative of the revival of Africanism [an acknowledgement of the works of Cheikh Anta Diop] syncretized into a radical, vivid and life affirming Hermitism born of griot music. The repertoire of Black to the future is both a condemnation of neo-colonialism that is tearing humanity apart and a celebration of the power of music to prevent that very outcome. This celebration is led by the woodwinds master Shabaka Hutchings, a kind of musical leader who seems to embody virtues that are inspirationally Pharoah-like and Homeric in the kind of epic nature of his compositions and the majesty of his playing each of the instruments in his repertory. 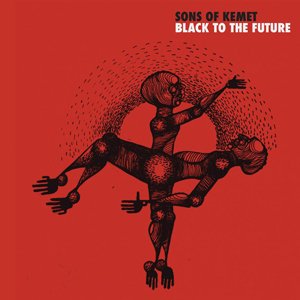 The hypnotic nature of the music is like an ancient call to prayer; a healing wrought in the steady rhythmic splendour of rap narratives and poetry that melt into a volcanic mix instrumentation that sets the music aflame. A kind of slow fire is lit by the opening “Field Negus”, a kind of communal partaking of the ceremonial drink that gradually winds up to such An extent that by the time it ends the music leaves listeners in a kind of ecstatic intoxication that swirls in dervish-like harmonies and rhythms. The song is a call to honouring human history by lifting the “burning cross” never forgetting our common African source.

Mr Hutchings leads his musical cohort with sinuous melodies and harmonic conceptions that are formed as if by a Divine breath, with tone-textures that float in searing heat waves over the rhythmic foundation created by the monumental thunder of two drummers and the elemental growling of the tuba. Vocalastic poetry from several singers collides with a mélange of hot and rippling melodies and harmonies. All of this gives the eleven tracks – that culminate in the climax of “Black” – a magnetic kind of broodingly percussive tumbling grooves held together by the funkified rhythms evocative of the Afro-Caribbean musical diaspora.

Throughout it all, Mr Hutchings continues to ring in the changes in mood, structure and tempo, making for a riveting programme that culminated in its apogee: “Black”. The considerable degree of balance and integration of melody, harmony and rhythm, of composition and improvisation, of exploration, fierce individuality and tradition is brilliantly maintained through this recording which is to die for…