Shirley Crabbe is a remarkably-gifted vocalist. Her agile, luminous voice is ideal for this kind of Romantic and Gospel fare – some of which she has written herself – and she sings with power and great subtlety, superbly matched by musicians from pianist Donald Vega, David Budman, bassist Clovis Nicholas, drummers Ulysses Owens Jr., Alvester Garnett, trumpeter Brandon Lee and the strings quartet of Chris Cardona, Sean Carney, Todd Low and Stephanie Cummins.

Miss Crabbe is at her best when she wrings the poetic imagery out of songs and the best of these is Milton Nascimento’s classic “Bridges” with its expressions of longing, hope and joy, a song that has inspired many singers, but none who capture its delicacy with such exquisite tracery as Miss Crabbe. The Brasilian composer’s sense of saudade is perfectly captured in Miss Crabbe’s extraordinarily perfumed version that soars into a rarefied realm. 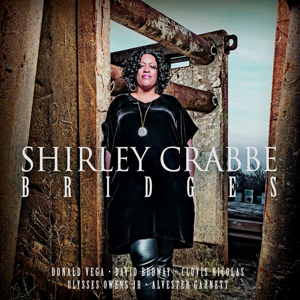 Mr Vega – musical director on this date – is not far behind. The pianist’s ingenious accompaniment here and elsewhere makes him an equal partner in all of the music on which he appears.

On other music Miss Crabbe is equally wonderful. Her highly expressive approach to music – clearly coming from the Gospel setting – enables her to dig deeper than most vocalists. As a result even songs such as “I Didn’t Know What Time It Was”, for instance, becomes something wholly her own because Miss Crabbe elongate syllables and alters accents creating vocalastics that become fumaroles of sound, while dissonance, chromaticism and striking harmonic shifts paint the plaintive texts afresh – here ably assisted by Brandon Lee and the high and lonesome sound of his trumpet. Mr Vega’s moments of austere scoring on music such as “Promise Me” and its silences, together with Miss Crabbe’s unique colourations highlight the underlying theme of romantic solitude.

Throughout this wonderful disc Miss Crabbe displays the pliancy and expansive range necessary for these intricate song settings with their two-octave breadth, though her voluptuous contralto is far more sensual than chaste. David Budman’s sensitive accompaniment on “Thief in the Night” is a spectacular addition to the song. But he is not alone in making significant contributions here. Bassist Clovis Nicolas is the perfect rhythmic mirror for all of the music as are Ulysses Owens Jr and the Alvester Garnett, who once did likewise for the greatest of them all: Abbey Lincoln. Miss Crabbe is also sensitively accompanied by the strings players who reflect the abject mood of the pieces they are in. Not surprisingly the disc is absolutely one to die for…