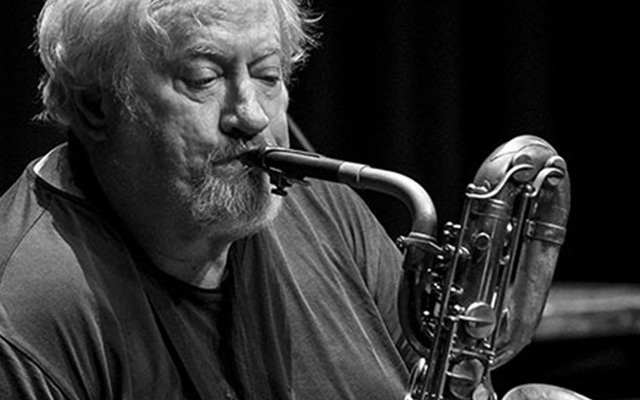 Ordinarily one would handle another disc with an “organ trio+1” with an air of resignation (even trepidation) because the configuration is fast becoming a rather tired format. However, nothing – no recording with baritone saxophonist Ronnie Cuber – must ever be construed as “ordinary”. With very good reason. For just as more musicians are taking up the heavyweight of the low woodwind horn finding one with a voice anywhere as distinctive is also becoming a rarity. Ronnie Cuber is an enormously gifted musician who just also happens to be the finest living baritone saxophonist active today. He is a musician in the one true tradition of great baritone saxophonists that boasts Hamiett Bluiett, as well as that Holy Trinity of Harry Carney, Cecil Payne, Pepper Adams but Mr Cuber has also long since shattered the glass ceiling of that Christian symbolism as well. 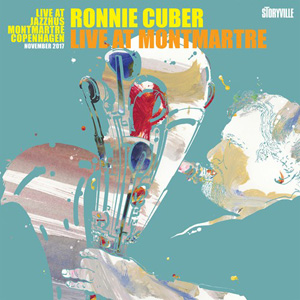 Mr Cuber made his recording debut as leader in 1976 with Cuber Libre! (Xanadu). However, he had paid his dues long before that, playing with George Benson and recording with him and Lonnie Smith in the late 1960’s. En route to his own date as leader he also played and recorded with Maynard Ferguson and later with BB King, Paul Simon, Eric Clapton, Frank Zappa, Eddie Palmieri, Charles Mingus’ last band and, today, with the Mingus Big Band – in addition to playing with everyone who is anyone in music in Europe. The fact that Mr Cuber has so diverse a discography suggests not only that he is one of the most in-demand baritone saxophonists but rather that he can play any music and handle any idiom and he has proven this time and time again…and he does so on Live at Montmartre.

Well, actually he does not simply prove how the baritone saxophone is meant to be played in Jazz, he is a living walking, playing master-class every time he puts the reed and mouthpiece of his horn to his lips. His grizzled tone is gloriously warm and every note and phrase emerges dipped in honey. But sweet as he sounds he always shows he means business. The music played in bebop mode is proof. Only Charlie Parker sounds better on “Cherokee” than Ronnie Cuber and that’s because he invented the song (or re-invented if you are one of those refusniks who is less believing of the Zeus of Music). And again, only Bird could have played “Just Friends” and “Au Privave” better because they were his songs. These three songs on Live at Montmartre are new palimpsests for bebop and there is no one (after both Bird and Phil Woods have died) who can play a song fast and with so much eloquent emotion.

Mr Cuber is the quintessential artist and there may be many who are after perfection just like him, but for no he occupies the high ground. There is nothing that anyone can do to usurp that throne – for now – because no one can play like Ronnie Cuber. He is a complete pro with a singular voice. Not for him relentless torrents of notes, honking riffs, biting attack; his trademark is his rasping “round sound”, lithe and elegant as well as warm and swinging, plus the tantalising asymmetry of his lines, which set off in wrong-footing directions and unexpected turnarounds, but always land exactly right, with their own fascinating rhythm. Happily (or sadly) he seems to find the best company in Europe these days. Which is exactly why in the company of the masterful Hammond organist Kjeld Lauritsen, guitarist Krister Jonsson and drummer Andreas Svendsen this “organ trio+1” recording has turned out to be something to die for …