Scott Robinson and Julian Thayer would not be the first artists to ponder the immensity of the universe, nor would they be the first to turn this magnificent obsession to music. Musicians from Gustav Holst and Alan Hovhaness to Sun Ra and George Clinton have done so in the past but the multi instrumentalists appear to be one of a kind in that peering at the enormity of Creation they have constructed an intuitive series of improvisations with symphonic heft. In doing so, these two musicians present a view the Great Beyond with the intensity of a child’s eye. There is no attempt at expressly spiritual music, although I suppose that you cannot help being spiritual when in dialogue with a silent God. But the silence of the universe or, at least its sound of silence, enables the musicians to create a triangular contrapuntal dialogue that is vital, red-blooded and technically spectacular. 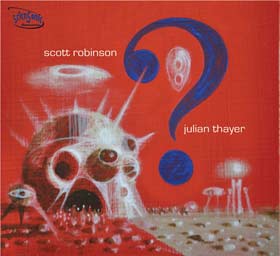 This complete set of music reveals that Scott Robinson and Julian Thayer have glorified not merely the subject of their discourse, but also play strange instruments in a particularly wonderful manner. The music is played employing full-bodied, communicative tone colours, textures and instrumental timbres each designed to be a sort of key to unlocking the mysteries before them. Instrumentation is sinuous, sometimes threadbare and emasculated and rightfully so. How else would an artist, so lowly in the general scheme of these enormous, unending vistas, sound on earth or in the endless heavens. It’s an ambitious dialogue throughout. Each movement shows how well the music unfolds when nestled with the accompanying instruments; the blending and offsetting of timbres – crystalline at times but always with real warmth – is just about perfect. Each movement has its own beauty; one is self-conscious, however the next might give way entirely to intoxication.

? frames – well – questions in daring instrumental linguistics. These will never fail to both mystify (naturally) and delight with endless surprise even when movements might seem to be suffused with loneliness, sadness and consolation and that too in a most lovely way. All sounds, recorded in Scott Robinson’s NJ studios are magical. I also find the minimal notes deeply affecting and appropriate as they point you in a general direction, leaving the music to beguile and attract you by the sheer pure sound of the notes played. Not surprisingly the sound is wondrous in its own right, made as it is by a plethora of instruments some so impossible to name but equally quiet enjoyable to listen to and it also bears mention that the cover art is an apt visual equivalent to the music of Scott Robinson and Julian Thayer.

Unlike other modern symphonic works, this one tweaks traditional structures – although more often than not, avoiding them altogether. One thing missing might be the human voice, but that might be deliberate as it might have called attention to liturgical traditions. This also keeps the music in the contemporary realm in a most dramatic way.

One of today’s most wide-ranging instrumentalists, Scott Robinson has been heard on tenor sax with Buck Clayton’s band, on trumpet with Lionel Hampton’s quintet, on alto clarinet with Paquito D’Rivera’s clarinet quartet, and on bass sax with the New York City Opera. On these and other instruments including theremin and ophicleide, he has been heard with a cross-section of jazz’s greats representing nearly every imaginable style of the music, from Braff to Braxton. Read more…