Home Music Satoko Fujii Orchestra New York: Fukushima
It was difficult to watch as the nuclear disaster at Fukushima Daiichi unfolded after an earthquake hit the Fukushima Prefecture, initiated primarily by the tsunami following the Tōhoku earthquake on 11 March 2011. And it is appropriately horrific to relive the momentous event in the visceral energy of this disc: Fukushima by an ensemble led by the incredible Satoko Fujii. The sense of horror is ignited by the breathtaking music as well as by the long near-silences during which all you hear is what sounds like laboured breathing, footsteps and ghostly groaning which feels, right from the opening section of the piece, the dead have come to remind us – the living – that once again with all of its science, human beings had failed their own species.

The Fukushima disaster was the Hiroshima and Nagasaki of our time. The irony was probably not lost on Satoko Fujii, as she directed the opening moments of the first section of the piece. Allowing the pregnant silence punctuated by suggestions of strained breathing followed by what sounds like hyperpnoea and the gushing entry of the woodwinds, Miss Fujii beckons the tenor saxophone to take over. The elemental wail from the upper register that ensues is chilling and at the end of an interminable sequence the rest of the woodwinds follow with a mighty crescendo. 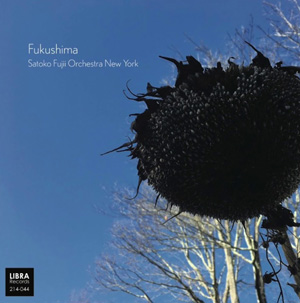 But volume without emotion would be vacuous and Miss Fujii and the musicians of Orchestra New York are ever-conscious of this as the leader directs the band into a hypnotic pace in long, gently rocking phrases as if to mimic a ghostly lullaby.

Once again, the music is launched with biting irony. And what follows is evocative of the aftermath of death, with its softly rolling funereal rhythms. Using the brass instruments to provide poignant accents to a fairly long – perhaps the longest – sequence on the recording is a master-stroke. The almost human, voice-like smearing by the trombones locked in a titanic struggle with the stabbing trumpets. Later the incessant twanging of the guitar and mournful blasts from the horn of Natsuki Tamura leads into a dissonant section made volatile by a screaming trombone and several trumpets intertwined with jangling guitar and thunderous drums until the whole ensemble, accompanied by a roaring bassline brings the sequence to boiling point punctuated, again, by a hypnotic two-chord figure before a long, fading instrumental sigh leads to a final haunting symphonic wail that brings to a close this truly magnificent piece.

Critical opinions may vary as to the position that this monumental work occupies in the overall oeuvre of Satoko Fujii. There is, after all, much to choose from and includes brilliant solo work, and equally brilliant duo work with her husband and long-term musical partner, Natsuki Tamura. There is also the music produced with several small, medium and large ensembles. Indeed Miss Fujii’s library of music is vast and extraordinarily breathtaking. But one would be hard-pressed not to acknowledge that Fukushima is the finest and most important work that she has ever created and performed.