Home Music Steve Lacy: free for a minute 1965-1972
The creative outlook of Steve Lacy was formed by his experiences of Dixieland, and then Thelonious Monk and Herbie Nichols, all of which he relocated to the highly personal landscape of the soprano saxophone. The irrepressible ‘rhythm’ of swing shaped his voice, even as it matured into the late Lacy one and at the same time even in his most daringly free improvisations ‘melody’ remained an important directive even when – as he played and invented music – only shards of melody were retained as pulse and harmony were all but suspended. These recordings, made between 1965 and 1972 are a fascinating account of that experiential journey and it is fascinating to listen to them in a kind of stream of consciousness as the music of Disposability, Free Fall, Sortie and The Rush & The Thing.

In all these works there are regular, often overt, references to traditional and other forms of Jazz before transcending to a viscerally exciting, free form music, often with a decidedly jazzy flavor, but recontextualised in Steve Lacy’s inimitably personal manner and often expressed in a complex rhythmic style in which conflicting layers of tempi are used to drive the music forward. As always, Mr Lacy’s music is beyond tonality and atonality, and beyond postmodernism. 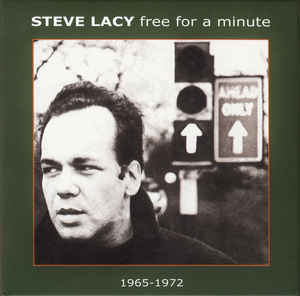 The ironic theatricalizing of the past is quite foreign to him. His sound world is utterly unique – as is magnificently expressed in his music for the soundtrack of Free Fall although the adventurous series of pieces on Disposability as well as that of Sortie and The Rush & The Thing complete the picture.

Although the driving force behind this music is the straight horn of Steve Lacy, its contemporaneity derives from its essentially rhythmic framework. This is true also when trumpeter Enrico Rava, vibraphonist (and pianist) Karl Berger, cellist Irène Aebi and alto saxophonist Steve Potts come into the picture (just as Roswell Rudd and his trombone did earlier on). Through their collisions with Mr Lacy on this music, the interaction with Kent Carter, Aldo Romano, Paul Motian and Noel McGhie the musicians deliver the works’ novel textures with consummate musicality, allowing its often obscure logic and strange beauty to emerge with compelling force across all of the works on these two discs.

To that extent, the music of Free Fall and of The Rush & The Thing are unique as Mr Lacy duels with Karl Berger and Enrico Rava on the surreal moments of the former, and with Steve Potts and Irene Aebi on the latter. Although one might – in moments of weakness and indulgence – lean towards a declaration of Free Fall being a particular favourite, it is impossible not to be drawn into the music of the other albums too.

Everywhere the musicians manage the technical and the polyphonic and polyrhythmic challenges with complete assurance bringing out a kaleidoscopic array of nuances and colour. Most riveting, of course, is the manner in which Steve Lacy uses overlapping tempi to conjure up a mistily impressionist veil of sound – a marvellous union of poetry and technique, at once beautifully evocative and utterly original.