Every once in a while a musician appears on your radar that leaves you at a loss to describe the wondrous manner in which his or her music affects you. However, the critic cannot shirk his responsibility to carry a torch for such a musician. I speak, of course, of Sari Kessler, a vocalist who illuminates music in a manner that few new vocalists do. Kessler expresses both the fragility and the force of vocal music through glinting, gauze-like textures and moments of clattering tumult and the joyousness of the blues, using it as the perfect springboard for the more jazzy elements of this album Do Right. Many albums by musicians unfamiliar to the critic often take some time to warm up to. The fiery beauty of this one, however, is immediate. Its incandescence is irresistible. 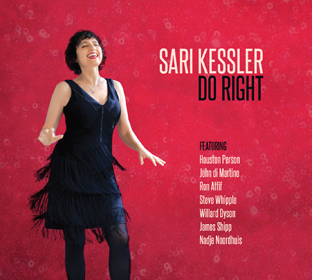 The poetic imagery of the songs that Kessler has chosen to sing on this album gives rise to some of the most hauntingly beautiful music. Her vocalastics are characterised by agility, luminosity as well as power and subtlety. As if that were not enough, Kessler is accompanied by some of the finest musicians; John di Martino on piano, Ron Affif on guitar, Steve Whipple on bass and Willard Dyson on drums. These gentlemen form the core of the group. Each musician is exquisite in his own right. However, it would seem that John di Martino could have carried the entire weight of the album had he been asked to. The pianist’s work here – as it is whichever album he has been chosen to play on – is absolutely enthralling, perfectly suited to capture the insouciance of Kessler’s vocals. The duet on ‘Moonglow’ is simply glorious.

Much of the credit for the glorious music must also go to James Shipp, whose arrangements are buttery when they need to be, excruciating when the music calls for it and colourfully resonant when moods must soar and occupy the rarefied realm of music. ‘I Thought About You’ is one of those songs that will stick in the mind seemingly forever. Kessler’s own ‘Empty Bed Blues’ is stunning. In it we have music that might be held up as music to live by. Sari Kessler sings these and other music in the repertoire with elegant phrasing, mature intonation all the while glazing the music with textures that are incisive, full-blooded, and thoroughly idiomatic masterpieces. This effort is going to be hard to match – not for Sari Kessler, though. She is a musician and vocalist to watch in the future.

Track List: Walk On By; After You’ve Gone; Why Don’t You Do Right? The Gal From Joe’s; Sunny; It’s A Wonderful World; I Thought About You; The Frim Fram Sauce; Feeling Good; My Empty Bed Blues; Too Close For Comfort; Moonglow.