The British saxophonist Sam Barnett comes to the world courtesy of #jazznewblood, an seminal London organisation founded by photographer Patricia ‘India’ Pascal, and dedicated to discovering new talent from the deepening pool of musicians in Britian. Meanwhile Mr. Barnett had already won a full scholarship sending him across the pond to take a four-year degree course at Berklee School of Music in Boston. But that was after he won the prestigious Mayor of London GIGS Award (Youth Category), in September 2013. He was just 12 years-old. Impressive? Then consider this: at 14 years-old this gifted musician composed this New York – London Suite. But that is only part of why such an achievement ought to be recognised worldwide.

This extraordinary work is one of the most polished works, comparable to anything written by men or women more than ten times his age. Moreover Mr. Barnett offers a refined recital; a cautious but polished studio performance, articulate and atmospheric in its slow second and fourth movements: “Liberty” and “London Meditation” respectively and confident, ebullient and with enormous control of tone and colour in the brisk opening, 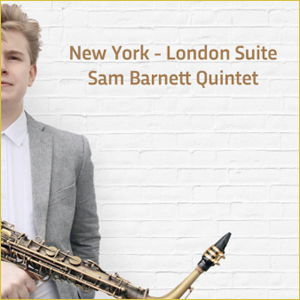 “Morning Shadowplay” and in his oblique homage to Herbie Hancock, “Maiden Flight”. His soaring “Theme for Hope” is confident, graceful and utterly compelling.

Wielding his tenor and sometimes an alto one, Sam Barnett, the suite becomes a white hot volcano of intense expression; it presents formidable technical challenges, all of which are surmounted almost with nonchalance, the saxophonist’s focus resolutely serving the score, not the mechanisms involved in performing it. He has a particularly rewarding sense of rhythm, high-sprung, light and incisive and entirely secure. Throughout the half-an-hour-long performance he cultivates a beautiful, poetic tone, with the other members of his ensemble serving him, each with individual brilliance.

Featuring a marvellous new trumpeter, Laurence Wilkins, a rhythm section of contrabassist Michele Montolli, and Zoe Pascal, the drumming wunderkind, and son of Patricia India Pascal, together with pianist Timur Pak, another musician bristling with talent, Mr. Barnett’s musicians are completely attuned to his vision and artistry. Each of them caresses musical phrases, lines and accents, and sculpting the parabolic inventions of “Morning Shadowplay” and “Maiden Flight” with consummate skill.

All this while Mr. Barnett bends notes and elongated special phrases indicating there’s no semi-quaver that has not been judiciously considered, making this New York – London Suite every step a swinger. So make no mistake: Sam Barnett has much to offer and judging from the point from which he’s taken his first leap of faith, there’s no telling how for this musician will go.