The very fact of being so completely insignificant an entity amid the relative immensity of infinity itself is of enormous significance to an artist of the genius of Roscoe Mitchell. So significant that in the silence and sound of Distant Radio Transmission he seeks to await the response to his musical entreaty, beamed at outer space, from a performance venue – studio or stage – here on earth. It takes all of the glorious complexities of cognition flowing in and out of the walls of the mind that harbour the secrets of intuition to even conceive of beings like [or unlike] us somewhere in space. Mr Mitchell does not hear [or know] them but in his infinite wisdom he anticipates them and therefore can dare to anticipate a response which is the sound of this Distant Radio Transmission. 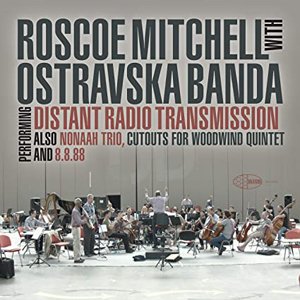 It is first heard in awesome silence and then, as you would imagine twiddling some knobs of a sophisticated amplitude-meter, you would tune in to the broadcast, expecting to hear something but not know what to make of it at first. Then as you become more attuned to the sounds of this transmission, you begin to become more comfortable with it; less suspicious… you begin to try and listen for familiar sounds amid the unfamiliar ones and, who knows, even dare to feel comfortable with the sounds; to begin to suspect that the sounds are speaking to you even if only to your restless spirit. Then, as you become even more comfortable with the uniqueness of this sound it ceases to be strange. Now you get closer and begin to become beguiled by it, to try and decode its message by playing it back in the form of its melody and harmony, using the amplitude of its rhythm to replicate it in a manner so as to make us all enjoy its familiarity and so feel safe with it: as is the case with this recording of Distant Radio Transmission.

Roscoe Mitchell has been, for years, a human being of rare intellect. He is a questing artist, the architecture of whose mind is like a cathedral with naves that stretch, it would seem, from the entrance of his forehead, across the transepts of his skull right down to its rear end. It is – his mind; that is – like a great and endless basilica with aisle upon aisle and transept upon transept. Such is the immensity of this space and so fluid is the access to any part of it that ideas and concepts flow with extreme ease, unhindered by seemingly anything. The result is that almost any thought can produce an idea, which can intersect with another idea so that a most complex matrix of ideas can result in a single piece of music such as what we encounter on scores upon scores of his recordings since he first created notes that have flown off score-sheets since 1965.

As pieces of music – which of course they – every ping of the sopranino and t he harp, every nervy whinny of the strings, growl of trombone and bleat of oboe or of another wind or horn instrument is perfectly placed to contribute to the thick and thin brushstroke with which Mr Mitchell paints or otherwise illustrates a musical idea. Every are of melody, swell of harmony; every knuckle-rap or other hand-sign; every swish of cymbal and thump of a drum contributes to a mystic rhythm. The music is anomalous and amorphous, jagged and smooth as you would imagine a broadcast from a distant star might be, interrupted as it might well be, by the noise of our own humanity. Thus each note you hear here has a very special grace.

Nothing should surprise us about anything that Mr Mitchell continues to produce except, perhaps, that every new work, itself a surprise, is a creation the likes of which we have never heard before. This is why “Distant Radio Transmission” sounds unlike the one we heard when it was first performed by him, together with Craig Taborn and Kikanju Baku in 2013; and likewise with his “Nonaah” [appearing here as “Nonaah Trio”, which was first performed from 1971, and recorded with Muhal Richard Abrams, George Lewis, Henry Threadgill, Joseph Jarman and Wallace McMillan as far back as 1977. The same questing quality and brazen musical audacity can also be listened to and enjoyed on “Cutouts for Woodwinds” and the mystical “8.8.88”. All of this music is directed by him on this remarkable disc and interiorised with idiomatic brilliance by Ostravska Banda, the trio, quintet and Seth Horovitz.

Nothing that Mr Mitchell creates or facilitates ought to surprise us anymore, but everything that he does will always challenge us to look further afield to where new ideas come from – even if these are from interstellar space. Moreover everything from Roscoe Mitchell is to die for…