This is a 2016 recording by a musician – not just a drummer – who was responsible for the sound of one of the most iconic recordings in Jazz. Of course, Jimmy Cobb performed on scores of other recordings after that and, strictly speaking deserves to be remembered for many of those as well especially So Nobody Else Can Hear [Contempo Vibrato, 1983], Cobb’s Corner [Chesky, 2007] and his 2014 performances at the Smoke Club, captured on The Original Mob [Smoke Sessions] and This I Dig of You [2019]. This recording – Remembering U – that was released on his own label Jimmy Cobb World, shows that he was in peak condition and it felt as if he, like Roy Haynes, also had many more years of music in him. But life had other plans… 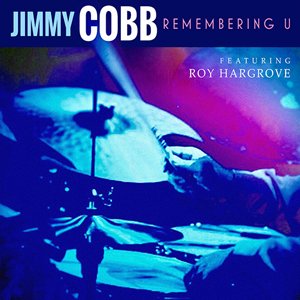 Mr Cobb was well-known for the manner in which he seemed to show extra love for the ride cymbal – his obituary was full of references to that aspect of his playing. This recording – by that other celebrated personality in the music business, the late Rudy van Gelder – makes a little too much of that. Mr Van Gelder had a very idiosyncratic micing style and much was made of it – not all of it adulatory of course. This is borne out by some choice quips including some by one of his first bosses, Alfred Lion. These unusual and unfortunate idiosyncrasies are rather pronounced on what Mr Van Gelder does with his micing of Mr Cobb’s drums – especially with the ride cymbal – on Remembering U. The sound is so pronounced that it sometimes feels like no other brass hardware exists in the drummer’s kit. [Contrast this with the sonic balance achieved on the The Original Mob Smoke Sessions recording]. Ultimately, though, the great music on this recording was almost certainly saved by Don and Maureen Sickler’s mixing as well as by Katsuiko Naito’s mastering.

But, of course, there is plenty of terrific music on Remembering U. Mr Cobb is the architect of it all, building a mighty rhythmic wall, daubed by his characteristic brassy, tick-a-ticking peregrinations of his ride-cymbal which is at the centre of his percussion palette. Using these resonant utterances he draws in pianist Tadataka Unno and bassist Paolo Benedettini who make up the trio on the twelve craftsmanlike arrangements on this album. Mr Cobb winds things up several notches when he invites Roy Hargrove [as well as tenor saxophonist Javon Jackson on his ever-so-elegiac “Eleanor”]. Mr Hargrove has a majestic, vocalastic style of enunciating and phrasing on his horn and everything he does on that song and the music of “”JC’s AC” and “Willow Weep for Me”, on which Mr Hargrove cries softly on his flugelhorn.

Everywhere on the repertoire of this recording there is ample evidence of Mr Cobb’s absolute mastery of the drums. His musicality is sublime, and this is heightened in ballads, such as, of course, “Remembering U” and on the classic “Willow Weep for Me”, where he seems whispering to and caressing his drums and cymbals. Mr Cobb is capable of much delicacy as well as fire as he honours old friends “W.K.” and “Cedar’s Rainbow”, both of which remind us of two other artists that roamed in the celestial orbit of Jazz. And so, once you are able to get past the engineering – which is otherwise quite rich in its warmth – there is much great musicianship to be seduced by and Mr Cobb is – as always – at the heart of it.