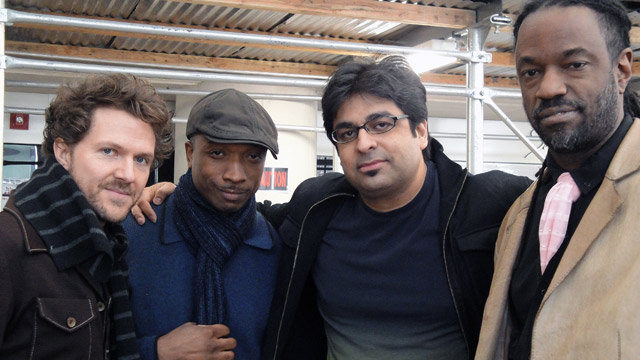 Not since Herbie Hancock released The New Standards (Verve, 1996) has there been an album of new standards so exquisitely crafted that the standards themselves have been endowed with a new legitimacy. Not since that Herbie Hancock album has this happened as Intents and Purposes by the Rez Abbasi Quartet shows. Also—and not surprisingly so—there is a new respect for Rez Abbasi. The self-effacing guitarist has reinforced the idea long held by cognoscenti that here was a musician of considerable talent. His gift for reinventing music melodically, harmonically—and especially—polyrhythmically as well is a breathtaking one. Rez Abbasi is in the unique position of having a deep knowledge of the music of the Indian sub-continent. This sojourn has had an elemental effect on his music. Indian music is passed on from guru and initiate mathematically as well as philosophically and you learn to count complicated rhythmical cycles as well as to explore the metaphysical relationship between music and its role in the universe. You learn that melodies and harmonies are shaped the unique rapport between the notes and sounds of the cosmic aural palette. Mr. Abbasi’s music has been uniquely shaped by this experience. 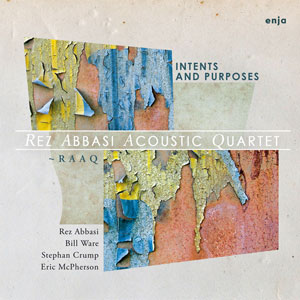 The veena’s beautiful drone and the mystical glimmering, and jewel-like jawari of the sitar find an echo in the distinctive melted buzz of Mr. Abbasi’s guitars. He has an intuitive sense of which of the three instruments he has in his armoury best matches the sound design of each song. The steel-stringed guitar that he uses in Tony Williams’ “There Comes A Time” and the baritone guitar for “Butterfly” are poignant examples of how Mr. Abbasi can plumb the depths of his instrument. His playing is often soft and silky despite the pervasive buzz that informs his long, loping linear melodic lines. They tend also towards introversion. Yet put two such lines together and something magical happens within the tensions they engender. The instruments’ equalising dynamics matches him in essence and aura. His softly singing, sweet and tender tone is buttressed by a sinuous attack that manifests itself every so often. “Medieval Overture” is a classic example of how he can change from gliding phrases almost politely played to an untrammeled onslaught in one mercurial set of lines.

The rest of the musicians’ reactions to these emotional currents governing the expansion and contraction of phrases are unflinchingly dramatic. You can hear this in the declamatory sustain of Bill Ware’s vibraphone. Mr. Ware often plays foil to Rez Abbasi’s softly humming guitar. Not only does breath equal magnitude here, but it also includes an expressive profundity. We witness here two individuals who speak often as corporate souls. Tenderness to turbulence, the frames of mind or spirit alter and are neither ignored nor glossed over. Instead they are intensely felt and candidly declared, through dynamics spanned across the musical elasticity, tenpin stretched and snapped back and forth into a pulse that never sags or loses grip. Even though the bassist Stephen Crump and drummer Eric McPherson do not seem to play as important part in the relationship they are in fact part of the four-way polyphonic and polyrhythmic cartwheels that each musician performs through every song. Theirs is a shared experience of audacity and spirituality in this richly rewarding album.

Born in Karachi, Pakistan, removed at the age of four to the vastness of Southern California, schooled at the University of Southern California and the Manhattan School of Music in jazz and classical music, along with a pilgrimage in India under the tutelage of master percussionist, Ustad Alla Rakha, Rez Abbasi is a vivid synthesis of all the above stated influences and genres. Read more…