Randy Brecker has enjoyed a stellar career in contemporary music for over five decades. To the impressionable eye, the trumpet playing Mr Brecker may have lived in the shadow of his older brother, Michael – in the earlier part of their career, in Blood, Sweat & Tears and then in the Brecker Brothers Band. However, if you were paying close attention to his music even through those bands – and later with Art Blakey and The Jazz Messengers, Horace Silver and, of course, with the Jaco Pastorius’ Big Band Mr Brecker was blooded into an undying shooting star in his own right and with the ferocious power of his gilded trumpet, he blazed a musical trail with energy, great intellect and intuition.

An aspect of Mr Brecker that is rarely talked about and shared is his prodigious gift for composition. His work – like his playing – is raucous and loud. He is by turns savage and mournful, joyful and lyrical and he has a penchant for large-scale forms. His seduction by Brasil during the 1980’s and the vigorous – and tender –dance and song of the South American nation left a lifelong imprint on his soul; and consequently on his music as well, and the evocations of Brasilian music colour his compositions – not only in the robust, rhythmically punctuated works, but also in the deep longing of his ballads.

His playing is crisp, precise and guileless. He also maintains – especially in his slower material – a beguiling softness of hand (and finger-work) and impressive control of speed and tone. But there is never a clatter with his playing because when notes are flying his quick technique always gives him time to let them sing. Best of all, he has a whistle-clean

tone which is not only showcased in the bright, high register with an ever-wild temperament that makes his rubato more daring and his rhetoric more imperious. He is also strongly sonorous in ranges down below and this is true not only when he is playing the naturally softer flugelhorn but also the trumpet.

Now in his seventy-third year, Mr Brecker shows no signs of slowing down or even tempering the fiery and soulful tone of his horn as he continues to pronounce notes and gilded phrases loudly and yet gracefully. Ten years ago he found a new tenor saxophone-playing soul mate in the form of wife and co-conspirator, Ada Rovatti. Although nothing can replace the empathetic voice of his brother, Miss Rovatti has added a dynamic new palette of sound to the Brecker-Rovatti partnership and this is clear from both 2019 recordings – the one with the NDR Bigband as well as with the smaller ensemble co-led by Miss Rovatti. 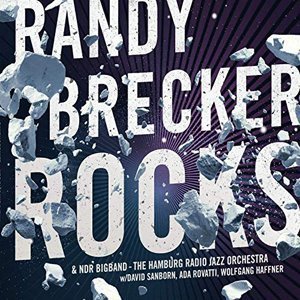 Randy Brecker and the NDR Bigband: Randy Brecker Rocks There is fire and verve and poetry in this recording with the famed German big band, a large group of musicians who play with great virtuosity and intuition fully up to the task of following Mr Brecker’s emotional contrasts and the grandeur of his conceptions on Randy Rocks. With polished reading the members of the big band are able to perfectly communicate the music’s urgency and interpret its highs and lows with an almost magical palette of tone colour. The soloists – which include Miss Rovatti on both tenor and soprano saxophone, David Sanborn on alto saxophone together with members of the big band – all rise to the occasion and respond with ease to all the technical difficulties that Mr Brecker’s work throws at them.

Meanwhile every piece here is played by Mr Brecker with fire and a kind of languid ease, each melodic variation following the other, quite inexorably, his high and mighty tone brilliantly offset by the playing of the other soloists and the ensemble – all of which is brilliantly caught in this fine recording. “Pastoral” and “Sozinho” are powerful and enduring melodically, harmonically and rhythmically as well. But every other track shows that Mr Brecker is every bit the swinger he always was. Make no mistake the trumpeter still has a lot to offer. 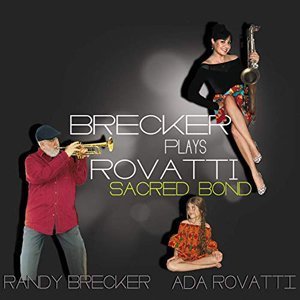 Randy Brecker and Ada Rovatti: Brecker plays Rovatti – Sacred Bond How about Sacred Bond for a complete contrast to the big band recording. For one, Mr Brecker steps aside as a composer and features the work of his composer and saxophone-playing wife, Ada Rovatti. As a result the recording is memorable not simply for Mr Brecker’s brilliant playing, but explodes with the genius of his wife’s work both as a writer and a saxophonist as well. Featuring beautifully crafted arrangements of beguiling variety and sensuousness in every lovingly-crafted phrase Miss Rovatti shows that she is an artist of the first order – not only in the manner in which she puts notes to paper, but also in the manner in which she then makes those same notes fly off the page with her inspired playing.

Listening to the way in which she the bends on “The Queen of Bibelot” and “Quietly Me” and, how Mr Brecker, for his part, sculpts the long, sustained inventions of “Sacred Bond”, it is clear that there’s not a single semi-quaver that hasn’t been fastidiously considered by the trumpeter and tenor saxophonist. The group also features long-time associates – pianist David Kikoski, keyboardist Jim Beard as well as bassist Alexander Claffy, drummer Rodney Holmes and the great Brasilian percussionist Café da Silva, with guitarist Adam Rogers joining in the festivities on three charts. Clearly these musicians are completely attuned to Miss Rovatti’s and Mr Brecker’s artistry. Meanwhile their ten-year-old daughter, Stella makes her debut with her wordless vocalastics on “Sacred Bond” closing the circle, so to speak, on two generations of Breckers music.